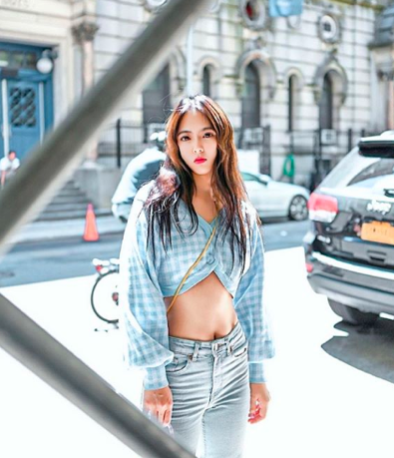 The fashion modeling industry in the United States is one of the most elite ones around the world. Extensive struggle, heartbreaks, failures, giving up, and restlessness is part of this industry. There is no denying there; succeeding as a model in the United States is not an easy job. It takes months, years, and even an entire lifetime to make a name here.

Having a photogenic face, a beautiful body, exquisite facial features, and possessing a sense of style are critical for the success, but other crucial factors determine whether a person will make it as a top model in this sector or not – determination, passion, and consistency.

While there are many women who land on the perfect opportunity but lose the spot just because of inconsistency, landing on the perfect opportunity is not easy. Hundreds and thousands of American women try their luck in the industry every day, but not many are able to make it to the top. But there is one Chinese model, who not only found her way into the industry unexpectedly but firmly grabbed the opportunity while remaining consistent throughout.

Amber Wang, a 24-year-old entrepreneur, and the CEO has made a prominent identity in New York’s modeling sector. She did not grow up dreaming about becoming a top model, and she did not even know that modeling was something she wanted to pursue as a career. Serving as a CEO and a top model is tough as both professions require time and effort. Professionally known as Zhaoyang Wang, she is a strong and powerful woman who succeeded in such diverse careers.

The Beauty of Surprises in Life

Zhaoyang Wang came to the United States at the age of 15 to pursue her education. After completing her high school education from Calvary chapel Christian school, she entered Wilkes University, which she attended for just one year.

After dropping out of college, she returned to China and established Warrior Education, an English training agency. She tirelessly worked to stabilize her business, and she was able to establish a network of more than 30 high schools. Amber became a CEO at the age of 19.

She became a successful entrepreneur and then returned to the United States to complete her education. The young entrepreneur and CEO graduated with a degree in the communication of art and science from Penn State University.

Amber was still studying when she unexpectedly landed on a modeling gig. It happened when she was hanging out with her friends at the mall, and a modeling agency spotted her. The brown-eyed girl who was in the country to complete her education never thought how a visit to a mall could turn her life around like this.

The way Amber Wang landed on her first modeling gig proves that the unpredictability of life makes it beautiful and worth living. Being spotted by a modeling agency at a mall and to the point where she became the first Chinese model to become the cover page model for Pump Magazine, Amber stayed consistent.

Even though being a model never crossed her mind, but when she finally came across her destiny, she stayed determined, passionate, and consistent. Amber Wang, who took up a professional name, Zhaoyang Wang, appeared in the elite model look competition in 2019. It provided her the exposure that was needed for her to excel in the industry.

Her fame on social media led her to Wilhelmina Models, where she was invited for a shoot by James Farrell, a well-known sports photographer. After the shoot, Zhaoyang began her search for other opportunities, and she finally got an internship at the New York Fashion Week 2019, something aspiring models and fashion models dream about.

A Sneak Peek into the Present

As of 2020, Zhaoyang Wang serves as the CEO of Warrior Education, along with this, she has been featured in a number of high-end magazine campaigns. Some of her works include ad campaigns and shoots for the 35th issue of Shuba Magazine, 6th issue of Luxia Magazine, COVID-19 Time campaign of Elegant Magazine, and has been hired as a cover page model by Pump Magazine. Zhaoyang Wang was also invited to the New York Fashion Week 2020.

Zhaoyang Wang is just 24 years old, but her success as both an entrepreneur as a model in the United States modeling industry is praiseworthy. She is a passionate woman who has clear life goals with a vibrant, humble, and strong personality. These factors have helped her establish a strong identity in one of the most competitive modeling industries in the world!

Young fashion designer Hetal Desai says, I am looking forward to experimenting more with my designs