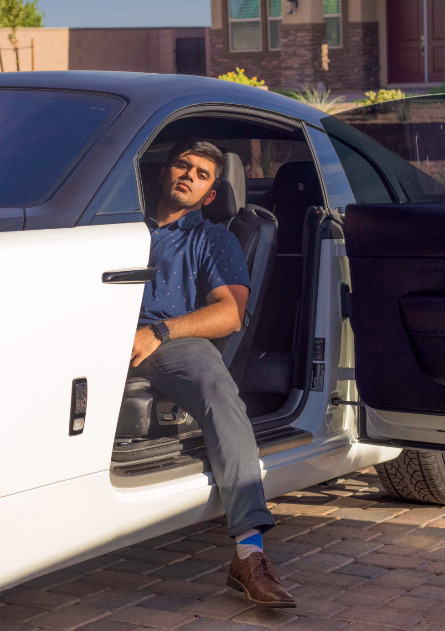 Descending from a country with less opportunity, Naveed Mian, established himself as an American businessman, entrepreneur, and talent manager. At age 19, he started creating a legacy through his fortune from the stock market and with his many business ventures. He is a co-founder and board member of start-ups, and companies from numerous sectors, ranging from construction to technology all while being a business student at Howard University and Howard Community College. He has a vision for not only himself, but for the people around him and for the future.

“My goal is to build a lasting generational legacy. But most importantly, I want to be the man who changes the world for not only myself, but for the people around me and for the future we all look up to.”

The young entrepreneur comes from a family that migrated to the United States from Pakistan in the early 2000s. Naveed Mian was born on January 7th, 1999 in Gujranwala, Pakistan. Soon after his father moved to the United States to achieve the American dream for him and his family. Although Naveed’s father had a degree in finance from his country, he was faced with many hardships and challenges due to discrimination against immigrants. This added substantial difficulties and small obstacles to his ability to succeed in the U.S. Naveed’s father started working numerous jobs to support himself and his family, who were still back home in Pakistan. Working day and night, Mr. Mian was able to relocate Naveed and his mother to the U.S., when Naveed was about four years old.

Around 2006, Naveed’s father established his trucking business in Maryland, paving a hopeful road for the family. The Mians bought their first home in the U.S. a few years later, unfortunately just as the 2008 financial crash was approaching. During this time, Naveed’s family faced their own financial crisis. At the age of nine, Naveed experienced something no child should experience at such a young age. At the footsteps of his door, Naveed was given a legal pre-foreclosure notice by the bank while his parents were away. Invoking a mixed feeling of fear and curiosity, this would forever be a turning point in the yet-to-be entrepreneur’s life. That very moment, Naveed decided to learn about the intricacies of the stock market and the financial sector. Following in the footsteps of his inspiration – Warren Buffett, he started reading countless books to gain knowledge about economics, finance, banking systems, and the stock market.

“Every day after school, I would spend some time in the library teaching myself things that a normal kid my age would likely never be teaching themselves.”

Like Jeff Bezos, he asked his parents for a small loan, but for the stock market. With a rough beginning, soon Naveed- the investor, was churning profits more than his college professor’s salaries. His wise decisions combined with unique strategies allowed him to not only pay off his debt to his parents, but also earn financial independence at the age of 19. However, this was not enough. He wanted to go beyond being an ordinary investor or a businessman; he wanted to become a person who could create an empire.

“The stock market gave me a great start to life and I’m still heavily invested in it but a true investor is a person who can diversify his portfolio outside of just wall street, I wanted to do just that and I did.”

The Investor and Entrepreneurial Businessman

Once Naveed became an expert investor in the stock market, he expanded his work into other areas. He saw an opportunity in different sectors and started assisting businesses in their creation and development by utilizing his knowledge of fortune 500 corporations, their fundamentals, infrastructures and ideas of adaptation. He helps and supports numerous companies in their growth, marketing, business strategies and vision. Additionally, he is also a co-founder and shareholding board member of a few start-ups, one early start up called Adapt Media Solutions. The original fundamental of the company was to serve the needs of the business sector. It offered a unique membership-style service for content creation and distribution for businesses. The goal of the company was to change the way businesses utilized technology in the changing media world. The company has now expanded to other areas.

“I want to be known as the man who creates unique opportunities and I want to create things that last beyond age.”

As of June 2020, Naveed has also co-founded Cementeros United LLC, which is a key component in the construction, concrete, paving, and landscaping business. His other venture includes SkySoar Entertainment, where he is a second majority shareholding investor, board member and head of business development and marketing. SkySoar Entertainment works with several popular influencers, artists, record labels, and brands.

The Hunter of Talent

A few months after making it big in the stock market, Naveed developed an interest in talent management. He saw his friend Bryce Hall emerging quickly as a YouTube sensation earlier on in his life and developed a unique interest in celebrity careers. Naveed became interested in the strategies they used to achieve popularity and learned from their success. He studied careers, YouTube channels, and content creator’s personalities. Naveed studied what worked and what did not. He wanted to know the world he was entering before he entered it. Naveed applied this knowledge towards his own personal life and the lives of some of the most known social media stars. He contributed to the success of Different Culture by lending his helping hand before the channel was discontinued. He has also worked and collaborated with Soloin, Brittanya Razavi, The Great Khali, King Vader, Juhahn Jones, among many others.

What the Future Holds

Just like the people Naveed looks up to for inspiration, he himself will soon be one. At just 21 years old, he is making a name for himself that most people his age only dream of. He is an investor, board member, Hunter of Talent, and a young start-up scholar, whose name has already started circulating around Silicon Valley and the small business world. Soon Naveed will also be a published author as well. His upcoming book “Generation Z: The Rise of Media”, with co-author Soloin, talks about the media world and its evolution through generations of change. He hopes to educate people about the historical context of the media and its evolution, through his knowledge and research.

Naveed’s story is just in its infancy phase, so there is much more to come. He will not only build a legacy for himself but for the people around him, especially his family. Naveed is surely racing rightfully towards his goals and Fortune 500 dreams. There is no doubt he will leave a mark that reaches miles and seas.

“I want to see a future where I can tell my kids I was a part of the history that made something happen in this world. Aging with time and dying in history is not an option for me.”