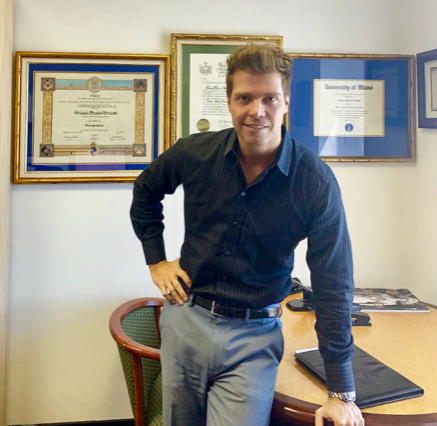 During the last week, and after the show “Le Iene”, a comedy/satirical program broadcast on the Italian channel Italia 1, the Italian media have talked a lot about Gianni Mendes and his “misadventures” with an Italian social media manager defined “The Guru of Instagram”.

But…who is Gianni Mendes? The name of Gianni Mendes is not foreign to the social media world. The vibrant and lively personality has been known throughout the world as an Instagram influencer for quite a while.  But behind the 70,000 following, there is more to Gianni Mendes than the social media bring to light. It might come off as a surprise, but the owner of a jolly and entertaining personality is also the immigration lawyer of the VIPs.

Born in Sao Paulo, Brazil, but raised in Bologna, Italy, the multi-talented Gianni Mendes opened his eyes in a family of artists. Even his father was a guitar player, an “aficionado” of Flamenco, who spent time with a group of artists, including Sabicas, Andres Segovia, and Felix de Utrera, the famous Flamenco and Classical guitar players at the time!

Of course, the young boy picked up the passion and drive to be a part of the music industry from his father. He started playing the guitar when he was just ten years old. After spending extended periods in Spain, Mendes became one of the very few students of Flamenco maestros Manolo Sanlucar and Enrique de Melchor.

Even though the love for music and zeal to perform for large crowds had a place in his heart forever, the young Mendes still dared to dream of doing something much more powerful and daunting. And that’s when he stumbled upon pursuing the career of a lawyer.

In 2002, Mendes completed his Juris Doctor degree from the University of Bologna, Italy, the same year when he released his first album “Colores” with Enrique de Melchor. The album gave him the motivation he was looking for. But still, Mendes left for Miami, United States, a year later to complete his master’s in law, from the University of Miami.

A couple of years later, Mendes gave his bar exam and cleared it in 2005, with a specialization in immigration. The enthusiastic lawyer had applied in several law firms in various parts of the U.S. Still, things didn’t quite work out in his favor until he received a call from a well-known litigation law firm in California. The firm had acquired his resume online, referring to him as the “perfect fit” since they had been on the look for an Italian American lawyer. Within a week, he successfully filled the position in Los Angeles to work on a temporary project, marking the start of a stellar career. As per Mendes himself, “The experience at my first job was amazing. Those were the best days of my life!”

Working hard and giving his best at all times also popped an idea in Mendes’s head, and that is when he decided to launch his own law firm.  In 2009, Mendes gathered his best friends, and they co-founded an Italian-American law firm, TLRT (an acronym for Tosolini, Lamura, Rasile, and Toniutti).  Here, Mendes was appointed as the head of the immigration department. Since then, he has worked with some of the most accomplished Brazilian and Russian models, national and international modeling agencies, top 500 Fortune companies as well as entrepreneurs investing in multi-million-dollar deals.  He has also represented Golden Globe actors and movie directors, Grammy awarded Latin popstars, multi-awarded classical musicians, European and South American top league soccer players, NBA basketball players, Olympic medalist athletes, Nobel nominated scientists, and the list just goes on and on!

Working for more than 15 years in the industry as a lawyer and representing “big names” of the entertainment industry helped Mendes to establish good relations with a chain of celebrity stars. Some would call Mendes “lucky” since his job as a lawyer also helped him to stay connected with his second passion, music.  Even though Mendes had invested a lot of time in building a remarkable reputation in the field of law, the determination to shine distinguished in the music industry wasn’t left behind. And that is when he decided that it couldn’t be put off any longer.

For the next few years, the brilliant mind spent his time creating content for media platforms, ergo earning a huge fan base. Let’s not forget Mendes’s masterpiece mannequin video! Casually entering the Zara store in 2017, Mendes thought of something mischievous, and he stood on a spot just in front of the escalator, pretending to be a human mannequin. What gave the shoppers something to laugh over, proved to be something much more than a colossal joke!

As of today, Gianni Mendes, the lawyer and entertainer, is working on the release of his first Latin-Pop single, “Te Amaré,” whose music video will feature Candela Marquez, the renowned Spanish soap opera actress.

The song is an inspiration from Latin and Brazilian rhythms, and it has been composed by Gianni Mendes and produced by Tim Mitchell, the multi-Grammy producer of Shakira. The song will also be featuring other recognized artists as well, including Lee Levin at the drums and Guillermo Vadala at the bass.