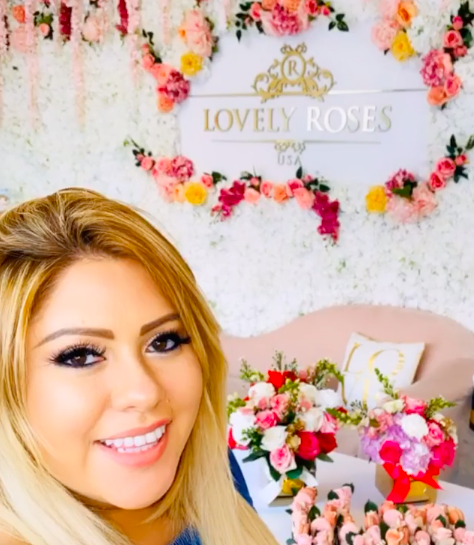 Everyone dreams big. But not all can achieve it. There are few who have the dedication and consistency to achieve their dream. When Erika Mejía, a Latin immigrant from Honduras, came to Florida, she had only a few dollars in her name.

She worked several jobs, sometimes as secretary, sometimes as a domestic worker. She also worked as a saleswoman and a shop assistant. During working several jobs, she realized she did not want to keep working for others for the rest of her life. She wanted to make something of herself.

And soon, Erika became fascinated with the floristry trade. She tried her hand at it and dedicated herself to the art. Soon she was able to create beautiful art pieces through the use of flowers. Erika Mejía (@erikamejia_oficial) recognized her talent and wanted to do something about it.

So after years of hard work, she opened her florist shop called “Lovely Roses” in Miami. Erika was an immigrant with no money, just a drive to succeed. Her blood, sweat, and tears helped her create a business from scratch.

Now, she caters to the A-listers of Hollywood like Camilla Cabello, Luis Fonsi, and Demi Lovato. Erika became a sensation in the Latino community in Miami. She is well respected and often looked up to by many. Erika is a burning example of what a hardworking person can achieve.

Even though she has succeeded in her life, Erika respects her roots and adores her family. It is her family that inspired her to achieve her dream. Erika Mejía is also open to helping anyone who wants to open a florist shop and share her knowledge with them.

How Shadowbox Can Turn You Into an Influencer Over Night