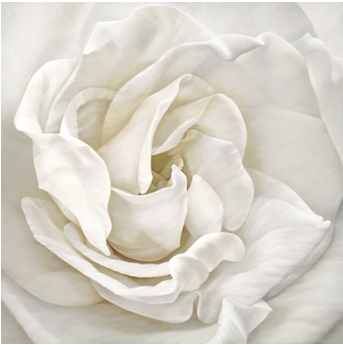 Colors frame the world. They have different meanings to different people and even different cultures. They have a strong impact on people’s emotions, perceptions, spiritual and physical wellbeing.  Each color has multiple aspects to its character.

White is the addition of all other colors. Among its meaning are purity, innocence, light, safety, brilliance, understanding, faith, beginnings, sterility, spirituality, possibility, humility, sincerity, protection, softness, and perfection.

Deborah Bigeleisen is an artist who, beyond any doubt, understands the meaning of color. She has the skill and artistic ability to use color to create an emotion, a mood, or an atmosphere.  She has been drawn (no pun intended) to colors, particularly white, as a primary expression of perfection in her depiction of flowers.  Her evocative paintings dazzle the viewer with larger-than-life, single images of a flower, in styles ranging from hyper-realist to abstract. Her predominant subject is roses, but gardenias, lisianthus, lilies, hibiscus, sunflowers, and orchids have been the subject of her artistic portraiture.

The Impact of White

The predominant color in many of Deborah’s paintings is white, having symbolic meaning to her on multiple levels. White represents a blank slate, a fresh start, a new beginning – all that Deborah has encountered multiple times over her lifetime.  White represents a new canvas, ready for a burst of creativity and the unpredictability of what lies ahead. White symbolizes light, illumination, goodness, spirituality, and perfection, characteristics that impact Deborah’s artistic achievement and reflect her outlook on life.

Flowers have been the primary subject throughout Deborah’s creative endeavors, from collages in childhood to her penultimate career as a printed fabric designer to her ultimate career as a world-renowned artist. Early in her painting career, she explored different styles from impressionism to realism and genres from still life to ‘Rembrandt-like portraits’ of a single image. Deborah states, “realism struck a chord inside me; I found it emotionally satisfying to capture the essence of a single image of a flower’s outward beauty from a realistic approach and to bring forth the inward essence of its spirit. At this juncture, I discovered a voice inside that I never knew I possessed.”

Deborah goes on to say, “flowers are truly in my soul. Whatever the genus, I research it thoroughly, becoming intimately connected with its characteristics at every stage of its life cycle.” Finding inspiration from the petals of a dying lily led to her conceptual “Multiple Perspectives” series of almost 40 paintings. Research has taken her to botanical gardens all over North America, including her favorite, the spectacular Butchart Gardens in Victoria, BC, with over 300 varieties of roses. She spent time photographing at Rose Hill Cemetery in Los Angeles. Its magnificent rose gardens, including its famous Iceberg roses, led to some of her iconic, award-winning paintings, including Energy 3. 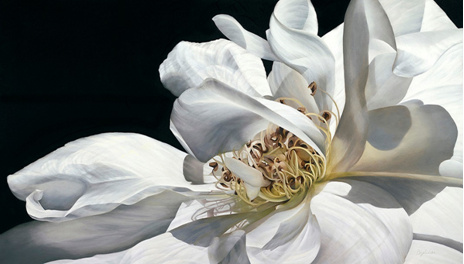 Two years into her career, roses became her primary subject.  A gallery owner commissioned several paintings of white roses.  Concurrently and serendipitously, a teacher introduced her to the painting style of the Dutch master artists of the 17th century. He knew that Deborah had the innate talent and patience to execute these labor-intensive techniques: applying many translucent layers to achieve incredible depth and richness in the shadows while at the same time producing vibrant luminosity in the highlights. Upon delivering the first three white rose paintings to the gallery, they sold in 10 days. A career was launched. At this point, another mentor noted that in his 30 years in the art business, he had never seen a floral artist capture the essence, the character, and the spirit with the voice that Deborah gives her subject.  He encouraged her to paint at least thirty additional white roses.  He wanted Deborah to establish an identity, a brand, noting that most artists painting nature tend to lack focus.  She concentrated her efforts in this direction, going on to paint more than 60 white roses and upwards of 150 roses in all. The colors were primarily white but also included red, yellow, and peach, but she also rendered more abstracted visions in neutral tones of beiges and grays.  All were in multiple styles ranging from realism to non-objective. Deborah subscribes to Rembrandt’s philosophy, “love what you paint and only paint what you love.” 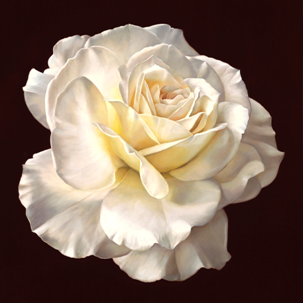 The voice that Deborah gives to her flowers has given her work distinction in the fine art arena.

According to gallery owner Gary Haynes, “Deborah is one of the finest living realist painters working today.” Art critic Jean McKig wrote in the Desert Sun: Deborah’s portraits of flowers “attain the feeling of a family portrait.” As art journalist Joyce Korotkin stated: “Deborah’s paintings bring a unique vision to the floral genre to embody a contemporary world.”