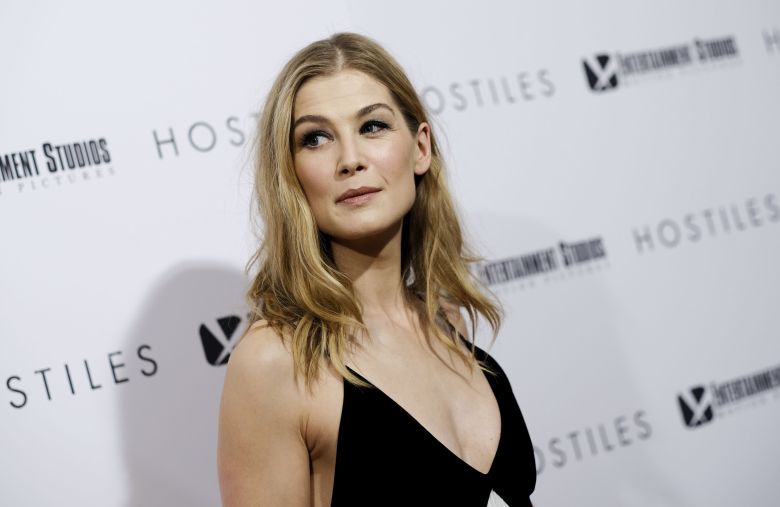 Actress Rosamund Pike has revealed that she buries her acting awards in her back garden.

Speaking on The Ellen DeGeneres Show, she said the ritual was probably “deeply psychological”. Also, it’s linked to “some deep-lying imposter syndrome”.

Last month, Pike won best comedy actress at the Golden Globes for her performance in I Care A Lot, which sees her play con-woman, Marla Grayson.

It added to her Emmy win for best actress in 2019’s State of the Union.

She told Ellen she found awards an “uneasy thing to display in your home”.

Discussing her recent Golden Globe success, Pike, who had previously been nominated at the ceremony for her turns in 2015’s Gone Girl and 2018’s A Private War, said her win came as a surprise.

“The odds were not in my favour,” said the British actress, who beat performances from Maria Bakalova, Michelle Pfeiffer, Kate Hudson and Anya-Taylor Joy to take home the prize.

Pike added that she hopes the future owners of her home will discover the statuettes “when I’m dead and gone”.

“They’ll think they found buried treasure. They’ll have found a host of awards. Moreover, they’ll be centuries ahead and probably won’t even have them anymore; They’ll be relics,” she said.

Pike, who is currently living in Prague, may well have to dig up more of her garden, as I Care A Lot is tipped to be among the nominees for this year’s Oscars, due to be announced on Monday.

She was last a best actress contender for Gone Girl in 2015. But ultimately lost out on the night to Julianne Moore’s performance in Still Alice.

What is impostor syndrome?

Rachel Buchan, a psychotherapist, describes impostor syndrome as an internal belief that makes us think we are not good enough or don’t belong.

She explained that the feeling is most commonly found in the workplace. Moreover, it manifests itself in other areas of life like social situations.

It can affect people of all backgrounds, she says, and emerges for various reasons.  It can include someone’s upbringing, background and specific circumstances at the time.

Jennifer Lopez and Alex Rodriguez call off their engagement