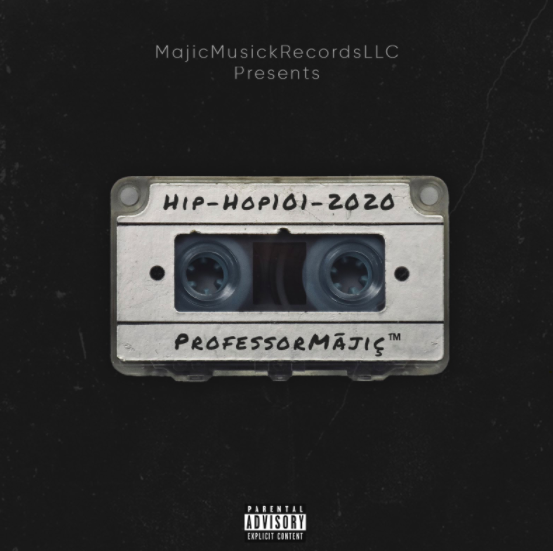 Professor Majic is the freshest new face in the music industry today. With his unique mix of hip-hop and R&B with a rugged twist of speed and diversity, he is gearing towards captivating the hearts of a broad range of audiences.

His early years of dabbling in music were inspired by a friend and local rapper going by AQZ, who served as his mentor. With ten years of songwriting under his belt, he creates Spanish and English tracks with a Latin twist of lyrical, intellectual expression, with an effort to minimize profanity.

An album trilogy will mark the beginnings of his career as Professor Majic ventures in the music industry. The first one is titled Hip-Hop•101-2020 and is already in the later phases of post-production, preparing for its release. The second and third albums, Hip•Hop°Evolved and Eye°am°Hip•Hop, respectively, are already in the works, and are planned to be released in conjunction with the launch of his clothing line.

With the stylized name MājïÇlöthïñg, this line will represent a free independent spirit with a style of Rawthentic West Coast Mic Checker. It will innovate the way the public utilizes their everyday clothes. This clothing line is only the first step to creating everything Majic.

Professor Majic is also the founder and CEO of MajicMusickRecordsLLC, a company established only in May 2020. This company operates with the philosophy of “Dream, Work Hard, Acheive, Repeat!” and aims to diversify and cover a wide array of products and services, including Mājïç Motivation, Mājïç Marïjüänä, and MājïçMïçPromotes.

MājïçMïçPromotes will be the division to focus solely on artist promotion and the effort to help young and upcoming artists to build their brands and establish their reputation in the industry. Being an upcoming independent artist himself, he firmly believes in young and talented individuals’ ability to achieve their dreams.

Having grown up in not-so-ideal living standards, Professor Majic hopes that, through Mājïç Motivation, he will be able to mentor youth and provide guidance for those who struggle with addiction and alcoholism, the same things he battled in the past. A well-spoken, dedicated, and self-driven individual, he aspires to inspire people through his work.

He has overcome his life’s challenges and now serves as an inspiration to many. A beacon of positivity, he inspires people to strive towards greatness despite hardships. Today, the world faces unprecedented events that affect all aspects of life, but his family continues to support one another despite difficulties. A symbol of his appreciation for his family, a screenplay depicting his parents’ lives, and his older siblings is currently in the works.

Professor Majic is a man aspiring to spread positivity and contribute to the world one step at a time—starting with his family and eventually branching out. Keep up-to-date with his latest activity by subscribing to his channel on YouTube.

Haitian Artist, Jahn Don, has Released a Music Album with a Mix of High-Energy and Slower Tracks