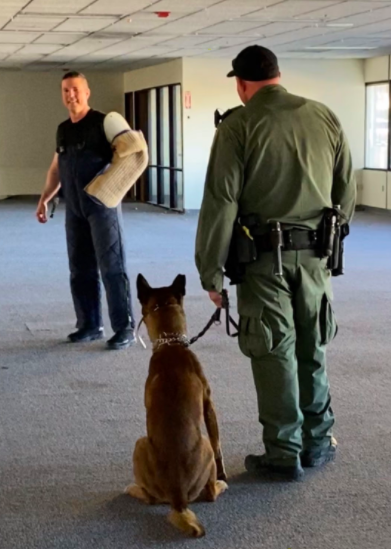 When it comes to being a responsible citizen, Nami Oneda takes all the chances she has to spread awareness and fight against stigma in the community. Oneda is on her way to being a voice against the most common stigma against the Law Enforcement. She hopes to do this with the use of books and a non-profit organization.

At a time of crisis and turmoil, Nami Oneda chooses to educate fellow citizens and defend police officers. Starting with herself and her avid fondness for dogs, Oneda researched the entire K-9 unit’s service. She gained more on the lives of these specialized groups of law enforcement officers, their training, ride-alongs, interviews, and the Las Vegas Metropolitan Police Department’s (LVMPD) statistical reports. Upon further exploration, Oneda also learned the integral role of the K-9 unit in saving lives to the success of the entire LVMPD.

She became fully aware of the commitment involved in being a general police officer and how society has been giving little or no appreciation to these people. Going behind the LVMPD K-9 unit scenes, Nami Oneda published her book entitled Dog Teams: Of the Las Vegas Metropolitan Police Department K9 Section. This book hopes to touch dog lovers’ lives and help them understand their importance in defending the nation. She also hopes for everyone to grow a sense of gratitude for K-9 handlers in their training and building relationships with canine heroes.

Unlike other books of the same subject, Dog Teams: Of the Las Vegas Metropolitan Police Department K9 Section is written from the perspective of a civilian reaching out to the general public. Having no experience or background in law enforcement, the book by Nami Oneda is written with an open mind without a bias. It brings attention to the respect and appreciation law enforcement officers deserve for risking their lives to protect and serve the community.

With her book’s publication, a few law enforcement officers expressed their joy at having someone be the voice of people in their field, especially at such a time where animosity toward them has amplified.

Having spent most of her life in New York City, Nami Oneda witnessed officers getting cuts, wounds, and shots while trying to live by their duty — a reason for growing inspiration toward these people’s heroic acts for the betterment of everyone. There is no better time to give these officers strength and payback for their services than now.

Supporting them behind the scenes is not enough for Oneda, leading her to advocate publicly. In 2018, Nami Oneda established The Gratitude Project, which intends to honor and thank those who protect and serve communities. In line with this, Oneda started the Hidden Heroes Gala to acknowledge commitments and acts done by people who make the world a safe place to live in. Its success led to the partnership with LVMPD Foundation as an annual celebration that uplifts heroes’ spirits.

Oneda hopes to connect to more people to honor people with badges. These are the people trying their best to ensure a safe environment for citizens to live in. Discriminating and generalizing law enforcers people as racists and murderers cause hurt to officers that work with integrity. Law enforcement officers, both humans and animals, need strength and admiration for the services they provide.

Learn more about Nami Oneda by visiting her website.

Williano Da Boss, Emerging Hip Hop Talent, Pursues His Passion in the Name of a Loved One Gone Too Soon

Hip Hop Indie Music, a Home for Aspiring Artists and the Like Aiming to Make It in the Music Industry