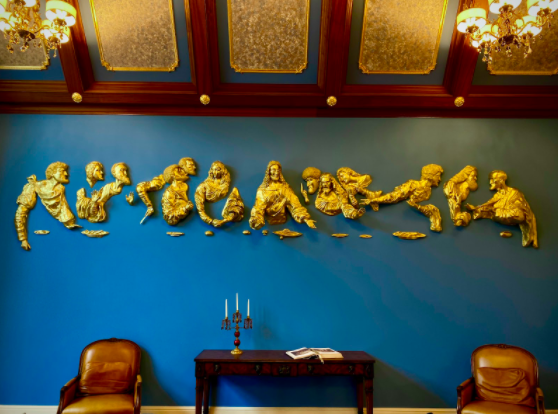 When painting becomes a part of the conversation, some people will connect this form of art to world-renowned painters who have impacted the artists’ community. And more often than not, some aspiring painters even take inspiration for their techniques from those who have left traces of their greatness in the realms of painting and creativity in the arts.

One such figure whose methods have continued to evoke diversified feelings is Leonardo Da Vinci. With his unique and mysterious ways of creating art, many artists have tried to unlock the secrets of his prestige. And taking a cue from Da Vinci’s seemingly undisclosed prowess, Nemo Intelligere seeks to showcase the well-celebrated painter’s enigmatic identity through telltale sculptures.

Nemo Intelligere, also known as ‘Nobody No-one no1’, has dedicated his life to embodying the art of Leonardo Da Vinci through his works. Mostly known for his life-sized sculpture of Da Vinci’s last supper, Nemo has continued to breathe life into the works of the well-remembered artist. And as he continues to explore Da Vinci in his most vulnerable times, Nemo firmly embeds his life’s works to the mystery of Da Vinci’s untold techniques.

As a modern-day painter with a renaissant heart, Nemo Intelligere retells the revival era in sculptures that genuinely reflect one of the most illustrious periods. Nemo chose to celebrate the renaissance period because nothing is more revealing of man’s artistic finesse than the time when they decided to reinvent their identity as an individual and as a whole. And having been passionate about Leonardo Da Vinci’s works for as far as he can remember, Nemo Intelligere focuses his artistic pursuits in presenting Renaissance-inspired art by translating Da Vinci’s paintings into equally breathtaking carved models.

With the grace of his passion, patience, and unparalleled skills in shaping magical things with clay, Nemo Intelligere first made waves in the art community with his divine chiseled rendition of Da Vinci’s Last Supper called ‘The Grail.’ Through his detailed eye, Nemo crafted an exemplar of one of Da Vinci’s most famous works with captivating features that bespeak a close reflection of the actual painting. And because the sculpture has gained sufficient traction from like-minded individuals, it was then sold with an untold amount, but it continues to sit on a high pedestal for the world to marvel at.

“I wanted to honor the fact that the original rests on a wall in Milano and so the sculptures should mirror [its magnificence] in a similar fashion.” Nemo Intelligere said.

Now, Nemo Intelligere’s ‘The Grail’ currently found its rightful place in a private collection in Connecticut.

While some ordinary painters take it upon themselves to turn the sun into a yellow spot on canvases, brilliant artists like Nemo Intelligere make it their life’s mission to transform a yellow spot into the shining sun. Just like his goal of reminding people of Da Vinci’s marvelous works, Nemo intends to turn some of his paintings into reflective masterpieces so that people can continue to gaze upon the splendor of the late painter. With Nemo’s unquestionable talents in his chosen craft, Da Vinci’s legacy will surely live on.

Evolution of Food Delivery: Addressing the Needs of Modern Consumers