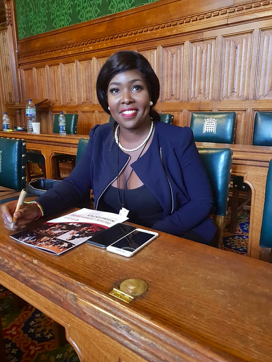 Sandy Idigbe is an inspiring campaigner and a champion of equality in the workplace. As part of a generation engaging around good causes, Sandy understands that it is not enough to simply have good intention, but to actively campaign and create conversations about equality issues effecting young people.

Shoutout UK recently invited Sandy to speak at their Women In Politics Event held at the Houses of Parliament. Representing the voice of the next generation and raising the issue of ethnic women in politics, Sandy continues to campaign on behalf of young people.

Each year International Women’s Day (IWD) highlights the social, economic, cultural and political achievements of women across the world. This year’s celebration specifically calls for an acceleration of gender equality.

With this in mind, YouGov asked Brits whether they think equality has been achieved or whether further progress is needed in eight different areas, ranging from workplace representation to equal household responsibilities.

Across all fields, a majority think that more needs to be done; the largest figure was the 71% who feel that there’s still some way to go in achieving equal gender pay in Britain.

According to Sandy Idigbe, despite some rather challenging findings, the picture is not all bleak. Awareness of inequality has increased over the past three years, so too has the range of material proposing constructive ways to promote equality.

“We hope this latest report is a tool towards an even greater concerted effort to address gender equality in UK History. If ever there was a moment when real, transformational change is possible, this has to be it. Everyone can help and everyone will benefit.” comments Sandy Idigbe.