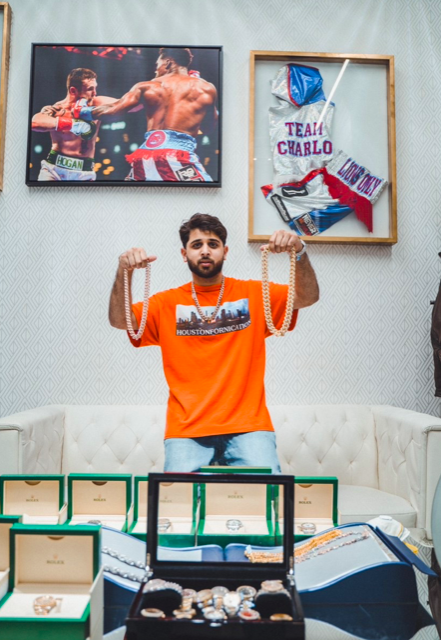 As a skilled jeweler and Instagram star, Frost is taking over the industry from all angles

With such a high demand worldwide each year, there is no doubt that the jewelry industry is a fiercely competitive space to earn a living. To become a jeweler, let alone a prestigious one, an individual typically has some form of existing connection to get started in their career. This prior connection could be a family business, an inheritance of wealth to fund a store and fill it with products, an internship, etc. Few understand the difficulty of establishing a career in the jewelry scene more than up-and-coming jeweler Leo Frost. Frost is a self-made entrepreneur who in just a single year rose from amateur to elite status as a jeweler.

Leo Frost is no stranger to adversity. Growing up in a low-income household, his family often struggled. The pressure of watching his family constantly stress over finances took an emotional toll on him over time, as he felt personally obligated to change their reality. Frost worked hard in school and was a very bright student despite his hardships. In his younger years, he believed that achieving success in the classroom would one day pay off for him and his family. Although this is true for many, Frost found himself taking the path less traveled.

At this point one might ask, how did Frost end up in the jewelry business? Frost recalls the moment he first became fascinated by the world of jewelry. It was not just the captivating way various pieces looked and sparkled in the light, but it was the craftsmanship and attention to detail that really caught his attention. Frost also noticed the vast attention one would receive wearing jewelry, especially high-ticket items. Frost knew in his heart and mind that he wanted to be involved in this lucrative industry, but with little money to work with, he had no idea of how to get started. At this point in his life, he was finding success as a student at the University of Houston, excelling both in the classroom and as the president of his fraternity. Slowly, he began researching jewelry trends, techniques, and a plethora of skills required to master the art of jewelry customization. To find time for this, Frost stopped attending his college classes, and after some time, he made the controversial decision to drop out of college altogether. This decision was highly frowned upon by his family and peers, but Frost was determined to make his dream a reality.

It was at this time that Frost built a dream board which he still looks at each morning. This board displays some of his idols including Tom Brady, Lebron James, Mohammad Ali, Floyd Mayweather, Cristiano Ronaldo, Eliannte, and Drake. Frost always believed that if they could make their dreams come true, so could he, as everyone is just a kid from somewhere. With a chip on his shoulder paired with his determined mindset, Frost began to promote himself throughout his community. He frequently recalls his first marketing effort in which he printed over 5,000 flyers and handed them out around the city. The first few orders came rather slow, but after a few weeks of consistent self-marketing, orders began to pour in. Frost began creating pieces that greatly impressed his clients, and exponentially more people began to take notice. Among those who became aware of this mysterious new jeweler were Iceman Nick and JimmyxBoi, two very prestigious jewelers who today Frost considers to be his mentors. With business going well, Frost soon created his jewelry company, Frost & Co.

Leo Frost’s life has drastically changed in the last year. Not only is he well respected by many prominent people worldwide, he is only just getting started. He has become a star on social media as one of the most popular jewelers, and in just the last year, Frost has sold over one-million dollars in jewelry to a variety of clients. Some of Frost’s clientele includes famous rappers, NFL players, NBA players, and even actors. Frost is known for his relatable personality, trustworthiness, and his ability to easily get along with anyone. Many of his clients have even become his close friends. Frost has also had the opportunity to fly around the world for work. He has been able to visit over 60 cities across the globe, a few of his favorites being Paris and Berlin.

In a single year, Frost has accomplished what most would deem impossible. One can only wonder what he will do with a few more years under his belt. He currently is working on some of his biggest plans yet, including opening his own jewelry store in the near future.  He also has the objectives of buying his parents a house, his Dad a Ferrari, and to own a box suite at the Rockets Stadium. Frost is determined to share his success with his family while also living the life he has always dreamed of, and he does not plan to slow down any time soon. He is certainly an entrepreneur to look out for in 2020, as well as many years to come. The sky is the limit for Leo Frost, and one thing remains certain- “It costs to Frost.”

Through perseverance and an attitude of never giving up, Dallion King aka Mr Moves has proved his mettle not just as a basketball player, but also as a businessman