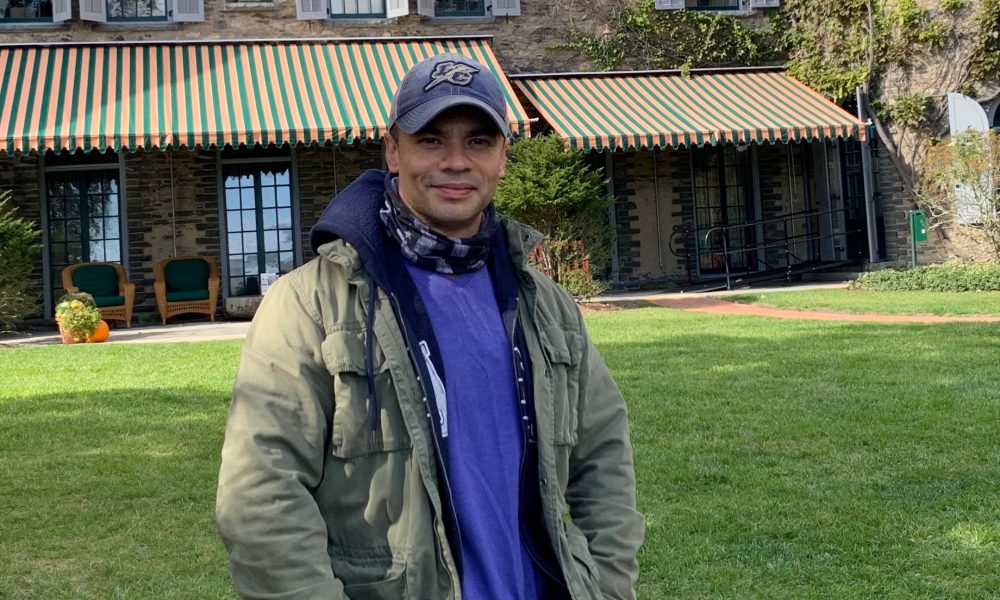 JL Caban was born in the year of Elton John’s ‘Rocket Man’ and true to the iconic song, he has always found himself reaching for the stars – And it has paid off becoming a bestselling author with his first book’ Moving On’.  Recently this literary powerhouse has released his new book ‘Butterflies in Production; Five Short Stories’ which is also destined for the bestseller list.

In this novel Caban pulls characters from ‘Moving On’, the coming of age story of a young man who is attempting to escape a world of drugs and alcohol. With ‘Butterflies in Production’ he now draws attention to some of the moral and social issues in which these new characters are dealing, including biracial relationships; growing up in an inner city, having no choice but to deal in narcotics to put food on the table; being raised in an abusive home; and finally, the stresses faced by women in a male dominated occupation.

Caban takes you on a wild trip into their convoluted worlds, where you get to see firsthand how these protagonists struggle to find their way through the darkness, in search of the proverbial light at the end of the tunnel. If you want to see how this turns out, and you know you do, get a copy of ‘Butterflies in Production; Five Short Stories’ but in the meantime we were lucky enough to score an interview with Caban, so we could learn more about his work and what’s next for this brilliant writer.

Your newest book, ‘Butterflies in Production,’ is an amazing read, what was your inspiration for this rather epic book?

When I wrote ‘Butterflies in Production,’ I knew that I wanted to create a spin-off of my first book, ‘Moving On,’ using some of those same characters to bring to light certain social and moral issues that we face in our society, whilst simultaneously telling their individual stories. Once I settled on that idea, it was a matter of searching deep within myself, getting in touch with the most intimate aspects of my life – the things that I’ve experienced… the things that I’ve seen – and incorporate these feelings to my protagonists. The actual title itself was inspired by my late father’s accomplishments in the music industry. My dad, Joe Caban, passed away from Covid this past winter and I wanted to memorialize him by taking both his 1970s Latin nightclub, ‘La Mariposa,’ (which is Spanish for ‘butterfly), and his 1980s production company, ‘In Production,’ (a production company that showcased people’s talents of all kinds on stage)… hence, ‘Butterflies in Production!’ I would be remiss if I also didn’t mention what inspires me AS I actually write; and that are my two muses, Lauren Mia and Elif. Much like the Greek muse of yore, Erato, these two serve as my inspiration with their beautiful melodies. Lauren Mia, whom I recently had the pleasure of chatting with, left me with the most amazing postulation, “… we are empaths, we are artists, we are lovers, and we feel… a lot. We are the light-workers of the world, and the world needs us.” I thought that was such a beautiful thought, and it keeps me going when I want to throw my laptop across the room.

When you did the final read-through for ‘Butterflies in Production,’ what was your favorite part and why?

(Chuckles) That’s kind of like asking a parent to choose his favorite child! I don’t have a particular favorite. I think each story has its own particular treasure for me; every character has a special place in my heart.

As a bestselling author who creates extremely compelling characters, what would you say is one of your keys to creating characters that engage readers throughout a book?

I like to make my characters as relatable to the reader as I possibly can. These are people that you already know in your daily life; just average, every day, guys and girls who you know at work, or friends you’ve had for years, or whatever. The problems they undergo are the same as anyone else on any given day… the situations are as real – for the most part – as the next person’s. A really good book, in my personal opinion, is one that, as you’re reading, you say to yourself, “Damn, I get that! I can completely relate!” At least, that is my hope.

Your books are wildly popular and you have a lot of fans. What was the most interesting feedback or question you have received from a reader?

Everyone wants to know if the stories are real; they want to know if I’m the actual protagonist, and you can’t convince them otherwise… believe me, I’ve tried! (Laughs) Listen, I’ve said this over and over: OF COURSE there is an element of reality and truth to any story that’s written by just about any author; what I see and experience on a daily basis has the potential to reach my writer’s notebook on any given day… I could be sitting at a local pub and overhear a conversation that could also become the subject of my stories; but am I the protagonist of all my vignettes? No! I suppose it’s similar to when an actor of a movie or TV show is seen on the streets, and the fans think that he’s the character, not the regular person who is just going out for a cup of plain ol’ coffee or a bacon cheeseburger.

It might be a little soon to answer this question, but I am sure your fans are wondering; so, I have to ask – do you have another book in the works you can tell us about?

I do, actually. I’m currently working – slowly, but surely – on another book which will feature a few short stories, a play or two, and a poem, entitled, ‘It All Happens Below Heaven.’ Much like ‘Butterflies in Production,’ it will include a collection of vignettes, however, it will not have any connection to the Christianson family (the protagonists of the first two publications); instead, the reader will meet – for the most part – all new characters. I say, “for the most part” because, in ‘Butterflies,’ story 5, I actually introduce a new set of characters outside of the Christianson Universe (Jasper and Greta); these two will make an appearance in my upcoming work.

Do you feel that your new novel, ‘Butterflies in Production,’ is a fireside read after a day of skiing or is it an after-dinner succulent to read over some scotch?

I’d say, why choose? If you happen to be curling up in front of a crackling fire, after a day of taking on the slippery slopes of a snowy mountain, get yourself a juicy steak (or salad if you’re vegan), head over to the bar, order your favorite libation (peanut butter whiskey for me), and read a few chapters of ‘Butterflies in Production!’

Please use my website to connect to Amazon. On this site, you can either purchase the traditional paperback/eBook version or you can actually own a digital copy by purchasing the NFT at http://booknft.booknft.co/main