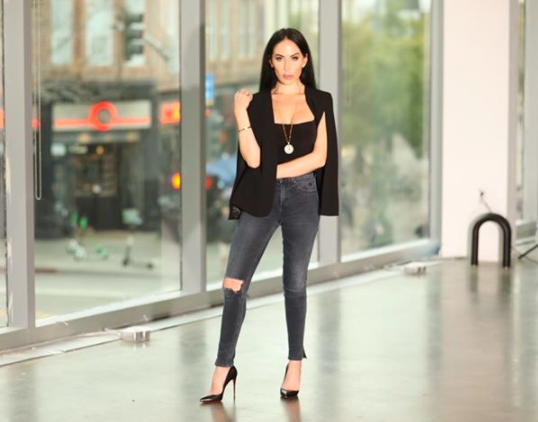 Courtney Yeager  is no stranger to the entrepreneurial fitness world, after her success creating Barresocks, she’s back with her latest discovery! The Tox, a technique involving the lymphatic system that is “a blend of different massage modalities, set out to detoxify your body from the inside out.” She saw that this system is very underrated, and decided with the proper research she could make an impactful change. Learn how you can detoxify your body and back into optimal health!

“There was a major need in the market for a go-to lymphatic health destination. It is highly underrated and under studied. It’s my duty to bring lymphatic health awareness to the masses.” Courtney explained.

Courtney’s story doesn’t begin with The Tox, though. The young pioneer cut her teeth on the Jersey Shore, opening a clothing store and taking advantage of the incredible Summer tourism and lack of present competition. Although her initial venture into self-owned business went surprisingly well, she soon became immersed in the oft-cutthroat system of running a franchise. With the money she made from opening her chic boutique, as well as some significant funds that her parents had saved for the wedding she and her husband decided to pass up on, Courtney signed a five year lease in mid-Los Angeles to run a fitness studio as a franchisee. Though she recounts this endeavor as an ultimately successful one, she also recalls that her big start was never truly easy. However, innovation is born from adversity, and Courtney began to show her natural talent of extracting success from a solid block of negativity.

“Mindset is everything, not only in business but in life. We are solely responsible for our failures and successes and you have to truly believe you are capable of ANYTHING to accomplish everything.” Courtney philosophized.

While running her fitness studio, Courtney noticed that the sticky socks that so many clients were wearing failed to take advantage of an obvious opportunity, at least in her naturally marketing-driven mind. Courtney created a sock brand that replaced the cold and lifeless brand-name-on-the-bottom trope with a product featuring fun and witty phrases. Her innovative tweak led to the creation of Barresocks, and a resulting million-dollar inaugural year of business.

The next chapter of Courtney’s business life, by her own admission, is an emotional one. She summarizes it thusly: “In my early business journey, I struggled with being treated equally by large companies’ male CEOS. I am happy to see that change in our society. When I started the TOX my biggest challenge was being bullied by other women in the industry. It’s a very sad truth that this still happens, but it is very real and the power of social media isn’t always a great one.”

Not one to allow rough patches and naysayers to halt her progress, Courtney powered on with the creation of her soon-to-be empire, the Tox. Once again seeing a need in the world and seeking to fill it, Courtney developed a technique that utilizes knowledge of proven beneficial biological processes to produce the highly sought-after results of detoxification and a slimmer appearance.

“The lymphatic system is very underrated in the US,” she explains. “It is part of our immune system and plays a major role in optimal health. I set out to create a massage technique that detoxifies your body while ridding your body of excess water retention. After much research and study, I found my technique not only detoxified your body, but had a major long lasting aesthetic result, leaving you slimmer in a one hour session.”

The health conscious crowd of the modern era is always looking for a quick detox regimen and a way to shed that pesky belly fat. With a keen eye for voids that need filling and the natural brains needed to build upon common but lackluster practices, Courtney created the Tox and took her big idea to the heart of major cities. Her proprietary technique is currently drumming up massive business at locations in Los Angeles, Miami, and New York City. However, the talented Tox touter is not satisfied with this already impressive level of exposure.

“The Tox has major expansion plans, expanding to ten additional cities by 2021. We also have a lymphatic health product line launching in the next two months.”

The bottom line is this: Courtney Yeager was born to be a titan of an industry. The only variable left up to chance is which sector she would dominate. The road she took to get where she is today was not paved with gold and lined with refreshments. It is from every pothole and slimy banana peel that tripped her up along the way that she cultivated the unbreakable mindset of success among failure that she uses to inspire entrepreneurs of all backgrounds to this day.

“In business, there is nothing that scares me. I feel that to be successful you have to truly go into every situation with an open mind and take chances.” Courtney mused. “Every mistake comes with a lesson and you have to be willing to take the chance and learn from experiences.”