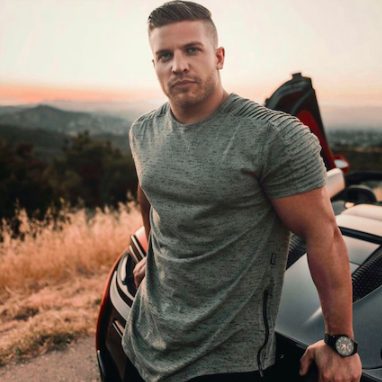 Bodybuilder and social media star Mike Bartholomew is no stranger to struggle. Growing up in a crime-ridden area of Fontina, California, Mike learned early on what it meant to work hard for your next meal. Mike’s struggle paid off, however, and he now maintains a controlling presence on social media with over 175 thousand Instagram followers. Through daily posts of his life and inspirational calls to action, the muscled Mike looks forward to growing his influence and leading others to do the same. With more business ventures on the way and multiple revenue streams, there is no telling how far this star will rise.

“I’ve never been the type of person to just cruise through life in mediocrity,” shares Mike. “Any industry I touch I become addicted to and I am instinctually forced to crush it. I knew that I was meant to be a leader, and to not only find a way for myself to leave my 9-to-5, but also to help others leave theirs as well. I wanted a way to be able to influence people from around the world, while helping them make money and build their influence as well.”

Mike’s two hometown environments played a major role in the shaping of his aspirations. Born in a low-income area of Fontina, CA, Mike was surrounded by crime and criminals throughout his youth. Discouraged at the bleak reality of their hostile surroundings, Mike’s family soon moved on to the more quiet and distant setting of Coeur D’ Alene, Idaho. Yet the humble, contenting, and lackluster lifestyle Mike was introduced to did not jive with his go-getter mindset. He looked around and saw the exact opposite of what he had escaped, and the other end of the spectrum was just as meaningless to him.

“I have seen the worst of both worlds,” Mike explains. “One city will make a career criminal out of you and the other city will keep you very modest with no future career goals because of comfort. I was unique because I knew that settling for less wasn’t an option for me. I had the mindset of knowing that I don’t have to be a product of my environment, and that I can create wealth from anywhere in the world, right at my finger tips.”

Mike talks the talk, but he also walks the walk. By his own account, he is on track to have seven streams of income and to become a millionaire by the age of 30. The self-proclaimed “serial entrepreneur” has got it all figured out and if his dedication to his own physical fitness is any indication, he will stop at nothing until he is miles above the competition. Mike explains his obsession with finding the most efficient and effective method of accomplishing what he sets out to do, specifically in this case mastering the complex beast that is social media:

“I’m a research guy. Anything that I want to be a part of, I have to know everything about it. The most intriguing thing about social media is that it is almost a taboo to speak about how to grow your social media presence aside from being featured with famous people or getting on television.” Mike goes on to lament the pilfering of time exacted upon him and so many others by those who claim to have devised the key to gaining followers and notoriety: “I tried every method that was preached to me by ‘social media gurus’ and none of it worked. I knew that I wanted to crack the code to help others grow and after years of research and trial and error, I’ve finally discovered methods that work.”

Understandably, Mike does not so easily give up his exact formula for success, only touching on bits and pieces. For one thing, integrity is key. Never overpromising or under-delivering. Surrounding oneself with trustworthy and hardworking people is another crucial aspect he focuses on. Though his proprietary secret of social media mastery is his alone to know, Mike is ready and willing to impart to the world something just as beneficial: the philosophy that has facilitated his accomplishments.

“Mindset can build an empire or shut down a massive corporation. The strongest mindset is knowing that you will never fail if you never quit. Don’t be a tomorrow person; generally tomorrow never comes. Something will always come up, something will always test your patience and beg you to quit. The ones that win are the ones that do all the things that nobody else wants to do.”

Doing what others are afraid to do themselves has not left Mike entirely unscathed. He readily admits that work-life balance is a struggle for him. Though he considers his wife and two children to be the biggest successes in his life, his drive for dominance in his field often competes for priority with his personal life.

“My biggest obstacle that I’m still working on is creating balance. Everyone sees success differently, but my success is knowing that everyone I love is taken care of completely. Substituting my workload for my children and spouse and learning to balance those aspects are the toughest thing any entrepreneur has to deal with.” Despite these struggles, Mike has set his sights on utilizing his business savvy to enjoy the best of both worlds in the near future: “My next project will be to create additional hands-free sources of income so that I can focus on other important aspects of my life.”

To find out more about Mike Bartholomew and his road to social media success, join his more than 175 thousand followers on Instagram.

An Inside Look at Franchise Agreements