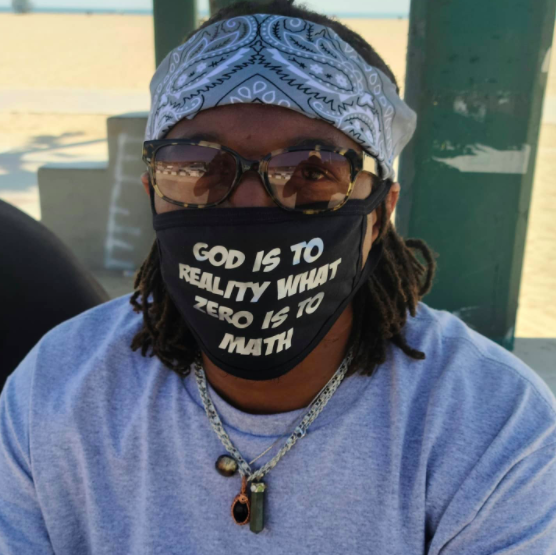 Hassan Bfly is a self-taught, non-prophetic messenger of God. He is the author of the book Theology for the New Millennium: The Introduction of Intellectual Righteousness. In it, he relays the message of his philosophy, intellectual righteousness, where he proves God is real. His approach to proving God is real is different from what is typically expected. Hassan Bfly uses common sense and mathematics to prove the existence of God.

He made his initial breakthrough in 1995 and managed to get his book published in its current form in 2017. Born and raised in Washington, D.C., he moved to Los Angeles in February of this year. With Venice Beach as his new home, Hassan Bfly promotes his philosophy and sells books on the boardwalk.

His book can be read and experienced through various forms of media. There is an audio ebook, which allows his audience to read along as they listen to Hassan himself deliver the message as the speech that it was written to be. His book is said to be the scripture of our time, and he preaches his very own intellectual righteousness, which is the thinking man’s religion.

Intellectual righteousness is based on two facts and one opinion. Those two facts are: “God is to reality what zero is to math,” and with God is Heaven or Hell. The one opinion is that “you should remember those two facts” because it will greatly improve your life.

People may easily dismiss the first two statements as someone’s personal opinion since they provide a different perspective on things and there is no way to refute them. That is because it is easier to ignore truths that one isn’t ready to accept than to admit that one must be wrong in order to be right, especially when it comes to a subject as sensitive as what to believe about God.

Facts are accepted as true because they can be proven. Since no other belief, doctrine, or ideology that deals with God asserts any facts, intellectual righteousness is unique in that it takes on the burden of proof. It doesn’t use people’s inability to witness God physically to ascertain that there is no creator at all. It also doesn’t make claims that insult anyone’s intelligence. Both facts can be validated through good old-fashioned common sense and basic mathematics. It would be a shame to say otherwise.

It doesn’t take a genius to understand intellectual righteousness. It might use the scientific method and logic to back up any and all of its claims, and it might use a few big words from time to time, but all one really needs is an open mind in order to fully understand it. One must give honest and objective scrutiny to ideas in order to find the truth. As long as one can trust their own judgment and their own ability to understand things, the truth can be made clear.

The ultimate goal of intellectual righteousness is to eliminate perception and imagination from the theological discussion while revealing the potential power of a positive perspective through applying absolute value to all that can be witnessed or experienced. Once someone gets over the shock of losing the imaginary and super-powered best friend or arch-villain, one will realize that Heaven comes from within, and the formula to continuously attain it will be made clear.

To know more about Hassan Bfly and to delve deeper into intellectual righteousness, visit his official website.

Meet Luca Boschi, the Light Architect who is Becoming a Sensation Because of his Unique Photography Style

Michel Dahyana Identity Theft Issues & How She Is Preventing Them