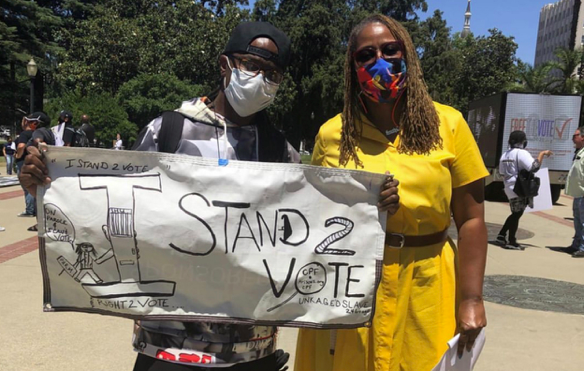 Ex-prisoner who co-wrote while incarcerated, the 2019 play I Stand2 Vote, about restoring the voting rights to ex-prisoners, finds a kindred spirit in a progressive senator Holly J. Mitchell.

Holly J. Mitchell was born and raised in Metropolitan Los Angeles. A graduate of UC Riverside, later she would work as a policy analyst for California Senator Diane Watson. In 2010, she was elected to the state Assembly, and moved to the Senate in 2013. She is currently serving her final term and running for a seat on the Los Angeles County Board of Supervisors. During her time in the state senate, Sen. Mitchell proposed a set of criminal justice reform bills that were signed into law. They included sentence enhancement reductions for low-level drugs, removing court fees for the innocent, sealing arrest records for people not convicted of a crime, ending the sentencing of juveniles to life without parole, and many others.

One bill she authored, SB 1157, would have prohibited California jails from eliminating in-person visitation rights when they adopt video visitation technology. Her bill would have prevented jails from replacing in-person visits with video visitations. It was her attempt to preemptively stave off another criminal justice profiteering scheme. Families with members in jails would have to pay for video calls from home, or travel to the jail to video call their incarcerated family member. In the case of the latter, both the visitor and the incarcerated person are in the same building, but instead of having a real visit, they could only see each other through a video screen. This bill was vetoed by Governor Jerry Brown.

In the mid-1990s, Oakland native Pyeface, as he was known, had a promising career as a rapper. Instead of continuing to pick up a pen to earn a living, he decided to pick up a pistol. This would cost him his freedom for the next 24 years. He spent six years in the federal system, and 18 years in California’s maximum security prisons. While doing time in California, Pyeface, now known as Minister King X, found his outspokenness on prison conditions and racial unity to be problematic. King taught law and preached peace. At the start of the Millennium, this type of thinking was the antithesis to the mindset of prison authorities. This was before the California Department of Corrections, CDC, would have its now R, an acronym for rehabilitation, CDCR. At this time, the CDC was housing nearly 175,000 prisoners; more than 200% above the Department’s design capacity to safely house prisoners. If prisoners became united and educated themselves on their legal rights, especially on issues of prison conditions, one could see how prison administrators may not see this paragon as providing them with a safe work environment. During this time, King created K.A.G.E., Kings and Queens Against Genocidal Environments. Through this platform, King brought in other prisoners to start thinking, writing, and using their voice in the cause of the elimination of violence. King was a participant in all the California prisoner hunger strikes to end long-term solitary confinement. When they first began, he was seen as an outlier, as he was a general population prisoner, unaffected by this issue. King, always active with using his voice intellectually and artistically, found a home in the late 2010s, when California had reduced its prison population, no longer in fiscal crises, and had prison administrators committed emotionally and financially to rehabilitation. Working with the No Joke Theater troupe, King and other prisoners created powerful works of theater art. No Joke’s Director Leah Joki is a Juilliard trained actress with over thirty years of training prisoners in all aspects of Theater.

In July of 2019, King was released from prison. He hit the ground running, becoming a part of the staff at the Oakland chapter of All of Us or None. AOUON is a grassroots organization dedicated to providing legal services to prisoners with children. Less than two weeks after his release, he participated in the fundraiser, TRUTH BE TOLD: The Dark Side of Gentrification. King, who is now Co-Director of the California Prison Focus, formerly known as the  Pelican Bay Information Project, in December of 2019, created the first annual Ratcliff Awards. A Ratcliff Award is named in honor of Willie and Mary Ratcliff. The Ratcliffs are the owners of the San Francisco Bay View, one of the most influential African American newspapers in the United States. The award honors members in the Arts and Culture community, who have been active in using their talent to bring about awareness to issues of social injustice. This December will be its second award ceremony.

In 2016, California prisoner and Los Angeles native Donald “C-Note” Hooker wrote to Senator Mitchell and to former US Secretary of Labor under Obama and Los Angeles County Board of Supervisor Hilda Solis, and invited them to an encore presentation of the play Redemption in Our State of Blues. Redemption was a part of the CDCR’s first wave of funding for the program Arts-in-Corrections. Both Supervisor Solis and Senator Mitchell sent representatives to see the play at the California State Prison Los Angeles County on their Facility B Yard in Lancaster. While the play was emotionally stirring for all in attendance, Senator Mitchell’s representatives were especially moved by the semi-autobiographical stories, and rendered a very passionate postplay speech. The success of Redemption led to “BREAK IT TO MAKE IT (BITMI): Busting Barriers for the Incarcerated Project, Los Angeles, California.” A first, for prison reentry programs in the United States. It provides two years of free housing from the Los Angeles Mission. Two years of free education from the Los Angeles City College, and participation in the jails to jobs program of actual paid theatrical work with The Strindberg Laboratory.

In the winter of 2018, King and C-Note co-wrote the play I Stand2 Vote. I Stand2 Vote is set on the floor of the California Assembly where opposing parties argue the merits of returning the voting franchise to ex-prisoners. The exchanges and various camps in the audience do get on the verge of incivility, but the behavior is quickly clamped down by members of their own party. What makes Vote so percipient for our times, there was no near rioting to prevent an opposing view to be heard, the go to choice of so many on our UC campuses. No one suffered from being cancelled as is so prevalent in our age of Cancel Culture. Maybe because the play was set in the state’s Assembly floor that these other results did not occur?

“Look, in prison you do not get to cancel someone. The occupants in the cell next door could be tattooed with Swastikas,” says C-Note, “and as an African American, I clearly don’t subscribe to that ideology, but there is a humanity in me, and there is a humanity in them. Enclaves, be it physically or digitally, are barriers to this sort of realization. This is why when you don’t have police who live in the neighborhoods they patrol, we get the results we get. There are exceptions to everything, but if a Black prisoner is housed long-term next door to a White prisoner, just like a Black family who lives long-term next door to a White family, this otherness starts to break down. I know my statement may seem controversial to the ‘walled-off closed minded,’  but you don’t get to wall yourself off in prison,” says C-Note.

King concurs. “One of my priorities since coming home is to secure the release of the principal thinkers of the Pelican Bay SHU Short Corridor Collective. In 2012, these thinkers were the signatories to the Agreement to End All Hostilities. The AEAH began on October 10, 2012. It officially ceased all hostilities between racial groups in SHU, Ad-Seg, General Population, and County Jails. If any personal issues were to arise between individuals, people needed to do all they could to exhaust all diplomatic means to settle such disputes; and not allow personal, individual issues to escalate into racial group issues. It is the most significant racial and gang truce in the history of California. It is on par to the 1998 Northern Ireland Good Friday Peace Accords. You can look different, you can think different, but you don’t have to kill one another,” says King.

In 2019, I Stand2 Vote was performed at the first annual Ratcliff Awards. In the spring of 2020, DistroKid released for music distribution, King’s catchy Hip Hop Rap, Voting Anthem, I Stand 2 Vote. I Stand2 Vote is a lesson on how to disagree without being disagreeable. It is the kind of play that would make that other former prisoner-playwright, Alice Marie Johnson proud.

To learn more of the works between King and C-Note, visit https://www.c-note.org

How Prop 19 Could Affect Estate Planning