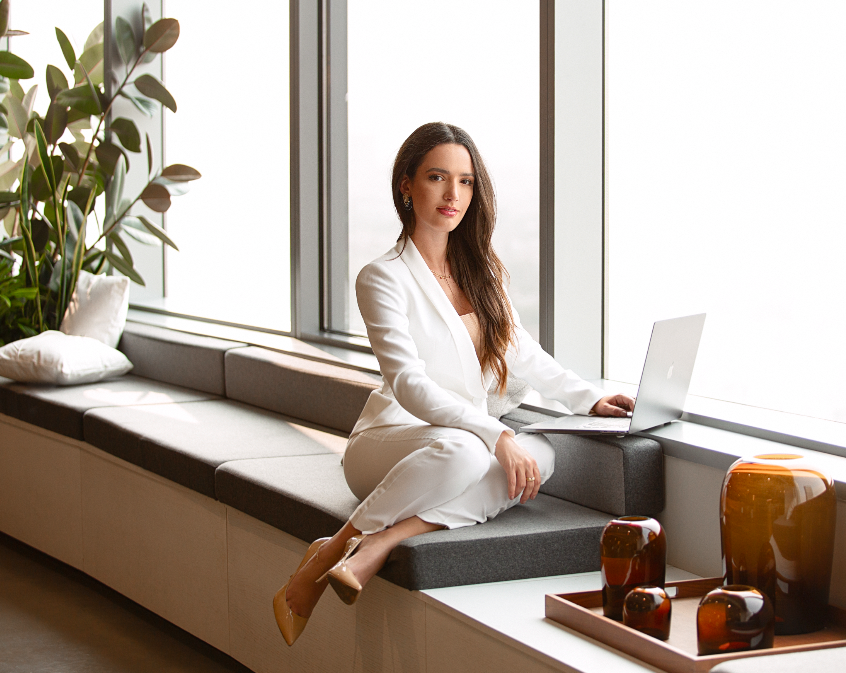 Venezuelan born young entrepreneur, Pierina Merino, launched FlickPlay, a first of its kind 3D social media app — available now in the Apple Store — in the US back in July. And the widely popular interactive social craze is scheduled to be released in six key cities in Spain at the first trimester of 2021. ‘Exactly, what is a 3D social media app?’ Let’s take a deeper dive into this groundbreaking technology and the woman who developed it.

Born in Ciudad Bolivar, south of Venezuela, Merino left for Canada at age 16 to study English and urbanism; however, she landed in Miami. Merino completed her studies with a degree from the Southern California Institute of Architecture. At SCI-ARC, the renowned Canadian architect Frank Gehry recruited Merino, and she joined his studio as its youngest architect at age 21.

Possessing a strong attraction to design integrated with technology, Merino embarked on her first start-up at age 26, bootstrapping PIEMER — original jewelry designs created with 3D printing technology. The brand had phenomenal success at Nordstrom and was nominated for the Fashion Rising Brand Award by the Los Angeles Business Journal in November of 2017. Merino also received an invitation to exhibit her brand in the Los Angeles Architecture and Design Museum.

Working as an architect, Merino was a comprehensive designer who used traditional architectural methodologies; however, her creations also relied heavily on the technical aspects of design. The result of melding these two elements led to unique and innovative physical spaces. Merino collaborated with colleagues on numerous megaprojects, including the creatively inventive design of the Facebook Headquarters in San Francisco, Menlo Park, and the Facebook Marketing Offices on Park Avenue in New York City.

With her newest venture, Merino heads into the uncharted territory of 3D social media platforms, where she is bridging the gap between the physical and digital worlds. Merino’s app eventually attracted investors from major digital venues such as Twitter, Spotify, and Live Nation, just to name a few.

Merino says a lot of leg-work went into receiving those endorsements. “I made a lot of pitches and can barely remember how many industry events I’ve attended to introduce myself and to try to raise funds.” She received her first check from Muse Capital and then received a few more.

The start of something big

FlickPlay was preceded by Merino’s idea called the Experiential Capsule, where people could travel throughout the United States and customize their interactions per location. Fascinated with the concept, Merino began working on the initial stages of the project. In one month, she developed the first screens of the app without assistance from her technical co-founder. Merino was determined to move the project forward, commenting, “I want to hear users say…’You know, I’ve never played anything like this before.’”

A short backstory on the history of social media can illustrate just how much the industry has evolved. Social media’s concept of sharing life’s moments became popular with Twitter and Facebook — part of the 1D era of social media using text and images. Instagram and Snapchat belong to the 2D period, utilizing pictures and videos. FlickPlay is now creating a whole new experience in social media sharing as the first social platform with game mechanics, immersive content, and video gaming tools.

FlickPlay is a social media experience that allows users to generate interactive videos while immersed in a location. The app’s camera allows users to interact with the world and share content, and the experiences are inspired by pop culture moments, themes, and places. The FlickPlay app is the first digital platform that enables users to get into a content game in the city. And users get hooked because the game offers two alluring elements.

First, users have goals, get rewards, and keep score with co-users. This interaction is attractive to most people because it fires-up their competitive spirit. Second, the game has brand interaction in suitable locations and highly creative content that drives users to share it. Merino clarifies that FlickPlay utilizes the same concepts and technology like Pokemon Go, TikTok, and Snapchat combined on one social platform This platform is marked by evolution ready to create the next revolution of social storytelling

What’s next for Pierina Merino? With her app available in the US and the map game in process, FlickPlay launches in Spain at the first trimester of 2021. Merino sees this event as a gateway to more European locations and plans to dedicate her time to promoting her one-of-a-kind 3D social media marvel.

Technology and Innovation can Play a Massive Role to Predict, Detect and Prevent Wildfires: Sonia Randhawa