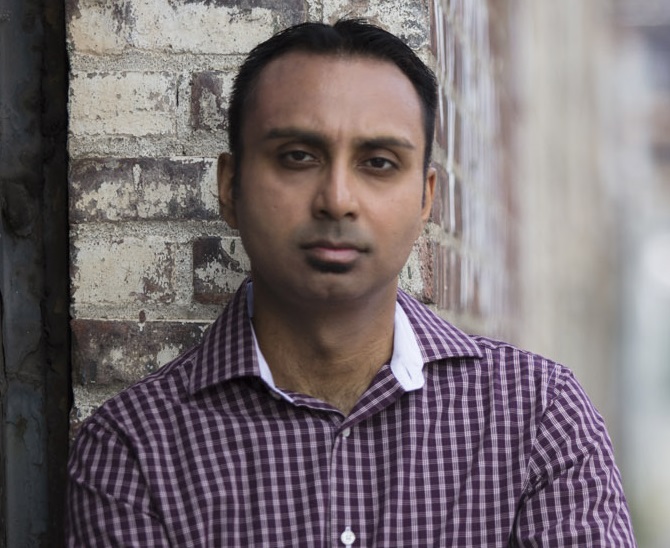 Reading is a great way to escape everyday life, and Tejas Desai’s novel The Brotherhood offers readers a rather epic escape, so much so it recently hit the bestseller list on Amazon. Desai is a wunderkind when it comes to crafting compelling characters that take you down a rabbit hole of betrayal, greed and hypocrisy. In crafting Niral Solanke, the novels main character, a Indian-American detective with a  Hindu background Desai drew upon his own background giving readers an insight into a culture they may not have delved into before. This aspect and the sheer number of thrills and chills in this book will have readers enthralled, and no doubt reaching for The Run and Hide, the second book in his series. Recently we sat down with Desai to learn more about him and his work, and it was a rather amazing talk.

Your book is rather powerful in that your main character is an Indian American detective. Where did the inspiration for this character come from?

My own Indian-American and Hindu background, experiences and observations, both my own and those of others, formed the basis for the main character Niral Solanke, and my imagination created the rest. Since my familial background is Hindu, Indian, immigrant and working class/police-based (my father is a traffic cop), I was able to use that as a solid background for the imagined world and story, and I also did a lot of research into contemporary private investigators, hedge funds, visual artists, The Great Recession and a number of other plot elements and settings.

My main motivation was to write an Indian-American literary thriller that worked as both a commercial mystery thriller and an investigation of identity in a multicultural society. Asian-American noir had a big influence on me, particularly Chang Rae-Lee’s Native Speaker and Suki Kim’s The Interpreter, but those books are primarily Korean-American. Other major Asian-American authors like Ed Lin and Henry Chang are Chinese-American. Where was the Indian-American angle? So I wanted to introduce and explore that.

Since Hinduism has a major philosophical and moral component, of course the main character Niral would struggle with that and his place in society, and the other characters would try to influence him into their way of life. The balance between high and low, struggles with addiction and exploitation, how to make a living in the modern world, all of these are issues that are explored in The Brotherhood Chronicle because they are contemporary issues that most people have to struggle with.

What are you doing these days to unwind when you are not writing?

I have a great core of friends who I hang out with. I also have a wonderful extended family. I travel frequently, usually alone so I have the freedom to explore, meet new people and also gain material for my fiction. I also go on the (very) occasional date, but considering I’ve been single for a decade, I’m not sure I’m very good at that!

What was an experience you had when you discovered the power of words/language?

When I was in high school, at Bronx Science, I was having a tough time socially and trying to find myself—philosophically, morally, and otherwise, plus I was experiencing and observing some tough things. I ended up writing a powerfully violent novella which no one but a few have ever read, and a series of five poems, which varied from the disturbing to the romantic.

While I put the novella in my drawer, I submitted the poems to the Bronx Science magazine Dynamo, and to my surprise, despite knowing no one on staff, they selected all five for publication, more than anyone else, I think. Later the editor came up to me and told me how much she admired my writing. I was shocked, no one had ever cared! Many of the same poems were published in two different teen anthologies, I think one was for NY State and one national, and later three of the poems won an honorable mention in the Princeton Poetry Contest! I even wrote a physical letter to Paul Muldoon, a famous poet at Princeton I admired, and I remember he wrote back to me!

I gave up poetry writing because I was more interested in narrative, but that experience showed me that language could have power and move people, intellectually and aesthetically, and that my own words could have that power.

If you could meet any author living or dead and get some writing advice, or just shoot the breeze who would it be and why?

Even though my favorite authors, all-time, are Faulkner, Balzac, and Dostoyevsky, I’m not sure I would want to have a conversation with them. I think I’ll choose Ernest Hemingway, who I also admire a lot. Shooting the breeze with him would be pretty fun, the Lost Generation was definitely the most interesting generation of writers even though their work could be uneven. There’s no way I could out-drink him, so I probably wouldn’t try!

Is there anything new happening that you can tell us about? We are sure your fans want to know what’s coming next.

Well, The Dance Towards Death, the third book of The Brotherhood Chronicle, is scheduled to come out in September 2020. I’m working on the final edits, cover design etc., but it should be available on NetGalley soon for reviewers and for pre-order hopefully three months in advance.

The book continues Niral’s adventures abroad and the other character’s storylines from the captivating The Run and Hide. As in the previous books, there are many twists and surprises. Niral’s adventures take him to dark places and he needs to make some tough choices while trying to do the right thing overall.

My other project is the second book of The Human Tragedy series, my panoramic portrait of American society as a series of short story collections. Following the acclaimed Good Americans (2013), the second book is tentatively titled Bad Americans. As in the first book, there’s a frame narrative, followed by a collection of what I’m hoping are 10 stories.

The collections are inspired, in part, by the great Decameron by Giovanni Boccaccio from 1300s Italy, which took place during The Black Death. Similarly, I think the frame narrative will involve a dozen or so Americans who are quarantined in a library due to a virus outbreak and tell stories to each other at night to pass the time. We’ll see how the Coronavirus outbreak evolves in the U. S. that could help with some of the details of the frame narrative.

While I’m planning the framework now, I won’t have time to seriously work on the book until after The Dance Towards Death is released, but then I’ll be all in. It will be difficult to pull off considering both the frame narrative needs to work and the stories need to be representative and diverse enough, but I’ve done it once and I’ll do it again. It’ll be fun and challenging and I hope it will be a great portrait of contemporary America!

For more information on The Brotherhood check out Amazon.

Larry White Discusses his latest Book ‘Confessions of a Zen Narcissist: Struggles with the Illusion of Self’

How To Prepare Kratom Tea – Learn from the Experts