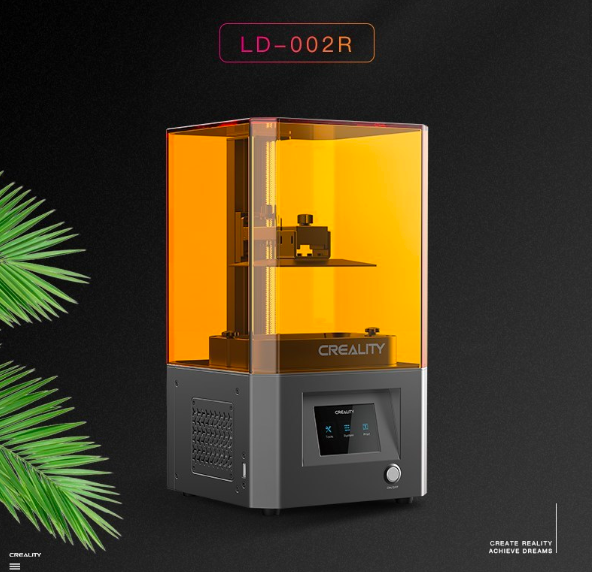 The Chinese company, known for its affordable FDM 3D printers, has already released five photopolymer systems, including two professional ones at a cost of about $10,000. Neither professional nor affordable systems have gained much popularity yet, although budget variants can compete with popular Wanhao D7 and Anycubic Photon. However, Creality has developed and releases an updated version of Creality LD-002 with significant upgrades at a lower price.

The layering in Creality LD-002R is carried out by an LCD-mask with a resolution of 2560×1600 and LED backlights. The system is designed for 3D printing with resins optimized for 405 nm wavelength UV light. The XY axis precision is 75 microns, layer height is 20-60 microns. The printing speed in the vertical plane is 50-70 mm/hour, the illumination of one layer takes 6-18 seconds.

The bed leveling is standard: it features four hex screws, which need to be loosen, then it is necessary lower the platform all the way down, and tighten the screws again. The plate is perforated for better adhesion, although it seems to be an overkill as the build volume is only 120x65x165 mm. The rear part of the build chamber contains a carbon filter.

The Creality LD-002R uses the ChiTu Box slicer and the recommended optional ChiTuBox slicer with 4X/8X anti-aliasing function. The interface features a 3.5 inch touchscreen and a USB port for data transfer.

Want to try and start your own 3D printing business? Check out this industrial dual extrusion 3D printer. Creatbot D600 is a stable and highly durable 3D printer, which will allow you to print anything you want, be it models for sale or decorative things for your home.

If you’re interested in 3D printing, but don’t know where to start, check out this buyer’s guide. It’ll help figure out what machine you need.