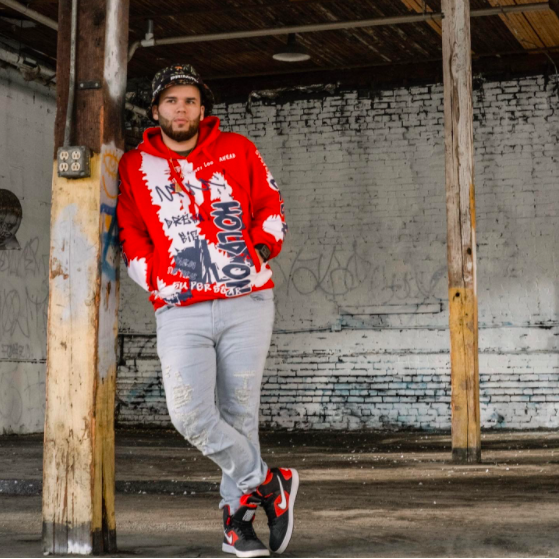 Raw and authentic music can be hard to come by nowadays. In this filter-driven generation, where people feel the need to mask their imperfections, one artist stands out from the crowd by “keeping it real.” That artist is ATEE, a rapper from the eastside of Detroit, Michigan.

What music lovers will notice right away about Aaron Talukder, aka ATEE, is his authentic raps that bear all. He often raps about life in general, taking both the good and the ugly. Aaron first started his journey into the arts at eleven years old, when he began writing poetry. His craft would later evolve into compelling lyrical stories that would gain more awareness in close circles and later even move outside of ATEE’s immediate communities.

After taking all his student loan money and risking it all to buy studio equipment, ATEE started recording music. He was only nineteen years old. Today, he is on his way to becoming a significant force in the rap and hip-hop category. He has written and released a few high-quality tracks that are growing momentum by the day. Some of his tracks include “Glitch,” “At All,” and “Play the Game.” The latter is his latest release, one with a “soft hook from an unknown female voice that takes the listener by surprise with her nostalgic and tenacious voice,” as ATEE would describe. The song also has a music video, which beautifully conveys the song’s message.

ATEE is from the Pacific Northwest area of the country. He was born in Kirkland, Washington, but would later move to Michigan, where he spent most of his life. His life has been tumultuous at best, coming from a broken home. ATEE would also struggle with bullies all his life, which would negatively affect his self-esteem. For a season, the artist would move in and out of jail, facing peers’ betrayal and struggling to get his life in order. Aaron has lost a total of thirty jobs in his life, which also spoke to him about his calling. “I realized I wasn’t meant to work a ‘normal’ job the rest of my life,” shares ATEE. “So I began to dive into music fully.”

One of the artist’s most significant breakthroughs is his reunification with his father. After going on five years without communicating with him, ATEE visited his dad during one of the most challenging times as the father faced a life-threatening condition. Fortunately, ATEE’s father pulled through, and he invited his son to move to Seattle to start over. He took his father’s invitation and moved to a new city.

Today, ATEE is on a journey toward making his name known in more circles across the country. “I am hoping they have a greater understanding of who I am,” the artist shares regarding his goals. “I also hope that more people would notice that I’m trying to spread awareness of being real and honest in anything you do.” More than anything, ATEE pursues music as a way to bring healing to others, using his craft to make people realize that they are not alone in their struggle and someone understands. ATEE hopes to affect positive change through his current and up and coming music.

CBBC star, Archie Lyndhurst’s cause of death confirmed by her mother