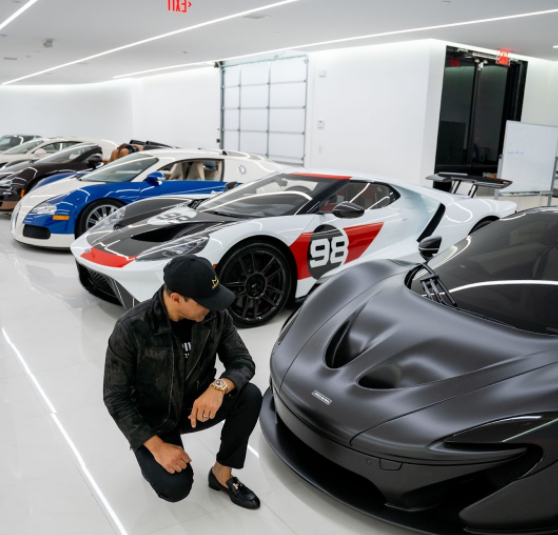 Manny Khoshbin is the true epitome of the American Dream. An immigrant from Iran who fled the war with his family, Manny has been hustling since age 14. Today, he has amassed hundreds of millions from real estate and aims to help others reach the American Dream through his books and intensive mentorship programs.

When Manny Khoshbin moved to Orange County, California, with his family, they struggled to make ends meet. Their family of six lived in a car for months before his father was able to land a job and move them to an apartment. Seeing his family’s hardships, Manny explored ways to help build a more comfortable life for them. And so, at 14, he started selling used goods he would find dumpster diving at a local swap meet. Later on, Manny got a job at Kmart. Although he wasn’t earning that much as a grocery clerk, he saved his earnings to fuel his first business venture.

Moving on from his first employment, Manny Khoshbin sold nuts door-to-door to the local businesses in his community. But just as hastily the business was built, it was also shut down at the same pace when Manny, who was not knowledgeable about health permits and other protocols for opening businesses, had to shut their doors after failing to comply with a local health inspection.

After closing their doors, Manny Khoshbin invested his life savings in buying a gas station only to find out that he had been scammed by the realtor. Back at square one, Manny got back on his feet and worked at Winston’s Tire Shop, where he realized that many luxury car owners share one thing in common–they ventured into real estate. Seeing the immense potential in the industry, he partnered with a real estate broker to build his own mortgage company after working as a loan processor for a short time.

It wasn’t long before Manny Khoshbin was making over $30,000 a month from his real estate venture, which he then used to open a local 79 cent store with a business partner. But after being faced with competition, the store needed serious efforts to keep afloat. Manny rose to the occasion, invested in advertising to boost sales, and eventually lifted the business back up. Soon after, Manny sold the business and used the proceeds to start to scale his success in the stock market during the dot-com boom in 1998.

In 1999, Manny Khoshbin doubled his money from the stock market and bought his first commercial property in Whittier, California. By 2000, he acquired another commercial property in Santa Ana, California, which, after doing some renovations, was sold for $1.6 million two years later, bringing Manny his first million. He continued down the path, and today, Manny has bought and sold over $900 million worth of properties.

Paying his success forward, Manny Khoshbin seeks to provide others with a blueprint on achieving the American dream through his two bestselling books, Contrarian Playbook and Driven.

Furthermore, Manny Khoshin developed three programs to share his knowledge and expertise on real estate which has now helped hundreds of investors start and scale their real estate portfolios. First, Real Estate Ignition provides lifetime access to an online training program teaching Manny’s A to Z investing blueprint and includes a financial starter kit to help people track their expenses and net worth. Second, Commercial Mastermind integrates the principles in Real Estate Ignition including a six-month entry to exclusive group coaching, community access with high-level investors to network and partner on deals, learning how to outsource and scale a team, including weekly coaching calls with the expert himself, and more. The top tier program is called Contrarian Academy, which encompasses total access where Manny provides intensive commercial investing training with a step-by-step Master Action Plan on the A to Z acquisition process, including a hands-on mentorship geared towards boosting individual skills, confidence and peak results.

Besides his real estate portfolio, Manny Khoshbin also owns an impressive collection worth more than $40M of exotic cars. After three decades of ups and downs, Manny proves that anything is possible. Learn more about the real estate mogul on his website.

How NU Media is revolutionizing the digital media space