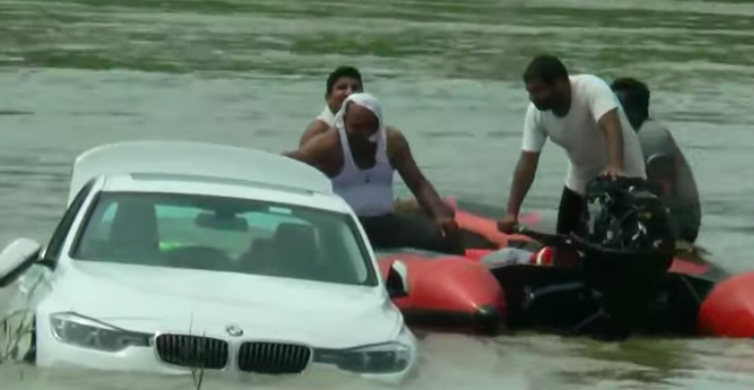 A young boy from Haryana, fond of driving and possessing high end cars, allegedly pushed his new BMW car into the river because he wanted a Jaguar. He got this car as a gift form his parents.

This young driver by the name Akash was very upset when he got to know that his parents got him a BMW in spite of him demanding a Jaguar. He threw the brand new car into the water because he felt that this was “too small” a car for him and his pals.

In a video clip, the car was found sinking beneath the water in Yamunanagar River that flows in the state Haryana which falls in northern India. The police had to literally use a crane to pull the car out. Police have started investigations in this matter.

According to some locals, the boy immediately jumped out of the vehicle just before it reached deeper water. The onlookers then quickly helped him to safety.

One police official informed that – “This youth was very arrogant and he kept insisting that he wants a Jaguar only because he feels BMW is a little small for him and his friends inside.”

According to the officer – “We are doing a preliminary round of investigation and we feel this issue is a private affair of the boy and his family.  We shall proceed according to the law.”

When contacted the father of the lad, he said that – “I wanted to give my son a car as a present on his birthday. Currently we could only afford to buy a BMW for him.  But my son kept on insisting that he should be given a Jaguar explaining that the vehicle BMW was too small for him. We thought that he would be okay with a BMW. But he was not contended with it. We never ever imagined that our son would do anything like this.”

More Men are Now Getting Attracted Toward Spas