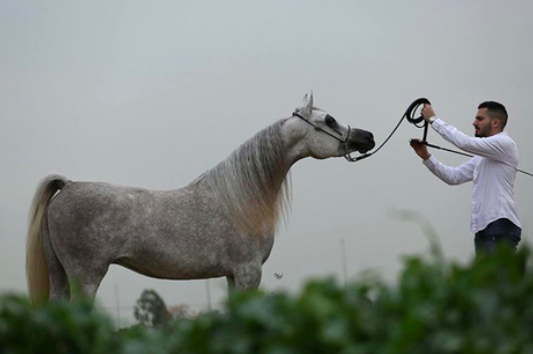 The now world-famous Al Sheikh horse stud was founded in 2016 by the passionate and visionary horse trainer Mohammad Sheikh Suliman. In a few short years, it has gained respect throughout the world and has become a leader in the Arabian horse industry. The stud has carved its own space at the top of the Arabian horse world by winning countless domestic and international championships.

The Al Sheikh horse stud was founded by Suliman, a businessman, investor, and qualified horse trainer. As an investor in start-ups, he has invested over $7million in over 44 companies. Suliman has proved successful in many fields of business and horse training, however, in 2016 Suliman decided to commit his time to Arabian horse breeding at his personal horse stud named “Al Sheikh Stud.”

The Arabian horse stud farm was set up in the Provence region which is also known as the “breeding area” because of its famous air and water quality, the quality and easily available fodder, as well as the ideal climatic conditions necessary for breeding Arabian horses. Suliman is a passionate and visionary breeder and his remarkable breeding programme at Al Sheikh has, in a few short years, received remarkable results, awarding it a top position in the Arabian horse world. Raphael Curti and Uri Shaked make up Al Sheikh’s talented and visionary team at the Al Sheikh stud. They breed mixed bloodlines and own 20 mares, stallions and fillies which are located between Israel and Belgium.

The stud won its first Silver title in 2017 at the World Championship with Seranza and soon achieved the honourable title of World Gold Medal with Equator as Senior Stallion at the Arabian Horse World Championship 2018 in Paris. In the same year, Al Sheikh’s mare Equator won the highest mark in the International Beauty Contest which was held in Paris. Some of the stud’s most recent achievements include the Gold medal in Senior Mares class at the 2019 Israeli Arabian Horse Festival; Bronze Champion at Menton 2019 in the Junior Fillies Champion; and third place at Menton 2019 in the 2 Years Old Fillies.

It has since established its position in the Arabian horse world and has gained international recognition through its successes across Europe and the Middle East. Al Sheikh’s horses have dominated the Arabian horse championships in the years since the stud’s establishment. The stud strives to continue its role as a global equine leader and a leading centre of excellence for Arabian horse breeding. Suliman and his team set the highest standards for Arabian horse breeding and welfare. It is continually expanding its extensive breeding programme to produce more of the world’s most beautiful and successful Arabian horses. The stud aims to continue its remarkable worldwide success and it aims to win gold every year.

Al Sheikh’s passionate team and its visionary breeding programme will no doubt continue to win international success in the Arabian horse world for years to come.

What to Watch out for when Living in Small Groups, if you plan to do this as a way of Living with the Worldwide Spread of Coronavirus: The Story of Biosphere-II by Dr. Daniel B. Botkin

Conditions of Applying for NICOP through NADRA