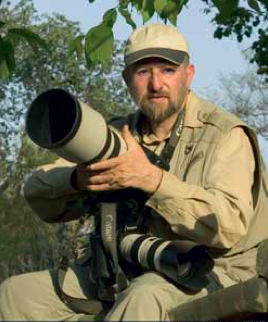 Within the sphere of wildlife photography, 56-year-old Steve Bloom has few peers. After five best-selling and critically acclaimed books and an international series of exhibitions, much of his work has become instantly recognisable. But how did he get to where he is now? We caught up with Steve to ask him.

Born and raised in South Africa, Steve’s first ‘proper’ camera was a Canon FTB he bought while in his twenties during the 1970s. Although he didn’t have the opportunity to study photography formally, he used this to teach himself the basics by photographing the divided society around him.

In 1977 Steve moved to Britain where he took up work with a printing company before jointly setting up his own photo-retouching studio a few years later. ‘Our studio was one of the first to embrace computer technology; however, my own photography took a back seat. I had a Canon A1 by now, but for several years it sat around gathering dust.’

However, all that was to change. ‘In 1993 I hired a Canon EOS 1 and went on safari in South Africa to do some wildlife photography. The experience was a bit like waking up after a long sleep – I was completely and utterly bowled over by the whole idea of doing wildlife photography for a living.

‘When I returned to the UK I submitted some of the images I’d taken to the Planet Earth picture library. They put them in what was the first-ever stock catalogue of wildlife imagery where they immediately started to sell. That gave me the incentive to change careers.’

Steve’s first major decision was what to choose for his first major photographic study. The inspiration, as he explains, came from a visit to his local zoo. ‘My first book, In Praise of Primates, was inspired by seeing a gorilla in captivity – something that inspired me to try to photograph them in their natural habitat. The project took two years to complete and the resulting book was published in 1998 in 10 languages, going on to sell nearly a quarter of a million copies. At that point I thought that I should perhaps travel around the world and photograph other animals.

‘My second book, Untamed, was published in 2004, again in 10 languages. After this I started work on producing photos that could be used in huge outdoor exhibitions. The first one was in Birmingham and ran for 11 months – it was very well received. In total we had nine exhibitions and are currently putting the finishing touches to another in Spain.

’Spirit of the Wild, my third book, was inspired by quotations from the likes of Mahatma Gandhi and Charles Lindberg, coupling pictures from the wild with their words. I’ve also produced a book called Elephant! and a couple of children’s books. I’ve always had a passion for elephants and managed to photograph them from the air and underwater, which is a great challenge.

‘After Elephant! I felt that I really needed to get back to photographing people, as I had done many years before in South Africa. This led to my most recent book, Living Africa, which was published last year. Africa is such a vast and diverse continent and I wanted to celebrate this by capturing everything from the fishermen in Senegal to the elaborate ceremonies of the Woodabe tribespeople.’