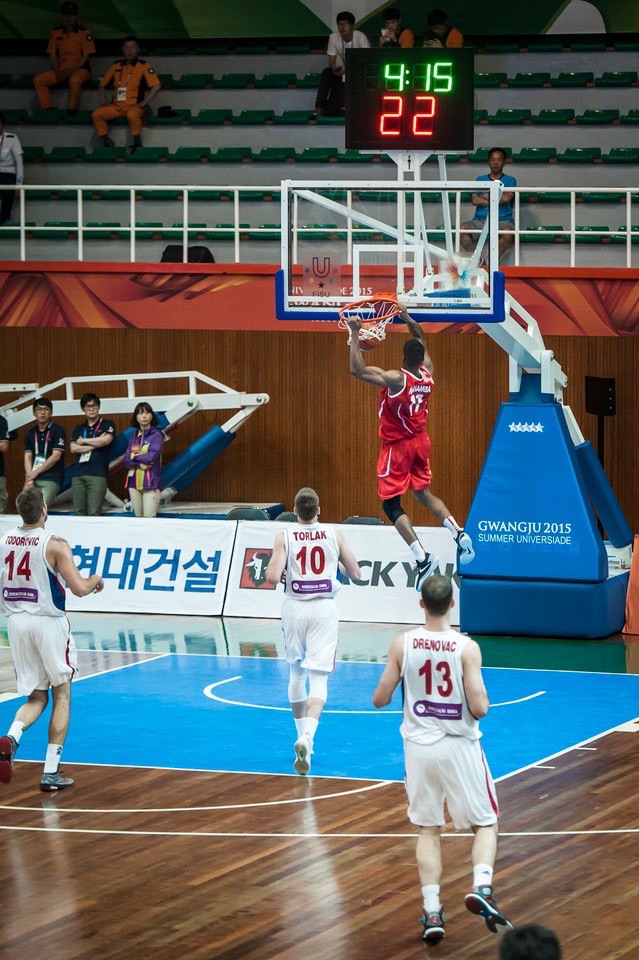 It’s not often that someone standing 6’6” and weighing 209lb could be described as short, but that’s the world of basketball! Kevin Madiamba is a Swiss basketball star who is hoping to be part of the national 3×3 team at the Olympics. This “small forward” was born on February 18, 1994 and plays as forward for the Vevey Riviera Basket team in the Switzerland LNA league.

If you’ve not heard of 3×3 basketball, you’ll be forgiven, because it’s the latest urban team sport to be commissioned by the Olympic committee, and is the most-played in the world. The game is played as you might imagine; three-a-side, on half a court, with one hoop.

Each game lasts just 10 action packed minutes (or less!) and is won by the team who reaches 21 points or whoever has the most points at the end of the 10 minutes. Unsurprisingly, this game is fast, furious, and incredible to watch. The ball used is unique to this form of the game, being the same size as the one used in the women’s full-court game (a size 6) but with the weight of the men’s full-court version (a size 7).

It’s a formalized version of the urban basketball that has been around forever (most of us have played it at or after school as kids), but has taken off as an official sport during the last 15 years. After the success of the sport at the 2010 Summer Youth Olympics in Singapore, the International Basketball Federation (FIBA) made the decision to encourage 3×3 as a standalone game with a complete range of competitions across the globe. Its acceptance was recognized by its inclusion for the first time as an Olympic Event at the next Summer Olympics in Tokyo.

Madiamba is no stranger to playing internationally; at just 17 years old, he made the decision to choose to move to the US alone to pursue his basketball dreams, instead of staying closer to home in Europe, where other agents also offered him places at schools. Leaving behind his family (including four sisters) was difficult, but he doesn’t regret a moment. At 19, he traveled to South Korea to play for the Swiss national U25 Team, where they played against other great teams like Turkey, Surbia, and the US. He then spent a lot of time in New York, where he attended college and played for the Raiders.

Kevin Madiamba is striving to be part of the Olympic dream and hopes to be included in the Swiss 3×3 basketball team. He was really launched on his basketball career by finding a regular spot with the Geneva Lions back in 2015, and since then has had spells for Winterthur and Fribourg Olympic before settling down with the Vevey Riviera Basket side on the north east shore of Lake Geneva not far from Montreux.

Like all modern athletes, Madiamba takes his training seriously, spending hours in the gym, making sure his diet is perfect and studying videos of all his games in great detail. Never has a professional athlete had to be more professional than in 2020. And if the Olympics is your goal, and perhaps even a medal, then nothing can be left to chance. You don’t just have to be good, you have to be at the peak of your performance, as good as you can possibly be every time you go out to play. Competition for places is intense, but Madiamba is in a strong position and has years of international experience behind him. We can’t wait to see what the future holds.

Truitt Battin, Impressing the Masses On- and Off-Field – A Soccer Player with a Vision