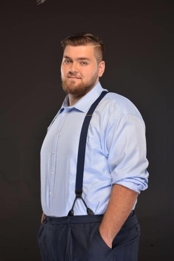 “I want people to feel my energy. The ups and the downs.” Emerging from the Detroit rap scene, Big Juicy is ready to bring something different to the world. Currently working as an independent artist, the Michigan MC has been putting all of his energy into his craft since 2017, releasing a full-length project entitled Blue Eyes in 2019 with fellow Detroit artist Justin Don. Now, Big Juicy is close to finishing his next project, which he says will be his best work to date.

Inspired by legends like Tupac and Notorious B.I.G, as well as newcomers like Travis Scott and Nav, Big Juicy’s style is hard to pin down. Tracks like the high tempo Really Gonna Do and the self-reflective single Lost, shows just how Big Juicy can evolve his style and keep his audience on their toes. The inspiration for Big Juicy’s work is the love of the grind. “People don’t like to show love in the beginning,” he said, “so its almost like you have to prove yourself to get fans.”

With his upcoming project, Big Juicy is sticking to his style-bending ways, changing his approach from song to song. The project is expected out in the coming months, and Big Juicy is ready for the world to hear the fruits of his labor and hard work.

Everybody Knows, the music company behind your favorite memes