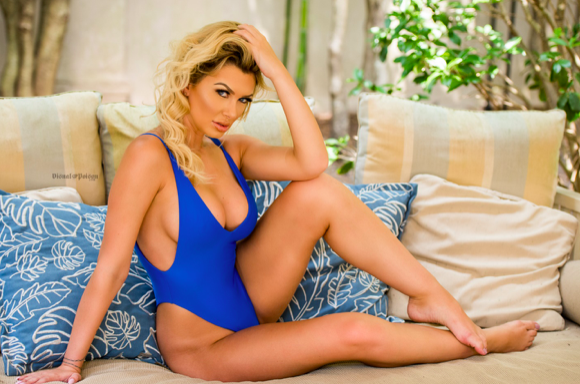 As a published model and philanthropist, Kuoni seeks to use her unique story to motivate others

Andrea Kuoni, also known as AndyKandy, is a model who has utilized social media to become a six-figure earning entrepreneur, published model, and philanthropist. Although the journey to success was never easy, Andrea’s relentless work ethic and positive mindset helped carve the way to becoming a prominent model in the social media space.

Andrea Kuoni’s dreams to be published model began in a small town where she was raised outside of Kansas City. At the age of 17, she was diagnosed with lung cancer and after several surgeries and treatment, she recovered and has been in remission since. Many people discouraged Kuoni from becoming a model, pointing out that published models don’t have scars or tattoos, and they stressed to her that opportunities would be very limited. Andrea did not let self-doubt, or the criticism of others destroy her dreams. Instead, she used this criticism as ammunition to pave the way for herself and other models alike.

Andrea had her first modeling debut in a commercial which opened the doors to opportunities as a promotional model. Andrea traveled the country as a promotional model but had bigger dreams for herself in the modeling industry. In 2017, she decided to apply for Playboy Switzerland. Andrea was surprised to soon find out that she’d be introduced as Playmate to the brand family in their November 2017 issue. Achieving a lifelong dream of hers only motivated her more. Andrea went on to become Playmate of the month for Playboy Mexico, with her debut in their magazine as a new face in December 2018 and centerfold in February 2019.

In a saturated industry such as modeling, Kuoni believes it’s crucial to remain true to your authentic self to differentiate yourself from others. As a manager and mentor to new models, Kuoni encourages her models to be the best version of themselves and to not try and replicate others. By displaying her authentic self throughout her social media, Andrea has been able to captivate and establish a loyal fanbase of over half a million followers.

Kuoni attributes a few traits to her inspiring success as a published model and philanthropist which include authenticity, compassion, and a positive mindset. In her hardest times, Andrea learned that keeping a positive mindset is incredibly important in every aspect of her life. Andrea stated, “If you remain positive, you’ll see the opportunity in everything and never worry about things you can’t change”.

Kuoni’s most recent venture, AndyKandy LLC, manages and connects models and photographers with events and opportunities to expand their social media presence and portfolios. Andrea is also currently working on expanding her model management business and is looking forward to investment opportunities with likeminded models. As for the future, Andrea plans to start a charity with the mission of helping models from all backgrounds connect with opportunities, focusing on small towns similar to the one where she grew up. Andrea has become a self-made entrepreneur, philanthropist, and role model for aspiring models alike. Although becoming a playboy model was a longtime goal of hers, Andrea wants to be remembered as the passionate philanthropist that she is.

We would like to wish Andrea Kuoni the best in all of her future endeavors.