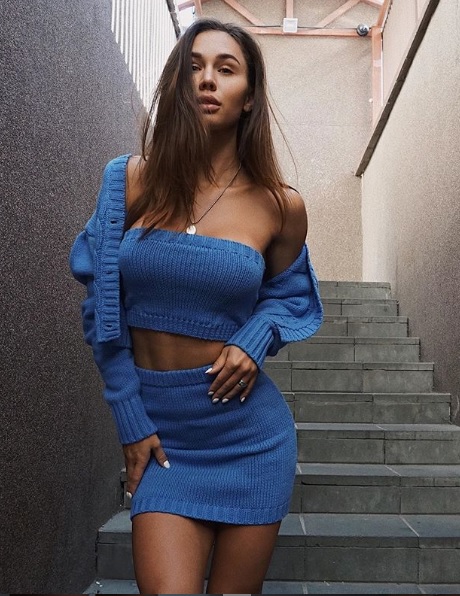 Fitness model Jenny Mosienko was an average girl that grew up in a village in Ukraine. Little did she know that she would grow up to be a famous fitness model with many achievements and a huge fan base on social media. The famous fitness model has 1.3 million followers on Instagram and positive support from her fans.

Jenny got into training from a young age, for she always had a passion for working out activities and the gym. When she is not modelling for photoshoots, she is taking up her free time by travelling around the world. Jenny likes to travel because it helps improve her mood when visiting a new country and exploring their culture.

Her rise to fame started out in 2013, when she was powerlifting professionally and was doing competitions. As she had slowly become known, since she was getting more and more followers on social media. Not only that, but the majority of her photos on Instagram express body positivity, which is a big hit on social media.

After half a year of training, she reached a norm in my category and was qualified as a Candidate Master of Sports. After another half a year, Jenny was about to defend for a qualification of a Master of Sports. After that, she quit that kind of sport and moved to another one; fitness and figure competition, which became a reason for her to try becoming a fitness model.

However, Jenny doesn’t just care about outer beauty, she also cares about the high rate of poverty and child hunger in this world. In her own time, she tries her best to volunteer in order to help make a difference in the world.

When it comes to social media, Jenny is very active and always posts photos and statuses in order to connect with her fans. On her website she has a section for fans specifically, where she speaks with them on a personal level and even sets out games and fun activities for them to do. Jenny wanted to share a few tips from Jenny on how she manages her social media fame and what to do:

What do you advise for people who want to become big on social media?

“Social media is now one of the most powerful tools when it comes to making yourself known. However, it isn’t as easy as everyone thinks it is. Your photos need to be alluring, professional and stand out amongst the other thousands of accounts out there. You also have to be active on social media and connect with your followers. Try to understand what they admire about you, set out some fun activities such as Q&A or guess the caption of this photo. The tools on social media are endless, so there is so much for you to do. You can post stories and shed on your personal life, you can make a website that is for fans only, you can upload photos with other famous people on social media in order to gain a bigger fanbase.”

How do you handle the haters on social media?

“Do not let them get to you, you need to build a tough skin when it comes to the haters. Not everyone is going to like you in life and that’s okay; just keep your head up and keep doing what you are doing in order to earn your success.”

Do you think your passion for fitness helped you rise to fame?

“Yes, I do strongly believe so. When you have a hobby, career or skill that you want to share with the world, you will also see a connection because many people will admire what you do, be inspired or already do it themselves. I strongly believe in body positivity, which is why I am not afraid to show my skin to the world.”

Are there any future projects that you will be doing that we should look out for?

“Yes, I will actually be on the cover for Playboy magazine in Russia! I am very excited for this. You should all stay tuned, because this will be the hottest nude session that you have seen in a while!”

Author Michael H. Forde Sheds Light To Youth On The Importance Of Discipline On The Road To Success

The Fitness Journey of Crystal Wall, a Fitness Advocate, and Blogger