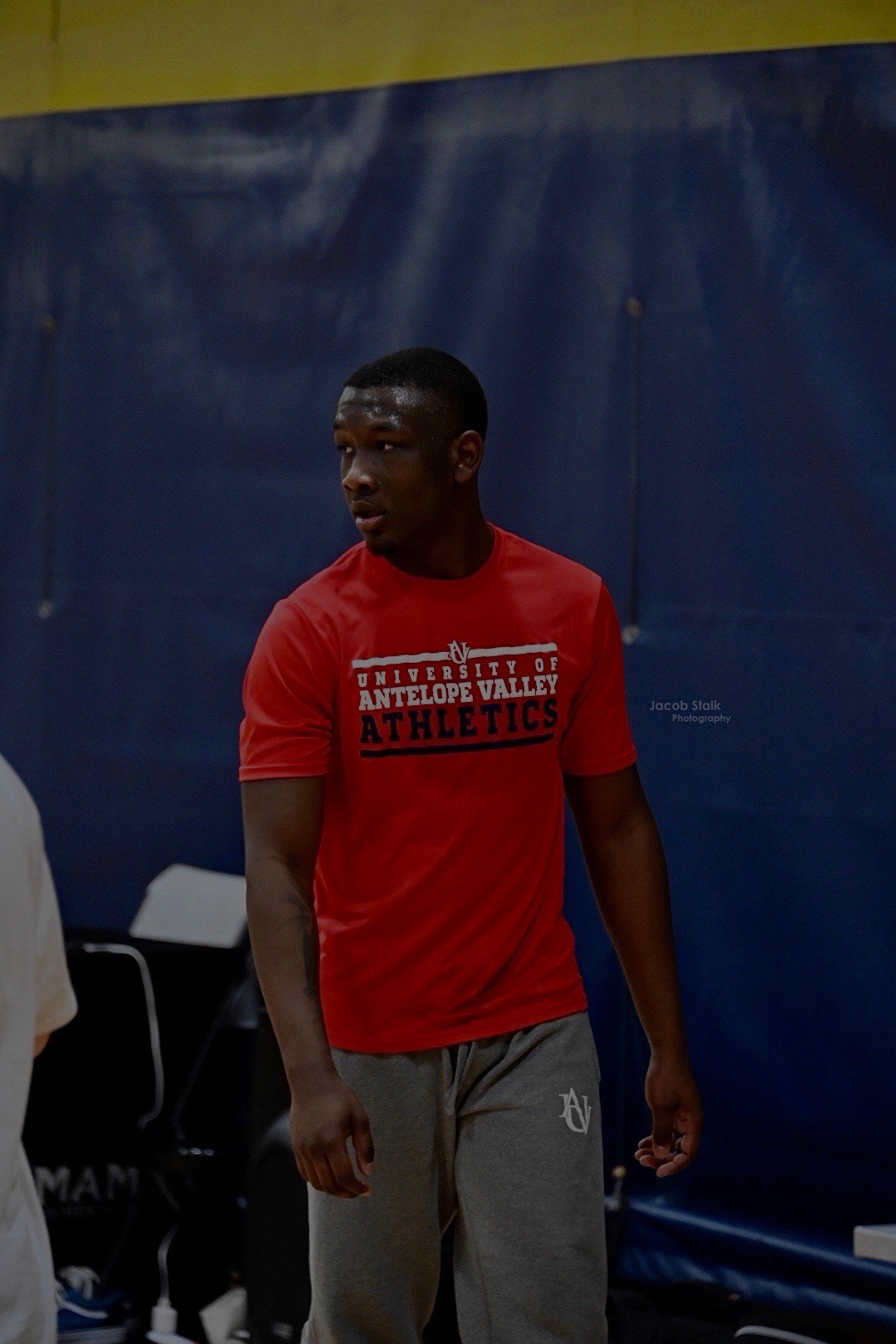 Davion Robinson is a popular and emerging American basketball player from Las Vegas, NV. He is widely notable for being the younger cousin of 3-time NBA dunk champion, Nate Robinson. He also has extended family such as NBA legend Doug Christie (Sacramento Kings) who grew up with his uncle and father; Robinson connected with Christie Jr. many years ago from our research and their family ties made their bond stronger.

Davion Robinson is a collegiate basketball player at NAIA D2 school, University of Antelope Valley located in Lancaster, CA. The freshman star comes from Las Vegas, NV with strong Seattle, WA family ties. Robinson comes from a family full of athletes and notable people he credits for “being a good example of what to be rather than not to be”.

Davion Robinson claims to have had a sister who was a 2-sport star (track and women’s basketball). His sister was a standout for Federal Way High School and once had a standout performance that got her on USA Today. He also had an older brother who played college basketball, an uncle who was a high school football standout, a great grandfather who played professional football Wilson Gulley and still has many family members continuing the athletic legacy his family holds. Within his family tree he’s had many college football/basketball players, high schools stand outs, a few even made it professional in their respective sports.

This past year, Davion Robinson joined the (now) 3-time CalPac Conference Champions to further his academics and athletic journey. Robinson was considered one of the emerging basketball players out of Las Vegas, NV prior to his senior year of high school after standing out at the ScoutsFocus Elite 80 Camp (Seattle, August 2018) and the West Coast Elite All-Star Camp (Utah, October 2018). Robinson graduated Silverado High School last year and is already one of the most notable alumni.

When we asked what motivated Robinson most to play basketball he said, “My family. I want to be the first in my immediate family to take sports to a career path outside of my cousin and a few others. I want to take care of my people (mother, grandparents etc) and be the one everyone looks to. I was made for that pressure and I’m ready for it. My sister was a special talent before injury. My uncle was too. And my brother played college basketball. I was simply next in line”.

But basketball is not just what many can recognize Davion Robinson from. He holds a (now) 18-thousand following on Instagram and has grown to become extremely notable in the eyes of the public. When asked about staying humble with many outlets featuring him and receiving recognition Robinson simply stated, “I credit my grandparents and mother mainly for instilling these values in me that I have been blessed to carry with me”. Robinson also mentioned that his “family is very close knit and strong on representing yourself well and knowing right from wrong”.

Robinson refers to his first collegiate season as a “trial year”. He mentioned he was sidelined a lot due to tears in his meniscus that he had to recover from. His injury brought “self doubt” about how he’d “perform when fully back into the swing of the game” he says. Not too mention, “coming from a family with such status in the city, you feel the pressure of carrying a family legacy that is almost generational at this point” Robinson stated. Prior to his injury he had a couple scoreless games with bad highlights that he remembers vividly to cause “the worst few weeks” of his life. He went from being and feeling hyped all preseason to not wanting to step outside of his dorm because “he wasn’t living up to his expectations and his teammates, peers and others on campus made it very clear to him he wasn’t as well”. But through this, he forced himself to “only be mentally locked” into what pertained to his success such as staying in the gym, finding ways to get better, give incomparable effort and be ready when his time came. Robinson credits his mental strength to how he was raised to not focus on outside opinions but do what makes him satisfied with his livelihood. Robinson did downplay his struggles this season and their significance as he mentions multiple times “there are people who have gone through worse”. He also mentions thinking about his Great-Aunt Betty, Great-Grandparents, Grandparents and Mom who have all gone through health issues and still sacrificed a lot for the better path of him and his siblings and other family members. Robinson stated “I simply owe it to them, whether I’m sick or hurt because they did exactly that for 18 years for me and never made excuses or gave up”.

Robinson’s freshman season went from negative, injury prone to ending on a high note. His last game of the season is where he performed very well. We stopped by to check him out and he was in better shape than he was when we first saw him. Though he needed work as far as IQ and remembering plays (it seemed like), Robinson had played well on defense garnering a block on the defensive end, scoring on the offensive end and rebounding and causing jump balls in his team’s favor on both sides of the ball. His first few possessions we saw him attack an opponent in attempt to make a great crossover move and playing more poised than how he opened the season. Though the Developmental UAV Pioneers took a tough loss in the last game of the season, we saw improvement and a beginning spark in what will be a great journey with much upside for Davion Robinson.

We’ve sent many to check Robinson out on and off the court anonymously and since his last game, him and a few teammates were consistently in the weight room prior to returning home due to the coronavirus outbreak. When we asked Robinson about his off season plans he responded by saying “I’m not in off season, I plan to improve the shape I’m in day by day by staying in the weight room heavily, work my core heavily, condition heavily and work on aspects of my game while making necessary changes so come August I don’t have a repeat of this past year”. We are very much excited to see the growth in Robinson’s career and plan to follow it well. He also credited Phase 1 Sports as the facility he will be training at this summer back home to continue developing his game.

While Robinson is seeking success, he has humbly built a name for himself outside of his family to garner our attention and more is definitely to come. Support the local talent and follow his journey as it can lead to much more!

To check more out on Davion Robinson, go to his official Instagram which is @chosen1drob!

Murad Islamov- is a Cheat Code, Simply an Elite Player