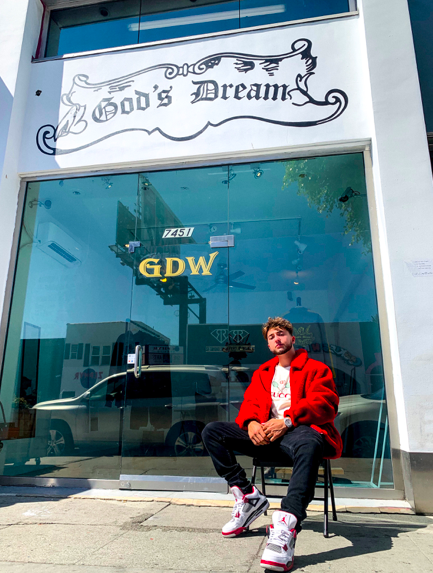 You might have heard about the lifestyle clothing brand known as God’s Dream. The popularity of the company has spiked recently and many people are interested in buying some of their designs. But, what do you know about the man behind God’s Dream- Alec Kesheshian?

Here are some facts that you should know if you are interested in buying from his clothing brand.

He Has Always Loved Designing Clothes

Alec Kesheshian was born in LA after his parents came to America from the middle east. He started designing clothes for God’s Dream when he was 16 years old! It started as a hobby that he would do for his friends, but when he noticed his friends wearing his clothes more than anything else in their wardrobes, he decided to make it more than just a hobby.

He Loves to Travel

Kesheshian was bit by the travel bug- he says that he loves exploring different countries to learn about their history and cultures. While he has not been able to travel since the COVID pandemic hit, he spent much of his time abroad before.

He described traveling as one of life’s greatest privileges and said that he was addicted to it. He enjoys going to a place that is new to him and meeting new people, learning about their culture, ideals, and traditions.

Alec Kesheshian said that his favorite country to visit is Japan. He enjoys the food and fashion scene, but also stated that he loves the people the most. Being able to travel to other countries and meet kind people who speak different languages is the best part for him.

He was surprised that people from other countries would accept him and treat him kindly when they know nothing about each other. He mentioned that this was what he appreciated the most about meeting people while traveling abroad.

Japan has influenced Kesheshian’s clothing line, leading him to create some designs. However, a majority of his influences came from Italy.

Italy was another county that had a profound effect on Kesheshian. While there, he was heavily influenced by their culture, patterns, textiles, and fabric. He decided that he was going to base his ideas for God’s Dream on Italian craftsmanship, with additional inspiration from utopian themes.

God’s Dream evolved from this point on. Kesheshian wanted to capture his experiences in Italy in his clothing line, all while making a business that could successfully bring people together. Italy also changed a lot about his initial plans for the line, transitioning it from a nightlife style to lifestyle clothing.

Alec Kesheshian is an interesting and creative man who enjoys traveling and has been designing clothing since a young age. His background and desire to travel have fueled his inspirations for his designs in God’s Dream, allowing him to create a clothing line unique to him.

In short, the is a lot to know about the man behind God’s Dream, aside from just the clothing brand.

Billy Arora and the new model lifestyle in Los Angeles

Beauty Tips from One of The World’s Top Webcam Models Michel Suarez!