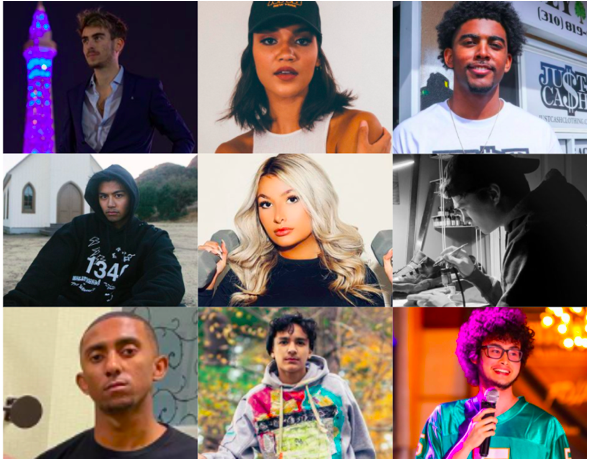 Every year it seems as if the leaders of the world are becoming younger and younger due to the power of social media and the creativity that the internet allows for. If you are under 25, the internet is likely all you know, and navigating the ever-changing landscape of the online world is second-nature to you. For these 10 visionaries, the digital world is the tool that each person highlighted utilizes to reshape their respective industries, and here is a closer look at how it is all possible..

Making her first appearance as a Neiman Marcus model at the age of 11 months old, Angelica Caruso, now 16,  has already had quite an impressive career in the entertainment industry. After developing a passion for singing, Angelica Caruso released her first hit single and music video ‘Rich Girl Mentality’ at the age of 11, which received over 300,000 views. Angelica then went on to sell out her first-ever concert in New Jersey, with rave reviews in The Daily Record Newspaper. With her music style ranging from pop, dance, hip-hop, and R&B, to even rap, Angelica grew as a mega-star at a very young age, traveling all over the United States for events. While establishing a career in modeling and singing, Angelica has gone on to be a social media influencer–with nearly 200,000 followers on Instagram alone–promoting and endorsing brands such as Champ Sports, Bellami Hair, Koko Nugz, RX Water, and many more. This past year, Angelica had many international tours in China, Egypt, and Dubai planned but was forced to reschedule. Nevertheless, get ready to see Angelica take the next step in her career as she landed a role in the new movie “Justice”, set to be shot during 2021. Angelica, at only 16, continues to intrigue the public with her unique style and ability to not only be an entertainer, model and actor, but an influencer as well.

Drawing comparisons to artists such as Pablo Picasso, Basquiat, and Matisse, Evan Sharma is an already accomplished artist at such a young age. Unlike many artists in today’s age, Sharma’s art is a form of vibrant expressionism, and his works display a soulful composition unlike any other. The Canadian prodigy was first recognized around the age of 12 when his work was accepted into the ‘Toronto Art Fair’, being the youngest artist to have his art on display. From there on, Evan’s art started gaining immense popularity on social media and can now be found in private collections in Canada, the United States, and even Europe. Evan’s art has also raised significant funds for numerous charities, including the United Way, the University Hospitals Kingston Foundation and VibeArts. Currently, Evan is transitioning his artistic talents towards the world of streetwear. RBLB (Right Brain/Left Brain) brings Evan’s “wearable art” concepts to life, as you can now find some of his most noticeable works on pairs of converse. With so many accomplishments by the age of 17, Sharma is bound to keep conquering great feats in his near future.

Following her graduation from Parsons School of Design in Fashion Design and Elon University in Art and Entrepreneurship, Natalie Brown, a Peachtree City native, created her eye-catching and debut clothing line, NMB New York. Inspired to design innovative sustainable clothing that people would be excited to wear, Brown has rebranded the idea of up-cycling to create one of a kind, luxury-fashion pieces all deconstructed from vintage and thrifted clothes. The main pieces of clothing in NMB’s line are Unisex Reversible T-shirt Puffer Jackets, which feature a variety of upcycled t-shirts rocking vintage logos. Clearly, Natalie Brown and NMB are turning heads left and right in the fashion world. Celebrities such as actress/singer, Kyra Santoro, have been seen wearing Brown’s unique puffer jackets. With her innovative solutions for a fashionably cleaner world, Natalie Brown should be on everyone’s list for the most influential people under 25.

After rising to Youtube fame through his impressive collection of limited edition sneakers and designer apparel, Blake Wynn has since leveraged his personal connections and become the Founder & CEO of Enclave & Key: a marketing agency that houses the largest roster of NFL athletes of any firm as of the end of 2020. Enclave & Key is quickly becoming a go-to name for companies looking to work with professional athletes, celebrities, and social media influencers.  They currently boast a network of over 2,000 influencers ranging from Youtubers & TikTokers to musicians, supermodels, actors, and more. Beginning in early 2020, and as recently as January of 2021 in Wynn’s interview on the Inspiring Young Aspirers Podcast, he discussed his desire to run for political office. While he has not officially announced his candidacy for any particular election, it is without question that Blake Wynn is a name to watch for in the coming years.

After attending the University of Southern California for film, Justin Escalona, a Chicago native, has become one of the most influential young persons in the United States. Rising to Youtube stardom with over 31 million views on his platform, Justin emerged as one of LA’s noticeable influencers. However, Escalona, not satisfied with just being a public figure, went on to create a lifestyle clothing brand–1340 Collective–which has re-innovated the streetwear industry, earning upwards of 5 million dollars. With rapid growth and a surge of popularity for the original clothing, 1340 has seen celebrities from David Dobrik to Addison Rae wearing their popular items. From painting to filmmaking, Escalona quite literally does it all, and his array of skills are what attribute to him being such an influential figure. Regardless, Justin Escalona can be categorized as an influencer, filmmaker, artist, entrepreneur and who knows what’s next?

Based in New Orleans, James Armour is quickly making his mark on the entertainment industry having already been featured in large publications such as Business Insider & International Business Times. His ever-growing game show, Quality Drinking, consists of a 360 degree, 5 foot wide, rotating table where guests play 5 rounds consisting of 7 minutes each with the goal to finish their glass every round and avoid ringing the bell in the middle. If they last all 5 rounds, prepare for a bonus lap of the game, ‘This or That’. With the help of his business partner and brother, Aaron, the two have curated many insightful conversations and plenty of comedically moments that can be enjoyed from the comfort of your home. While only starting in September of 2020, the game show has hosted a multitude of celebrities from professional athletes & entrepreneurs to musicians & artists with bigger stars on the horizon. Outside of the business, James shows tremendous interest in real estate with a few properties currently under his name. Before the age of 23, he will be expanding his portfolio and acquiring more lots in the coming year. Don’t miss the next episode of Quality Drinking and expect a lot more success from James in 2021.

With his intricate details, Chris Kleha, 20, is making a splash in the custom apparel market. Coming onto the scene after he started custom painting shoes in high school, Kleha has always been passionate about art and the ability of every piece to have new expression. Taking advantage of the free time granted to him from quarantine, Kleha Customs, Chris’ own customs business, was created. After starting in just June of 2020, Kleha Customs has already seen tremendous success, providing customs for a number of social media influencers, as well as professional athletes. Whether the product be basketball shoes, sneakers, or even jean jackets, Kleha’s art keeps an emphasis on originality and individuality to represent each of his clients. With inevitable growth, Kleha’s goal for his business in 2021 is to continue to establish relationships with individuals looking to express themselves through his art on wearable products.

A graduate from the University of Georgia, Alex Zimmer is turning heads left and right as CEO and Founder with his distinguished influencer and e-commerce business, Outlet Hunters. Bringing sneaker-heads some of the hottest kicks at unbeatable prices with ease, Outlet Hunters’ mobile app is becoming the number one way consumers are buying their sneakers. Zimmer, an entrepreneur with an expertise in social media marketing, is set to change the industry of sneakers with his ingenious e-commerce platform. While being located out of Atlanta, the Outlet Hunter’s team is constantly traveling from state to state, sourcing hundreds of your favorite discount and retail stores finding deals you can only dream of. With inventory updates daily, customers are able to shop a new experience every time they enter the app. Using his experience as an influencer, Zimmer has been able to create original content with his insight to organically boost engagement and sales for Outlet Hunters. His astute entrepreneurial skills paired with his reach as an influencer make Alex Zimmer a clear name to watch in 2021.

To leverage the different platforms of social media on top of founding several successful businesses is not an easy task and an accomplishment not many can claim, especially those who are just 23 years of age. However, Sean Kelly, a New Jersey native, can easily hold that title. With over 1.2 million followers on his personal Instagram alone, Kelly can be seen with top-tier athletes and celebrities of all sorts promoting his brand, collecting basketball cards, or even sharing his knowledge of influencer marketing. After creating Jersey Champs almost 4 years ago, Kelly has revolutionized the business of making custom jerseys by partnering with different athletes and celebrities and has created a multimillion dollar company. While Kelly has already achieved copious amounts of success and gained an engaged following of his own, he did not have the idea of stopping there. Kelly, just as much an entrepreneur as he is an influencer, recently created PPE of America, a company providing essential equipment to frontline healthcare workers. Regardless of what title you might give Sean Kelly, he is clearly someone that deserves to be on this list considering how influential he is at only 23 years old.

As a young entrepreneur taking on the fashion industry, Jalen Chatman is pushing his message to strive for financial success to people all over the country. After creating his first clothing line, Ju$t Ca$H, Jalen has been steadily growing his brand and convincing his followers to “chase their bag”. While only starting the business in May of 2020, Ju$t Ca$h has already profited thanks to Chatman leveraging social media platforms such as the new phenomenon of Tik Tok and placing brand support towards social movements like the Black Lives Matter movement. With stylish clothing representing current trends and youth culture, be on the lookout for Ju$t Ca$h to make a large scene in the fashion industry as Jalen aims to expand his brand throughout the Los Angeles and Las Vegas area. Clearly, Chatman is a young and hungry entrepreneur making his presence known, so don’t be shocked to hear his name a lot in 2021.

The Entrepreneurship expert Debarpan Mukherjee, Who has multiple businesses