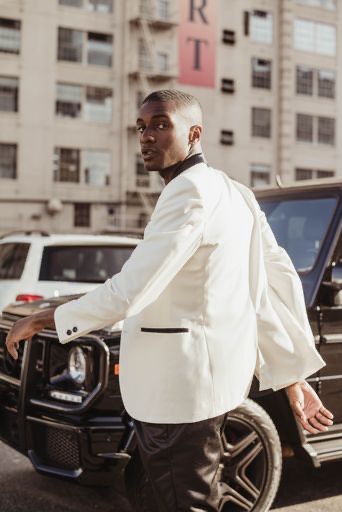 You may have seen Obi Nwankwo in ads for Puma and Gucci. But Obi has a deeper story to tell. Succeeding in Athletics, Corporate America, and Hollywood- Obi Nwanko has discovered his Midas touch.

Born in Boston Massachusetts to Nigerian Parents, education was critical to his welfare and growth. Societal norms in immigrant families pointed to a career as either doctor, lawyer, or businessman- a mindset which helped him top in sports and academics.

Obi attended Boston College on a track scholarship where he would break 7 different school records. In thoughts of pursuing Track, Obi continued to train for the Olympics after college. A dream he gave up to work at Ernst & Young, and later at Accenture.

Obi’s career aspirations went beyond academics and sports. His career as a consultant blossomed with his other passions in modeling and acting.

When he relocated to Los Angeles, his modeling career started to pick up. He received an exciting offer with a Nike campaign. Obi turned down the offer in favor of his consulting job but the regret weighed heavily on his mind. He eventually quit and dove into a busy pool of modeling gigs-appearing in ads for luxury brands such as Gucci, PUMA, Nautica, Bose, Microsoft, Converse, and New Balance.

A career in modeling could often lead into acting. The move to Los Angeles proved to be the right one. Appearing in various projects within the music industry, Obi was in Asap Rocky and Dapper Dan’s “King of Style”, Justin Timberlake’s “Man of the Woods Your”, and Tyler the Creator’s Grammy Performance. Obi also appeared in cameos and played guest roles in multiple Netflix Originals including “Dear White People” and “Family Time”.

Obi attributes his sports training for his eventual all round success. “Acting is a long grind. But sports taught me patience and consistency. You aren’t going to become an All-star overnight. It takes time… I didn’t run my fastest race until race of college”.

Six Steps to Win Every Debate