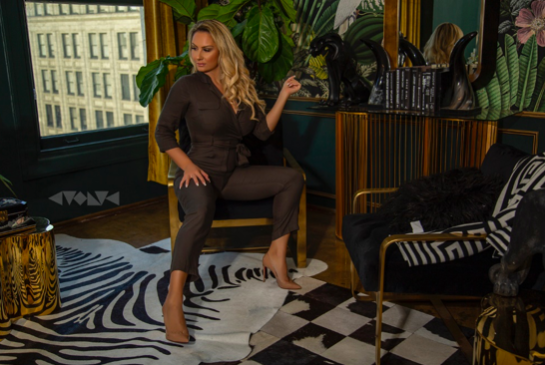 For millions of people all over the world, scrolling through the various social media platforms has become a daily ritual. For some utilizing social media is a form of entertainment or used to connect with friends and family. For Monica Huldt, social media became the basis of her six-figure earning career. Monica is a self-made social media sensation who has discovered extraordinary achievement and built her own empire through social media. Monica is a business-minded model with an entrepreneurial spirit who has sacrificed everything to pursue her dreams.

Monica was born in Poland and later moved to a small town in Sweden when she was 7 years old. Her upbringing was nothing short of difficult. As a foreigner in a small town and a troubled home life, Monica was bullied, leading to her battle with depression and eating disorders. Despite all the odds against her, Monica persevered and obtained her bachelor’s degree in education. After a year of teaching, Monica realized she wasn’t in the right profession and began working as a business developer, shortly after opening her own nail salon business. However, Monica had always dreamed of modeling, a career which her mother highly disapproved of. It was in 2014 that she decided to finally move to the United States to pursue her dreams as a model.

Upon her arrival to the United States, Monica noticed how models were utilizing social media to jumpstart their careers and she made the decision to dedicate herself to growing her social media platforms. Through consistency, patience, and a positive mindset- traits Monica expressed are crucial in building any business, she was able to gain great success on Instagram, cultivating a fanbase of nearly a million followers. Monica stated the following:

“If you pursue a specific goal and you aren’t maintaining a positive mindset, you will not succeed. Often times, if you can’t control your mindset you will begin to become desperate for success, and at that point you’ve already lost.” – Monica Huldt

Monica’s entrepreneurial spirit, and sky’s the limit mentality has always kept her on her toes in the business realm as well as expanding her own brand. Monica’s prior business knowledge and modeling skills have since dominated the next big thing: OnlyFans, the subscription-based platform where models freely post and make an income doing so. Monica attributes her success to strategically setting herself apart from others, being authentic and creating friendships with her fans. Monica expressed that her fans look to her as a close friend, and she truly enjoys learning details about their lives such as their interests and passions. During the COVID-19 pandemic, Monica has found it especially important to be there for her fans as many go through trying times. Through this dedication to her platform and fans, Monica has built a six-figure business in which she is her own boss.

Although Monica has had exponential success through social media, it was never easy and came at the expense of losing many important people in her life. Despite the many obstacles she has faced, Monica is proud of who she has become and has also dedicated a substantial amount of time as an advocate to end the stigma on women in the adult industry. She plans to continue growing her modeling career and creating a real estate business with her husband that they can hopefully pass on to their future children in the future. Rest assured that her journey has just begun, and you will be hearing more of Monica Huldt in the future.

You can keep up with Monica Huldt on her Instagram.