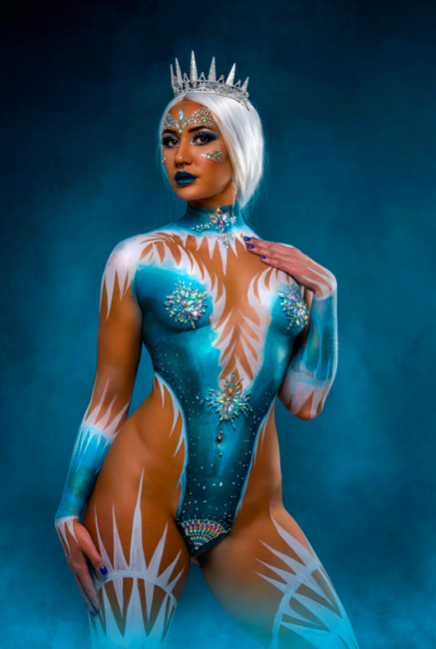 If you are someone who regularly scrolls through social media, odds are you’ve come across popular model Brittany Crisp. Crisp is a social media sensation who has grown her following on Instagram alone to nearly 400,000 people; however, prior to becoming a model and influencer, she was just a small town girl who was unsure of how to make her ambitious dreams become a reality. Brittany grew up in the quaint town of Exeter, New Hampshire, and although it may not seem like it from the outside, her upbringing wasn’t the most pleasant.

When Brittany first entered high school, she suffered three long years of bullying. The upperclassmen girls at her school ridiculed and teased her from her freshman year until the end of her junior year- something that can clearly take a toll on a young girl’s self-confidence. Luckily, Brittany managed to bounce back from this traumatic experience, and set her sights ahead to accomplishing many of her ambitious goals. After graduating from high school, she left Exeter and took off to Vermont for college. In school, Brittany studied graphic design and later went on to work full-time as a designer for seven years.

Although Brittany is skilled and passionate about designing, she continuously felt herself longing for something more. For years she thought that becoming a designer was her ultimate goal; however, with the recent development of social media creating a path to the modeling industry, Brittany desired to pursue a full-time Instagram influencer and modeling career. From the time she was a young girl, Brittany has always drawn inspiration from the women gracing the covers of Maxim Magazine, Sports Illustrated Swimsuit Edition, and Playboy, and she has always dreamt of one day being on the cover of a magazine herself.

Brittany’s journey on social media began a few years ago when she returned to the fitness world after taking a long break, and she immediately began sharing her results on Instagram. She quickly realized that she enjoyed sharing her progress with others, as she has a strong passion for helping others learn to love their bodies. Her primary goal was to show her followers that it is possible to have your dream body through consistent exercise and nutrition. As someone who is authentic and doesn’t sugarcoat anything, Brittany has always stayed true to herself and to her audience. Overtime, Brittany’s authenticity paid off as she built a strong fan base through the genuine interactions she had and still has with her fans. She is very proud that she is strong enough to be transparent about her life, and always strives to share her negative experiences on social media in hopes of helping others get through difficult situations. Getting a taste of what it was like to influence people to live a healthier, happier lifestyle and to be proud of their hard work was just the beginning of her journey.

Fitness soon opened a door to the social media lifestyle that Brittany had once imagined. Her biggest influences in the social media industry were people such as Anllela Sagra, Katya Henry, Sommer Ray, and Lauren Driainfit. She greatly admired how these women were so confident in themselves and could show off their bodies as if they had no insecurities whatsoever. Brittany eventually developed the same confidence in herself, and now she regularly posts a variety of stunning content on Instagram as well as OnlyFans, a subscription-based platform that’s quite popular among social media models and influencers. Aside from the fame that Brittany is quickly accumulating, she also now makes more money than she ever did working in a conventional job. In fact, Brittany has multiplied her previous income over the last few years, and with a rapidly rising fan base, we can only assume that it will continue to multiply.

So, you may be wondering what a small town girl like Brittany does with her money? Well, the answer is surprising- with her high salary, Brittany plans on saving up to eventually go back to school for her Master’s degree in business, and plans to one day start her own graphic design firm. Overall, Brittany wants to be known as a small town success story. She wants to be recognized for her successful modeling career, and has high hopes of being featured on a magazine cover in the near future. With her talent, lovable charm, and dedication to excellence, we have to doubt we will soon see Brittany Crisp on a cover soon.

Readers can keep up with Brittany Crisp on her Instagram.