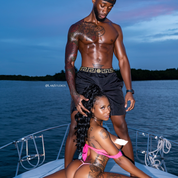 Throughout history there have been many artists who have made a name for themselves in New York. By no means is New York done producing talent, and King Nasir could be the next one to make it out of the big apple.

Starting out at the age of 16, King Nasir knew he was destined for something great. Things were rough for the artist as he was trying to find the right process. Now with two releases under his belt, it’s clear that King Nasir has found his flow and is ready to dominate the game.

His Debut single “Viral” was the track King Nasir used to introduce himself to his new fans. After this, the rapper dropped his second track “Fade”, which is his most recent release. With both these releases, King Nasir has started off with a strong music catalogue giving him a great start to a future career.

With New York constantly breeding stars, King Nasir could be up next. He is doing all the right things by releasing quality content shaping his fans impression of him. If he continues on this path, King Nasir will soon gain recognition in his city.

JAEA, a Singer and Songwriter Based in Los Angeles, has Kickstarted her Musical Career on a Positive Note