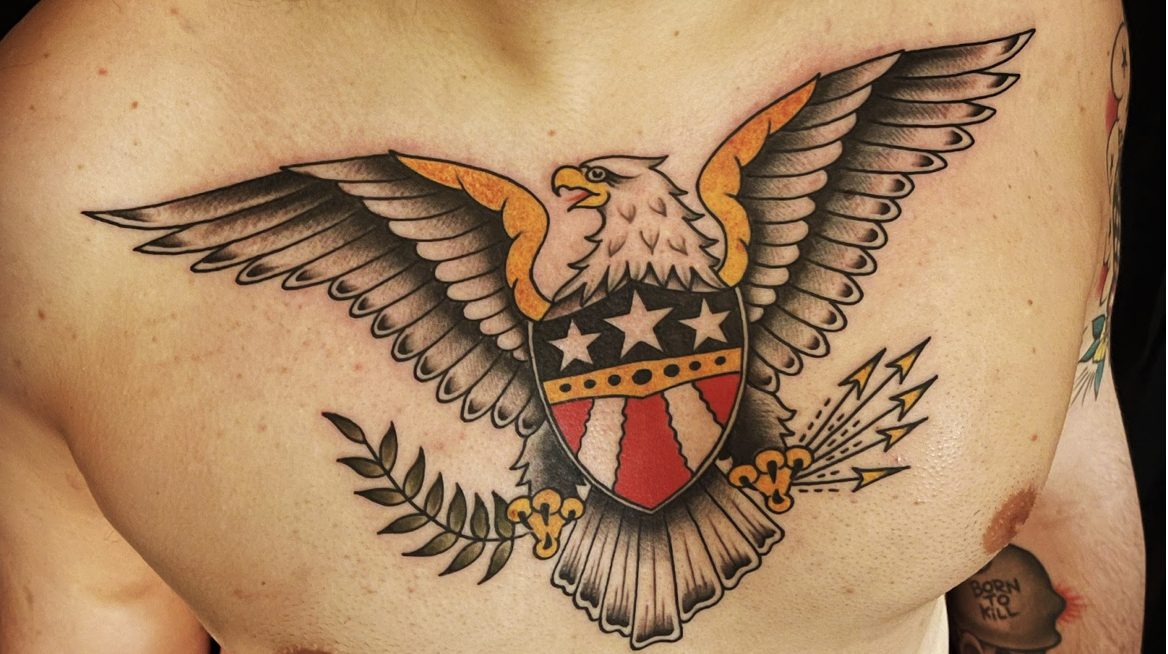 After touring the world and appearing in different shows and tours, Tim Beck has returned to his roots as the owner of Freedom Ink Tattoos, the popular tattoo shop in Peoria, Illinois.

Welcome to Timothy Beck’s fascinating world. Tim’s unique juxtapositions, whether on the skin, paper, or canvas, merge surrealistic designs with realistic elements while interweaving symbolism and parables with his multicolored creative blends.

Tim’s professional career has unsurprisingly taken him to artistic destinations, as he has been passionate about art for as long as he can remember. He was captivated by painting shows on television as a child.

It was not long ago when Tim dropped out of high school to pursue his career in music; Tim understood early on that making a career as a musician is complex, and many tours later in his bands, he decided that lifestyle couldn’t pay the bills for long. Hence, tattooing gave an opportunity for him to be creative while also delivering the bills.

Growing up in Peoria, Illinois, it took him to get a tattoo for it to ‘click.’ “I can do this better than this guy!” Tim thought as he watched the tattoo artist do his first tattoo. While learning to tattoo unprofessionally on his punk rocker buddies and family.

Some years down the road, Tim gave the artistic dream a shot after his future mentor, Nick Mccarty of Pekin, Illinois, who later took Tim on as an apprentice and taught him the sacred art of tattooing the correct way.  After about four years under the supervision of Nick, he went to expand his career in 2001 to work with a friend and colleague in the industry, Cleen Rock One, who was very well known for being one of the forefathers of ‘new skool tattooing’ in the late 90s to early 2000s. While working with Cleen Rock One, Tim was given enough money to scrape by while he honed his tattoo skills and built up a clientele, progressively learning the ropes of the ink trade.

Fast forward a few years and a lot of hard work and learning later, Tim Beck is now happily working as a full-time tattooist at Freedom Ink Tattoos studio. It is a tattoo shop that Tim owns in his birthplace of Peoria, Illinois. The upscale tattoo studio also features a gallery of Tim’s fine artwork; it is something that one has to experience firsthand.

Though the transition from singer to tattoo artist was a significant shift in scenery, Tim, his wife Charlotte, and their three children live happily together in their hometown. Given the city’s vibrancy and the inspiring atmosphere that exists there. Timothy moves on each day with a genuine love for the artwork he does and a genuine drive to learn and better.

Tim enjoys tattooing concept-driven pieces, particularly when a client shares an emotion or meaningful story, allowing him to convey the notion onto flesh graphically. Tim appreciates utilizing his imagination and figuring things out rather than having concepts stated out for him. He is a fan of using symbols, metaphors, and analogies to convey meaning.

In addition to his ever-expanding tattoo collection, Tim is frequently found creating artwork in a variety of different mediums. While Tim enjoys digital art, colored pencils, and acrylic work, his preferred medium is tattoing. Tim has the ability to transform his ideas onto skin in his signature surrealistic tattoo styles. His paintings, drawings, and tattoo work have been featured in a multitude of magazine and book publications throughout the world.

Tim is ready to extend his wings and expand artistically, despite the fact that he feels he is still in the cocoon period of developing his work. He is a big supporter of learning and growing, and he believes that “the wisest individual on the planet is only wise by first admitting that he doesn’t know it all.” He hopes you will join him on his educational path for many years to come and welcomes you to his thriving world of creation.