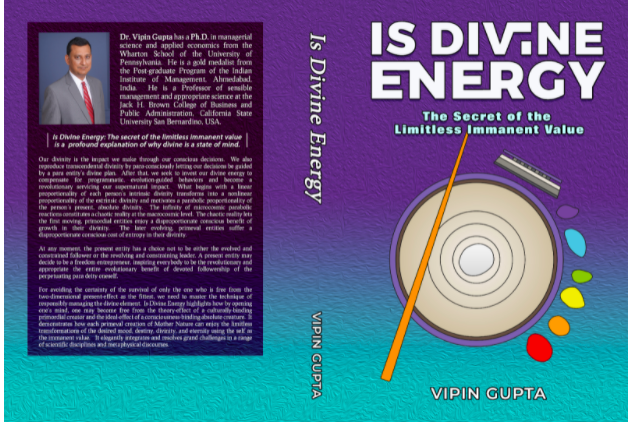 Professor Gupta offers a precise solution to the four or more-body problem that has baffled scientists since Newton and Einstein: Project VIPIN.

In a new series of twelve books being published in 2021, under Project VIPIN, Vastly Integrated Processes Inside Nature, Professor Vipin Gupta clarifies how any number of bodies sequentially interact with one another and the effects of the interactions on the movements of each body in the sequence.  He has just launched the fourth book, Is Divine Energy: The Secret of the Limitless Immanent Value.  In an exclusive interview, Professor Gupta offers a glimpse of the secrets revealed in this book especially and in the project generally.

Why is the Value Immanent?

One of the toughest problems in physics is a four or more-body problem. Ever since Newton’s discovery of gravity, scientists have believed that no general, analytical solution exists to predict with mathematical precision the gravity-shaped movements of four or more bodies.

Suppose Somebody is going in a spacecraft seeking to discover Anybody of interest in space.  Somebody is a special star of Everybody’s attention and attraction.   Anybody is a general star Everybody wishes to attract using Somebody as the medium.  Everybody bio-electrically repels their attraction consciousness to Somebody, so that it may attract Anybody to come out of hiding and become Somebody who can help Everybody discover Anybody like it.

If we look at Everybody carefully, it comprises a Group of Bodies.  A Body decides to be a part of Everybody, reproducing the behavior of others by making their collectivity its Twin Body.  The Body trades the reproductive energy of the Twin Body and reproduces that as its gravitational energy.   When a Body is attracted to reproduce what the Twin Body is doing, it is manifesting a gravity-shaped movement.  Twin Body interacts with the Body’s consciousness to motivate the Body to reproduce its reproductive energy, which is the gravitational energy shaping Anybody’s behavior by curving its perpetuating linearity.

Each Body is not a part of Everybody.  It has the freedom to not reproduce the behavior of the collective Twin Body.   Instead, it may decide to be Nobody who is observing Everybody from a tangent, waiting for the right moment to celebrate the joyous moment of discovering Anybody alongside Everybody.   Nobody seemingly is a fragment of Everybody that becomes the last body to join Everybody.  Nobody’s fragmentation is an illusion because whether or not a Body joins Everybody, it is still a part of Everybody and immanent within it.

What is the Secret to Being Limitless?

Another option is for the Body to be the Matter that forms Everybody.  A Body may be a system where Everybody is conceived, incubated, incarnates, grows, and develops into a system, with power to conceive another set of Everybody as its part.

Thus, a Body may also be the Anti-matter, that is part of the system and has the potential to be the Matter that forms Everybody.

Finally, a Body may be a Twin Matter that imparts its gravitational energy to the Matter that presently constitutes the Universe, so that the Universe may start behaving like the Body and let it be the Universe that is conceiving multiple Universes of Everybody limitlessly.

How does one form Divine as a Thing?

A Thing may also either reproduce the behavior of Anti-Thing (eleventh body) or shape that behavior as the Twin Thing (twelfth body).  Therefore, it has a divine property.

A Person is the thirteenth body.  A Person has a freedom to conceive the Thing as the Ideal Object it wishes to ultimately discover by discovering Anybody.   In that case, the Person behaves like the Twin Thing and the Ideal Object as the Anti Thing.  The Person’s divinity gifts the divine property to the Thing.

Each person may decide to be a thirteen-body system.  Each person may decide to let another thirteen-body system, within or without a twin person, be the anti-person shaping its behavior.  Thus, the essence of Mother Nature is a four-body system, comprising the diverse forms of superpositioned quantum bodies, disembodied substrate matter, embodied objectified things, and moving, subjectively conscious, and objectively energized persons with consciousness of the other three bodies as apparently autonomous systems but not oneself.   That four-body system is known as Odderon.   It manifests the correlation among the Creature, the Creation, and the Creator, mediated by oneself behaving like the Almighty Creator.

How can Divine be more than Energy?

What motivated the Project Vipin?

There is a word in Tibetan Buddhism: Jinpa. “Jinpa is the ‘gift of consciousness’ to someone I know to be one with nothing but the consciousness of what I have given, enjoying the perfection of my giving through a complete surrender for the conscious well-being of the universe.”

How to get hold of the first four books in Project Vipin?

Professor Vipin Gupta is a professor of management and a co-director of the Center for Global Management at the Jack H. Brown College of Business and Public Administration, California State University, San Bernardino. Dr. Gupta has a Ph.D. in managerial science and applied economics from the Wharton School of the University of Pennsylvania.

What Are the Steps to Filing A Personal Injury Case?