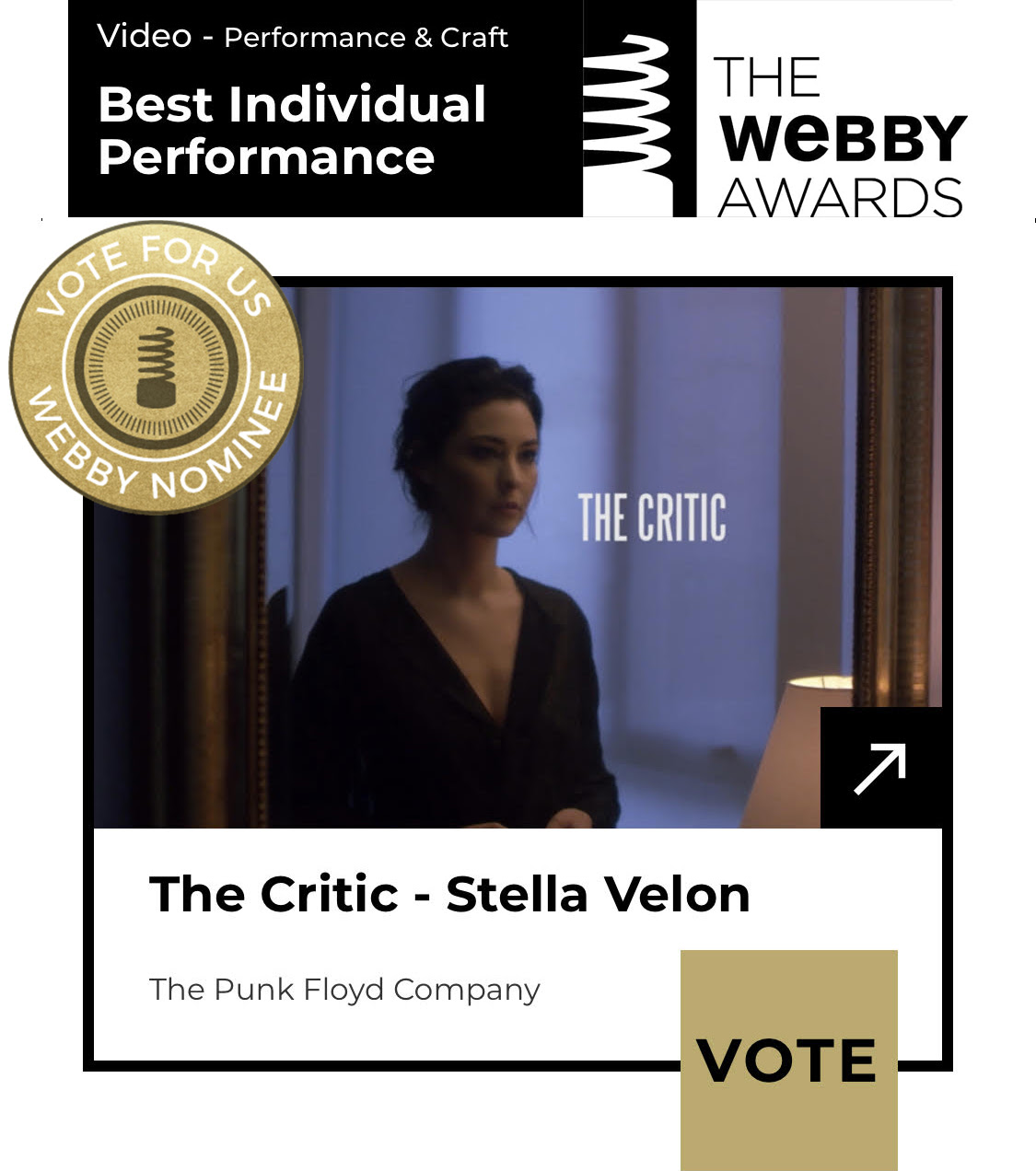 Fans from around the world have started voting for the 24th Webby Awards. There are some exciting nominations this year, including newcomer Stella Velon, and all votes for The Webby People’s Voice Award must be cast by the public on the Internet before May 7.

Stella Velon and the company she co-founded with Jean Gabriel Kauss, The Punk Floyd Company, have been nominated for their critically acclaimed film ‘The Critic’. The category they are nominated in is Best Individual Performance in the Video: Performance & Craft Category.

The psychological short drama has already reaped in over 20 awards since its release in 2018. Stella Velon is an actress and filmmaker who is based in Los Angeles, and her company produced her award-winning directorial debut, which she also wrote and played the lead in.

All Webby nominees compete for two awards in their respective categories, the Webby Award selected by the Academy, and the Webby People’s Voice Award voted for by internet fans worldwide.

The Webby Award and The Webby People’s Voice Award are among the most coveted awards in the industry. The members of the International Academy of Digital Arts and Sciences (IADAS) decide on the winners of the Webby Awards, but the public also gets a say in the choice of winners for The Webby People’s Voice Award. Webby nominations for each category are chosen from the five best, and these awards distinguish the excellence of the nominees.

Nominations from different categories include Idris Elba and Billie Eilish

These are some of the exciting categories and their nominees.

In the category for the Best Web Personality/Host (Video) the nominees include Desi Lydic Womansplains from ‘The Daily Show with Trevor Noah’, Joe La Puma from ‘Complex’s Sneakers Shopping’, Little Late Night: The Foundry@ Meredith from Amazon Studios, The Washington Post’s ‘Dave on TikTok’ and ‘Does it Fart?’ from Yellow bear Studios.

Nominees for Best Writing (Video) include The Lift: & Co./NoA, #MoviePosterMovie ‘In The Time It Takes To Get There’: from Black Dog Films, The Truth is Worth it: Droga5, AFTERSHOT: An App to Help Cowardly Politicians Talk About Gun Control: Kelly&Kelly and National Alliance on Mental Illness (NAMI) – Naught Or: Wieden + Kennedy.

Trump’s Best Words 2019 from the Daily Show with Trevor Noah is a nominee in Comedy Shortform (Video) and it joins Billy on the Street with Chris Evans: Funny Or Die, Icelandagram: The Mystery Hour, Full Frontal with Samantha Bee’s “Historians Roast the President and Making It: Nick Offerman & Amy Poehler Pun-Off.

Other notable nominations include ‘Meet Silvia Fendi, the woman who stepped into Karl Lagerfeld’s shoes’ from CNN Worldwide in the category for Fashion & Beauty (Video), from Variety (Video), one of the nominees are ‘Leonardo DiCaprio & Quentin Tarantino Break Down Once Upon a Time in Hollywood’s Main Character’ by Condé Nast Entertainment.

The five nominees in the Viral (Video) category are Best Ever Food Review Show, Billie Eilish Watches Fan Covers On YouTube, Sleeping Beauty Proposal: Friends At Work, Motherly: I was going to fold the clothes but instead I held you and La Noria a short film by NightWheel Pictures.

In the Arts & Entertainment (Social Video) category, Tom Hanks is nominated for # NiceTweets with Tom Hanks.

Webbys From Home will replace the canceled ceremony

In this extraordinary year of COVID-19, the New York ceremony for the 24th Annual Webby Awards was canceled. The ceremony will be replaced with an Internet celebration on May 19, making it more inclusive. Like Stella Velon, and ‘The Critic’, all nominees have contributed work of excellence and also made an impact on audiences.

Awards won by ‘The Critic’ to date

Stella Velon’s performance was lauded as “one of the best leading performances of the year” by Chris Olson, lead critic, and Editor-in-Chief of UK Film Review. In addition to praising the film as a “particularly poignant piece of cinema in the current social climate”, Olson also described her dialogues as “exceptional”. Nick Bartlett of Critical Popcorn wrote about Velon as one who is “clearly incredibly talented” and “one to watch out for.”

The most recent recognition for ‘The Critic’ was when it was named one of the five winners of the inaugural All Voices Film Festival celebrating diversity in front of and behind the camera, launched by Amazon Studios and judged by executives from there and IMDb.

The Internet is where everybody can find relief from the difficult Covid-19 related events right now. The Webby Awards will offer everyone the chance to take part in choosing their favorite videos, performances, and artists right now after weeks spent at home watching these innovative and exciting contributions to the industry.