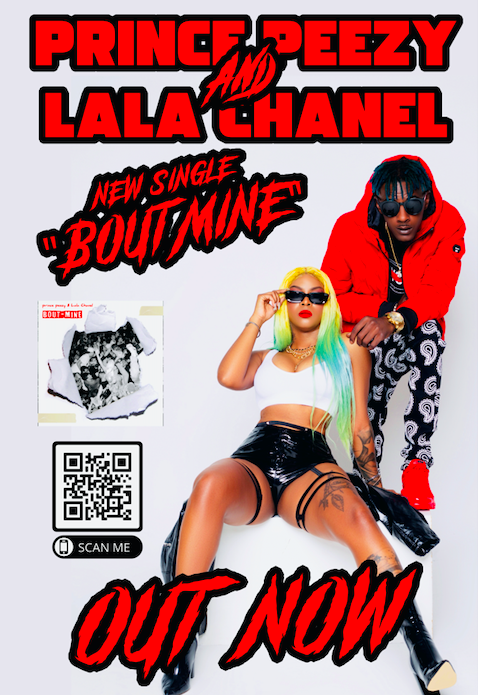 Prince Peezy and Lala Chanel have released their new music video titled, “Bout Mine”. The new music project is available for listeners on YouTube and major music streaming platforms. “Bout Mine” is full of energetic vibes that can leave listeners in a highly energetic state of mind.

Prince Peezy and Lala Chanel possess everything that it takes to excel in the evolving music world. The two artists belong to different cultures and they know how to create music worth listening to for their audience.

Prince Peezy & Lala Chanel shared a short music video clip in their story on Instagram. After seeing the quality of music in it, the listeners started expressing their happiness about it. Now, the official music video of “Bout Mine” is out.

And it is full of energetic vibes and trap sound. Its music video contains everything that it takes to gain the attention of the target listeners. It has got high-quality lyrics, diverse music elements, and a trap sound.

Listening to this music song can take a person to an invincible state of mind. For those who are going through a phase of self-doubt and low energy, “Bout Mine” is a great music video to uplift their spirit.

Every second of “Bout Mine” contains positive and energetic sounds to fill listeners with refreshing vibes. It presents an elixir of music and it can give a high dose of entertainment for listeners.

Owing to its high-quality music and lyrics, the music video has started receiving positive reviews on YouTube. Besides, listeners are really appreciating the works of the hip-hop duo, Prince Peezy & Lala Chanel on many other major music streaming platforms.

Positive reviews on the music video, “Bout Mine” is helping hip-hop artists solidify their position in the music entertainment industry. It is facilitating the hip-hop music duo to expand its reach in the music world.

“Bout Mine” has got a natural flow of music to leave listeners in a mesmerizing state. Prince Peezy & Lala Chanel have really shown their true potential in this music video. Both the South Florida Broward County-based artists have presented different refreshing sounds with “Bout Mine”.

The song is distributed through a deal with EMPIRE Records through their own independent label, Dream Squad Records. Both the artists are known for presenting real-life situations in their music. And they have done the same in this song.

The music video is full of diversity and it displays reality to make the audience enjoy their time well. The music project is receiving a good response from listeners. And it is expected to set a new record for the hip-hop music duo.

Giovannie Pierre-Louis, aka ItsGiovannie, is Creating her Music with Modern Touch from Mixed Genres