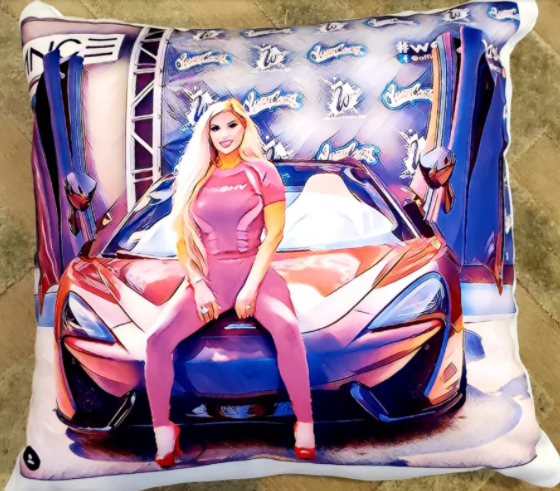 With the emergence of technological advances, people in the entertainment industry are discovering more ways of expanding their platforms and improving their exposure. As a matter of fact, the internet has evolved into a vast tract of endless possibilities and numerous opportunities. Taking heed of this revolutionary shift, Queen of Hollywood Marcela Iglesias decided to dip her toes into the world of non-fungible tokens, specifically Rarible.

Proving to be unstoppable at her game, Marcela Iglesias made her way Rarible and came out with her own token. The Queen of Hollywood explained that she is releasing a one-of-a-kind non fungible token (NFT) that she will be delivering to anyone who is on the lookout for one. “I am utilizing the same platform that Lindsay Lohan and many other celebrities are using,” she added.

With no plans of slowing down anytime soon, Marcela Iglesias shared that her one-of-a-kind NFT is just the beginning. She intends to drop three more releases, and according to her, each non-fungible token will come in with an extra gift, in this case it is a signed pillow, containing her signature. Unlike the conventional autograph written on paper, the token will prove to be useful for those who will be acquiring it. Indeed, Rarible has revolutionized the landscape in ways no one could ever have imagined.

Since entering the entrepreneurial realm in Holywood, self-made mogul Marcela Iglesias has been gaining nods with her jaw-dropping features and relentless drive for success. Born in Argentina, this go-getter has shown that stark and humble beginnings can still lead to a life of triumph.

More than just a pretty face, Marcela Iglesias pounded the pavement with her creative flair and remarkable vision. In 2017, the entrepreneur launched her newest and most exciting business venture yet, “Marcela’s Way,” which is a platform for personalized life alteration motivation.

Today, Marcela Iglesias stands at the helm of The Plastics of Hollywood, an outstanding management company and lifestyle brand. Immensely fueled by the desire to make her mark on the industry, she continues to take significant strides in taking her career to greater heights.

With her newfound confidence, Marcela Iglesias was able to find an incredible new man, who was raising three children. Together, the couple created a happy and healthy modern family built around the pillars of support and understanding. Looking back, the Queen of Hollywood cannot be any more grateful for how far she has come.

Aside from her thriving success, Marcela Iglesias is also regarded for serving as the much-needed voice for empowering women. Her positive and inspiring journey has garnered the attention of many Angelino women missing a sense of purpose in their lives. She wants to send across the message that being married and having a family can in no way hinder anyone from accomplishing their goals and fulfilling their ambitions.

As can be gleaned from her story, Marcela Iglesias is a force to be reckoned with. Being someone who is always on the lookout for improvement and growth, she dauntlessly conquers Rarible. She sets her one-of-a-kind token as a reminder that anything is possible for those who work hard.

Sunny Bunny Swim: A Swimwear Brand Dedicated to Making a Difference Across Communities

Speaker Secrets: The Online Course to Help You Start a Speaking Career