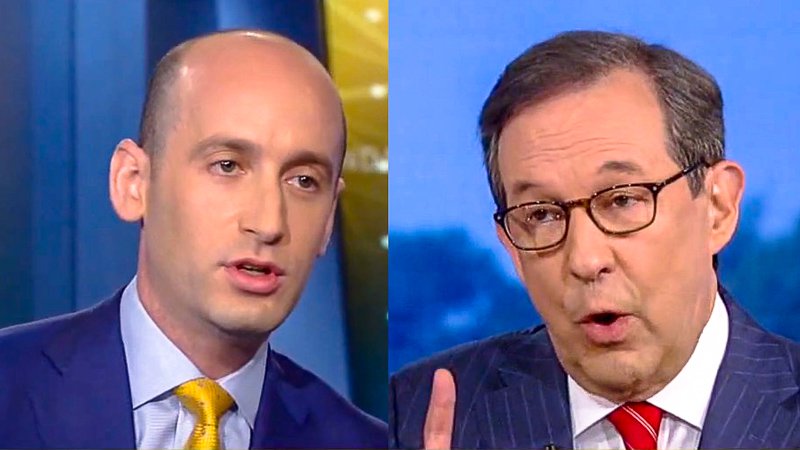 The exchange came during an interview in which Wallace repeatedly pressed Miller about Trump’s recent comments and his history of controversial statements.

Wallace brought up the “send her back” episode as the two engaged in a back-and-forth about Trump’s recent attacks against a group of minority congresswomen on “Fox News Sunday.”

Miller said he rejected the notion that “if you criticize someone and they happen to be a different color skin that that makes it a racial criticism.”

“If you want to have a colorblind society, it means you can criticize immigration policy, you can criticize people’s views, you can ask questions about where they’re born and not have it be seen as racial,” Miller said, prompting Wallace to ask, “Can you also say, ‘Go back where you came from’?”

Miller responded by noting that Trump had already disavowed the “send her back” chant that occurred as the president targeted Omar, a Somali refugee, at a rally.

Wallace interrupted, stating that Trump was only “clear after the fact.”

“Excuse me, he let it go on for 13 seconds, and it was only when the chant diminished that he started talking again,” Wallace replied. “He said nothing there or in his tweet after the rally that indicated any concern about the chant.”

Miller reiterated that the president “disagreed with” the chant.

“But the core issue is that all the people in that audience and millions of patriotic Americans all across this country are tired of being beat up, condescended to, looked down upon, talked down to by members of Congress on the left in Washington, D.C., and their allies in many quarters of the media,” he added.

The interview came one week after Trump told four freshman Democratic representatives — Omar, Alexandria Ocasio-Cortez (N.Y.), Rashida Tlaib(Mich.) and Ayanna Pressley (Mass.) — to “go back” to the “crime infested places” they came from before speaking out about the U.S. government.

The House voted days later to condemn the remarks as “racist.”

Trump has stood by his comments, saying that the congresswomen should leave the U.S. if they are unhappy. He said last week that he was “not happy” with the “send her back” chant at a North Carolina rally.

Trump says he will meet with Schumer ‘ASAP’ after border visit