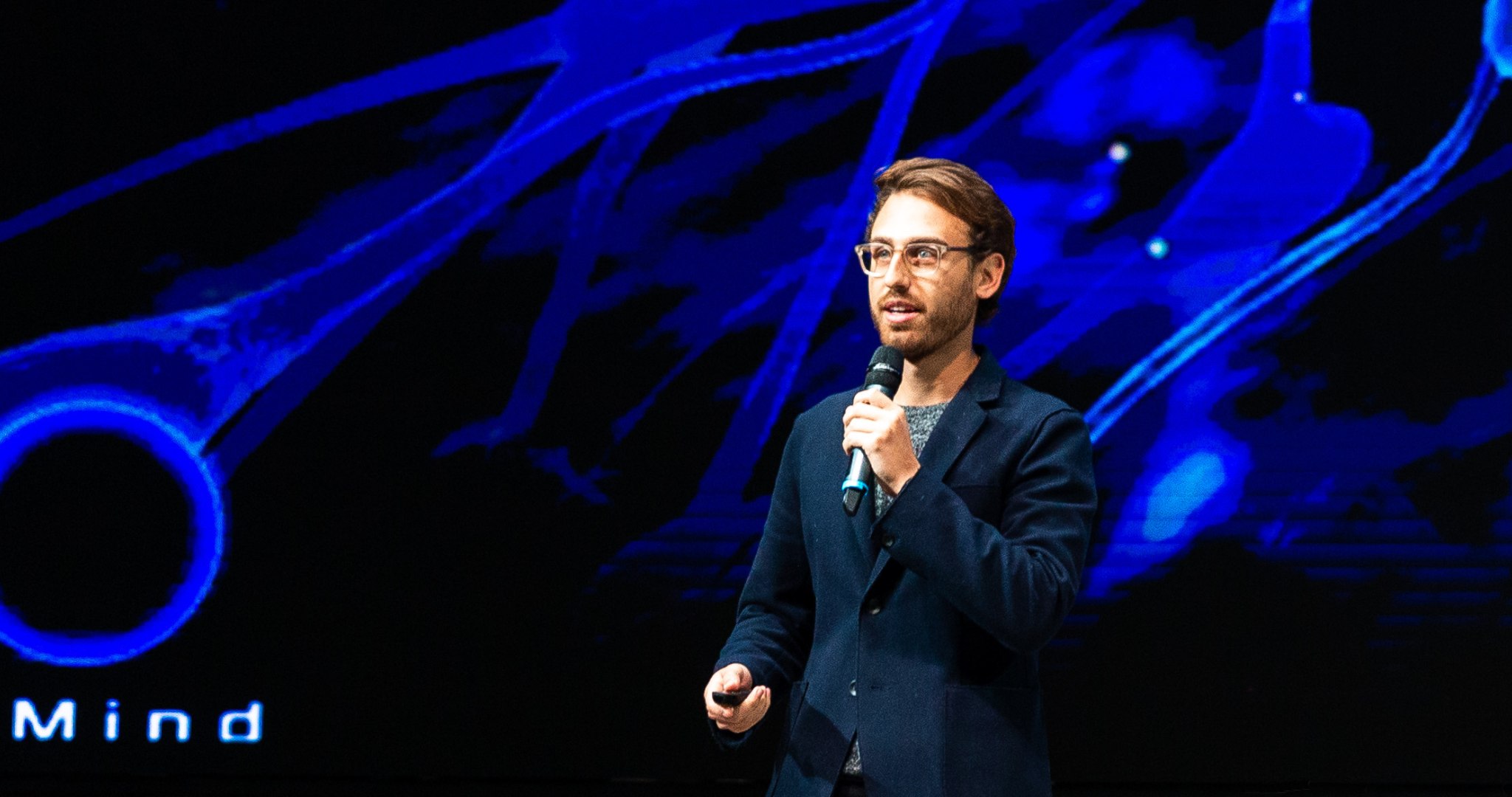 With Covid-19 shaking the foundation of global society as we know it, new technologies like VR and AR have played a critical role in the effort to train healthcare professionals in response to the pandemic. VR training has consistently demonstrated significant benefits for learners, and with the price of VR hardware quickly dropping, the value proposition of using VR training in healthcare and other physically-based industries is becoming ever more clear. With the release of the Oculus Quest headset in May of 2019, the VR industry has seen a significant uptick in users and engagement which is only expected to accelerate now that Oculus has released their new Quest 2 headset for $100 less, retailing at $299. With this growth, VR training has shown to be one of the most promising use cases of this new technology due to its ability to enable embodied and hands-on learning. Where in the past a learner may have passively watched a video or read a manual, with VR training, learners are able to go through the motions. This is especially important for physically based procedures in the medical industry where a single mistake can mean life or death. Recent market research predicts that the VR and AR Healthcare market will have a cumulative annual growth rate of 31% between now and 2023 and generate over $3 billion in revenue, creating significant opportunity for leading VR training startups like Axon Park.

As we’ve seen with this current pandemic, access to personal protective equipment, commonly known as PPE, has been a major issue, and recent studies have shown that upwards of 90% of healthcare professionals are using this equipment incorrectly. While putting on and taking off PPE, technically known as donning and doffing, healthcare workers can expose themselves to the virus and contaminate not only themselves, but also patients, their coworkers, and their families at home. Due to the increased pressure to social distance and save PPE, VR training has become a valuable tool for medical professionals to get practice with the donning and doffing procedure to ensure they don’t make any mistakes when it truly counts. Taylor Freeman, the California based VR entrepreneur and founder of Axon Park and UploadVR, has been working at the leading-edge of VR and education over the last decade. Freeman led the first remote in-VR class at the MIT media lab and was awarded Forbes 30 Under 30 for his work building the VR industry. Freeman and the team at Axon Park responded to the pandemic by developing a series of new medical VR training modules that have been made available in Axon Park’s virtual campus to support frontline healthcare workers. By providing the ability to practice the process virtually, hospitals and other healthcare institutions have been able to save PPE and truly know if their staff has perfected the sequence. Dr. Erik Larsen, the renowned doctor who led much of the disaster response efforts following hurricane Katrina, is quoted on the company’s website saying “this is an excellent training mode for repetitive training in the donning and doffing procedure.” 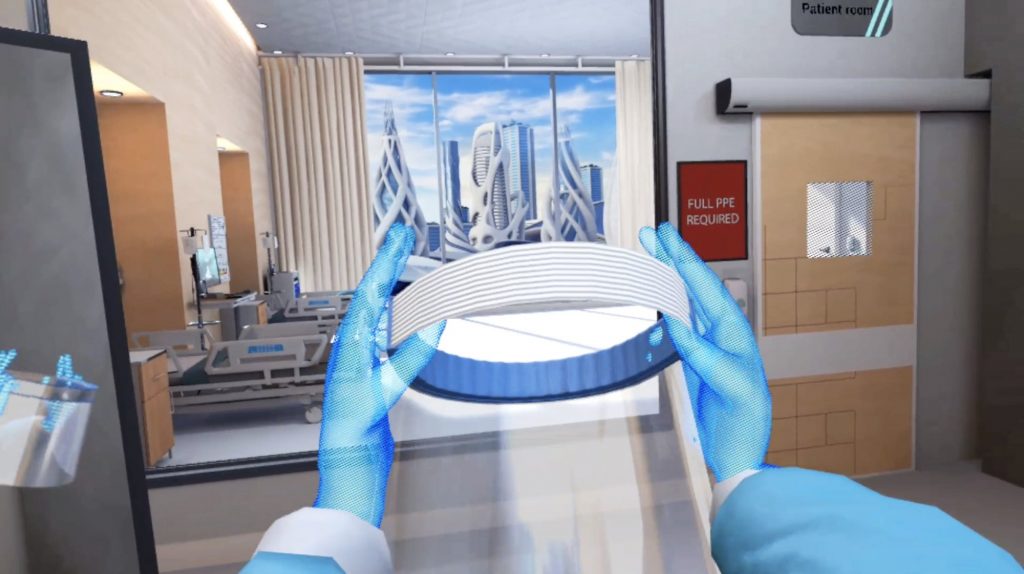 Axon Park utilized their three-cycle training modality to embed the donning and doffing procedure into the muscle memory of users. The program is designed to prepare healthcare workers to perform the PPE donning and doffing sequence with unconscious competence in times of stress during their daily interaction with patients and fellow staff. The three-cycle process begins with a detailed tutorial where learners are led through the correct sequence of donning and doffing as defined by best practices from the Center for Disease Control (CDC) and World Health Organization (WHO). Learners are shown detailed examples of the correct technique, then are required to go through the physical motions to practice each step. The tutorial takes about 15 minutes to complete, and learners are led through the training by an AI tutor named Axon.

Following the tutorial mode, learners enter a training mode designed to provide an environment where they can learn by doing through repetition. If they make a mistake during the donning and doffing process, for example grabbing the wrong item or forgetting a step, they lose points and the environment flashes red while the AI tutor Axon says “Try another option”. This forces the user to think about the correct sequence and try again. If they perform the correct step, a positive tone is played and the user gains points. The goal of the VR training is to get through the module while making as few mistakes as possible.

Finally, once the learner has gone through the training and feels comfortable performing the entire donning and doffing sequence, they enter testing mode where they must complete the final exam. Unlike a traditional written multiple choice test or similar quizzing mechanism, Axon Park leverages the power of the interactive VR environment and Rapid Cycle Deliberate Practice (RCDP) to ensure that users truly understand the process by having them go through each step without making a mistake. If a mistake is made during the testing level, Axon tells users where they went wrong, then they are returned to the start of the test. Given that learners must physically go through each step, it makes it nearly impossible to pass the exam without truly being able to perform the process. 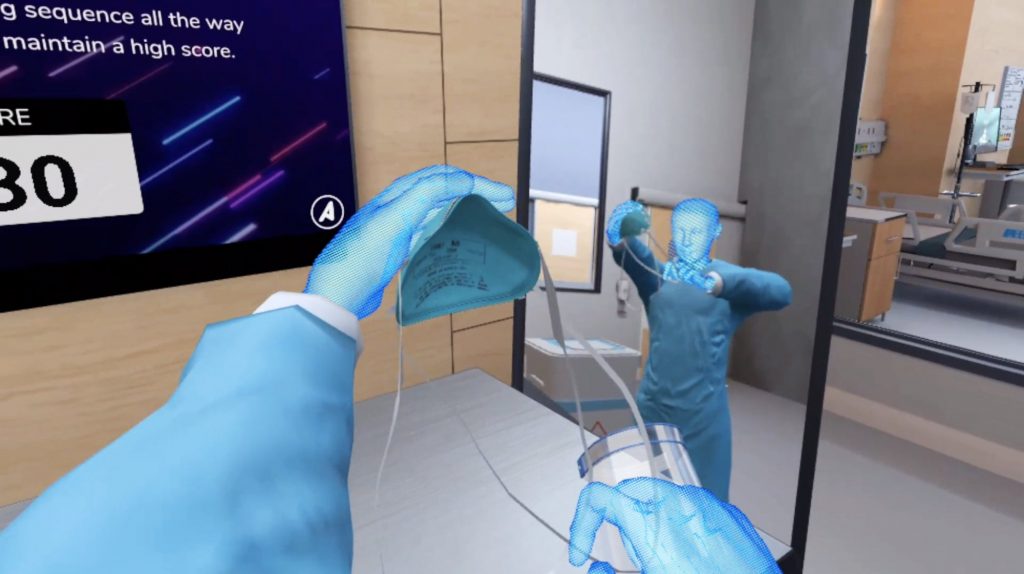 As the learner goes through each training mode, their interaction data is displayed in Axon Park’s real-time admin dashboard, which provides rich analytics about the learners performance during the training. Admin users appear to have access to this backend where they can see in real-time which of their team members have successfully completed each mode of the training. The performance data of learners can then be analyzed using “Intuition”, Axon Park’s predictive analytics engine that helps to identify where individuals are most likely to make mistakes in the future.

Axon Park states on their website “Welcome to your new virtual campus”, and it seems the company is on course to become something like the Coursera or Udacity of VR training. As the technological world continues to progress, and VR hardware becomes less expensive and more powerful, the use case for VR training appears to be an undeniable trend that is only just now starting to scratch the surface of it’s true potential. Freeman, in his keynote at VRAR Days, expressed his ongoing commitment to furthering the field of VR training through the expansion of the “Axon Park Virtual Campus”, where students will eventually have access to many types of training modules in fields such as engineering, design and other industries that can benefit from experiential and spatial learning. Axon Park is rumored to have a study scheduled to start in October as well as additional medical VR modules under development. It seems that we can expect to see a lot more coming out from Axon Park and Freeman as the VR industry continues to progress. 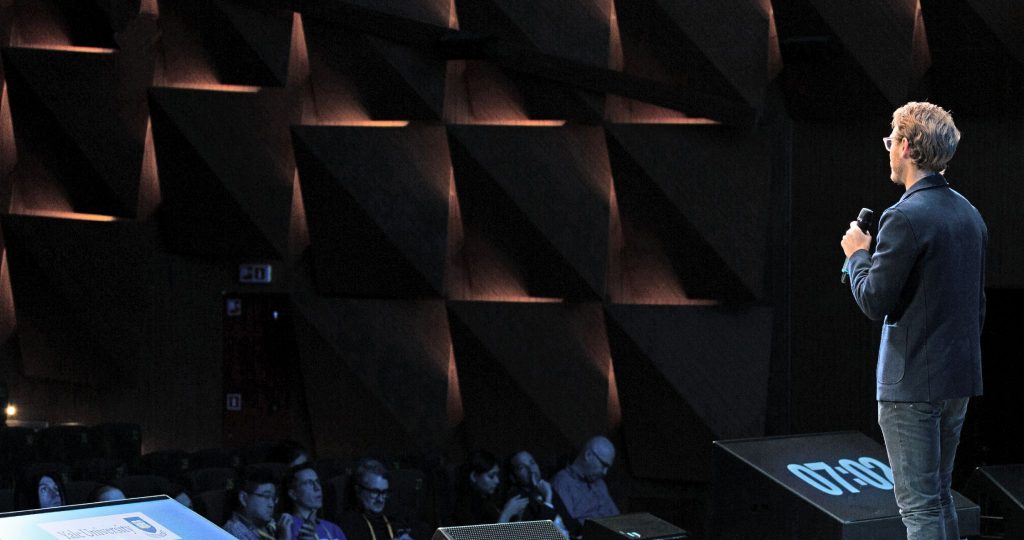 Learn Smart Marketing with this Simple Guide by Maxime Rancon, Founder of the Award-Winning Ad Agency The Rancon Company

Brennen Creer is Trailblazing His Own Path in Sports Business