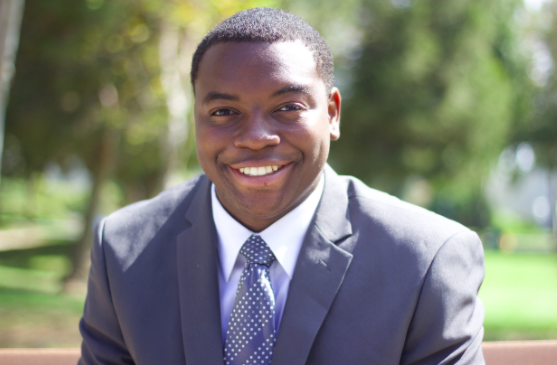 Born and raised in South Los Angeles, Kendrick Jones is a proud graduate of California State University, Dominguez Hills (CSUDH) where he graduated with a Bachelor of Arts degree in Africana Studies and his Master of Arts in Education. Currently, Kendrick is pursuing a doctoral degree at Pepperdine University, where he is studying Educational Leadership, Administration, and Policy in hopes of furthering his career in government affairs towards educational policy reform.

His career in government relations began during his undergraduate year at CSUDH. Kendrick Jones was elected as the student body vice president before he began his graduate studies at the CSUDH College of Education. The opportunity afforded him the chance to lobby at the California State Capitol at just 19 years old, pushing his advocacies on behalf of the thousands of students within the CSU system during the California Higher Education Student Summit.

He then graduated with his Bachelor of Arts degree at just 20 years old and from that moment on, Kendrick Jones continued to work in administration and leadership positions both in the public and private sectors. After serving as the Program Manager for a non-profit organization in Los Angeles, he discontinued his non-profit management career and revamped his political career. After serving as a media consultant for a congressional candidate in California, he completed his graduate studies at just 21 years old.

Kendrick Jones’ success and accomplishments has been non-stop. He has managed to juggle multiple responsibilities and achieve success on all fronts, now,  proudly working in the California State Senate, working closely to assist all of the needs of the district’s constituents. At the bright young age of 23, his work has given him the chance to elevate his passion for community service, and he isn’t stopping any time soon.

He seeks to serve as Chief of Staff for an elected official in the near future and with all of his experiences and accolades, Kendrick Jones has all the right qualifications that are needed to succeed in any position. All he needs now are the right opportunities and platforms for him to showcase his astounding leadership capabilities.

Jones is a beacon of light in a society that tends to downplay the systemic issues that are experienced by many people of color today. He is a young millennial professional that has years of leadership experience, and he is looking for opportunities to dismantle the systems of inequality, injustice, and lack of proper representation. “I know that it will not be easy”, says Jones, “however, I know that it must be done and I want to be the one to help make it happen.”

Being a black man in America, Kendrick Jones has been subjected to negativity simply for having the nerve to exist in a space that is dominated by privileged men. With the media distorting the image of Black Americans through false representation, Kendrick wants to use his voice to incite positive change in society. “The way I see it, we have the power to tell our own stories and write our own narratives. It’s a power that has been taken from us and that we are slowly taking back. So many people have stories that have yet to be told and they are important one’s that need to be heard. I say we open the door and allow room for positive change to be made.”

In the near future, Kendrick Jones envisions himself sporting his doctorate degree from Pepperdine and using his education to influence policies in a more direct leadership position. Kendrick wants to empower people through his story, and in turn, encourages them to tell theirs. There are so many people out in the world who work hard each and every day, and these unsung heroes deserve to be recognized and celebrated.

Find out more about Kendrick James and all his amazing credentials by visiting his LinkedIn profile.