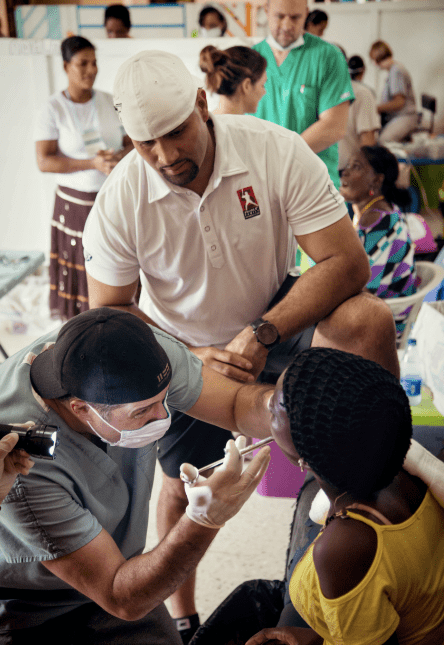 Dr. John Badolato’s path to dental domination has met its fair share of crossroads, but the St. Louis native has found a home in Arizona’s sports market.

Before earning his dental degree from the University of Missouri in Kansas city and opening the doors to Studio B Smiles’ first practice in 2004, Badolato found success in the real estate industry and private investing ventures.

He planned to pursue a career in plastic surgery, practicing as a perfusion tech for a prominent children’s hospital’s cardiac team while attending college. With a bachelor’s degree in biology in hand, Badolato saw the stress surgeons endured every day.

While working in the hospital, Badolato was talking with a surgeon, who told him not to pursue medical school.

“He told me if he had to do it again he would go to dental school,” says Badolato.

The surgeon explained the perks of the dental industry. Dentists work normal hours, there is no requirement to be on-call, and there is no risk of dealing with life-or-death patients — Badolato found his new path in life.

Cosmetic dentistry offered Badolato the best of both worlds. He could help patients improve their self-esteem and practice a career in the medical industry while crafting perfect smiles.

“It  is essentially plastic surgery of the mouth.  I love having the ability to transform smiles and help build self-esteem and confidence.” says Badolato.

After graduating from the University of Missouri’s dental program, Badolato was awarded honors in cosmetic and restorative dentistry and was acknowledged for his hard work and advanced training in cosmetic dentistry.

“One of the biggest challenges I faced as an entrepreneur was figuring out exactly what I know and also what I don’t know, and using that knowledge to develop a sufficient plan,” he says.

Badolato was fortunate enough to partner with his father, Bill Badolato who operated as Studio B Smiles’ Chief Financial Officer. Bill had extensive experience in the field, operating as CFOs for multiple large corporations.  His father also helped Badolato create a unique culture that allowed his team to thrive and achieve sustainable success in a short amount of time.

“He helped create many of the systems that help make Studio B Smiles the successful business it is today,” says John.

Badolato owns two practices in Scottsdale, and Downtown Phoenix where he has partnered with major sports teams to scale his business through the roof. He plans on expanding his franchise to a third practice in Arcadia in affiliation with the Phoenix Suns new practice facility.

“Scaling a business comes down to few key factors: a comprehensive understanding of your patient’s wants and needs, a great team, and effective, efficient and duplicatible systems,” says Badolato.

To keep up with Dr. John Badolato and Studio B Smiles visit www.studiobsmiles.com.