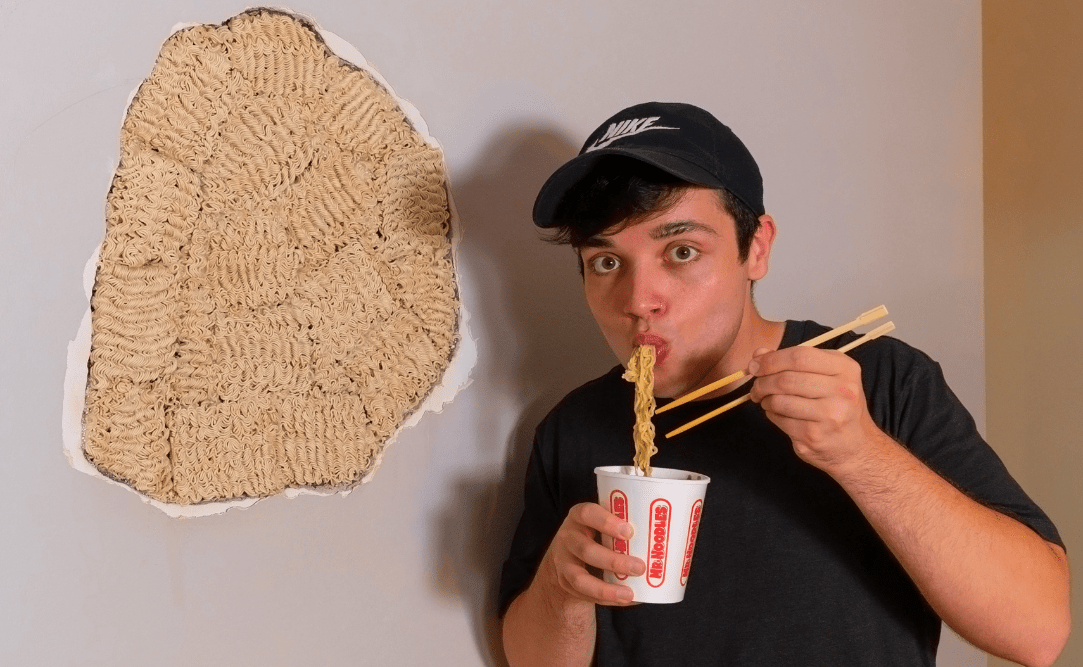 There’s an ever-growing trend of using ramen to fix everything. The trend originated from a TikTok of a man flawlessly fixing his sink with ramen noodles and super glue. From furniture to appliances, people have tried to fix all sorts of things with the use of these instant noodles. But do they hold up? They’ve shown pretty interesting and lasting results which is what motivated Alex Ketchum, the YouTuber and Comedian, to go one step further and use the noodles to repair his wall in his video, Fixing My Wall With Ramen Noodles. You may be asking yourself, why would you want to use instant noodles to fix your wall? And I don’t blame you for asking that, but incase you were wondering, here’s an in depth step-by-step on how to fix that hole in your wall with a pack of ramen.

What do you need to fix your walls with ramen?

Apart from instant ramen noodles, you don’t really need a lot of equipment for this DIY wall repair. According to Alex Ketchum, you’re going to need a ton of packets of ramen noodles, super glue, sandpaper or power-sander, a few tools, and some paint will suffice for your ramen-noodle-wall-fix.

To get started, Alex found a hole in his wall (or rather created one himself with a hammer) to be filled with ramen noodles.

For the number of ramen noodles you’ll need, he got 84 packets, you know just to be on the safe side.

The first thing Alex did was fill in the hole using ramen noodles and super glue. You don’t need to break them into small pieces at this point, as this is more like the foundation of your wall fix. Place the huge chunks of noodles onto the wall, super glue them and cover as much of the hole as possible. According to Alex, the super glue holds them onto the wall pretty nicely.

Next, he filled in the small spaces in between the glued noodles using smaller pieces of the ramen. He also spiced things up by sprinkling the seasoning packet over the glued ramen.

To fill in the remaining gaps, Alex put a few packets of noodles into the food processor and ground them into powder, that was then glued over top the ramen noodles already on the wall. It then ended up looking like a “solidified brick of Ramen” according to Alex.

For the next step, he sanded the entire ramen covered portion to smooth it out. A power sander was used since going in with sandpaper manually would take forever.

Next, he used epoxy combined with ramen to cover up any holes remaining on the top layer. He worked fast to make sure the liquid didn’t dry up and used a scraper to spread it out. Now all there’s left to do is paint.

The final verdict is that, yes you can definitely fix a wall using ramen noodles. Impressively enough it actually created a decently smooth look, and you couldn’t tell much difference between the portion of the wall that was noodles and the rest of it that wasn’t. Alex Ketchum also went on to test the wall by hanging up a picture frame, which held up pretty well. Ironically enough, inside the picture frame was a photo of some uncooked ramen noodles.

So the result was a success, you can surprisingly fix your walls using ramen noodles, you know just incase you run out of dry wall filler. So if you happen to have a hole in your wall that needs fixing, and a bunch of ramen noodles and superglue sitting around maybe give this a try, but personally I’d recommend just sticking to to regular drywall.