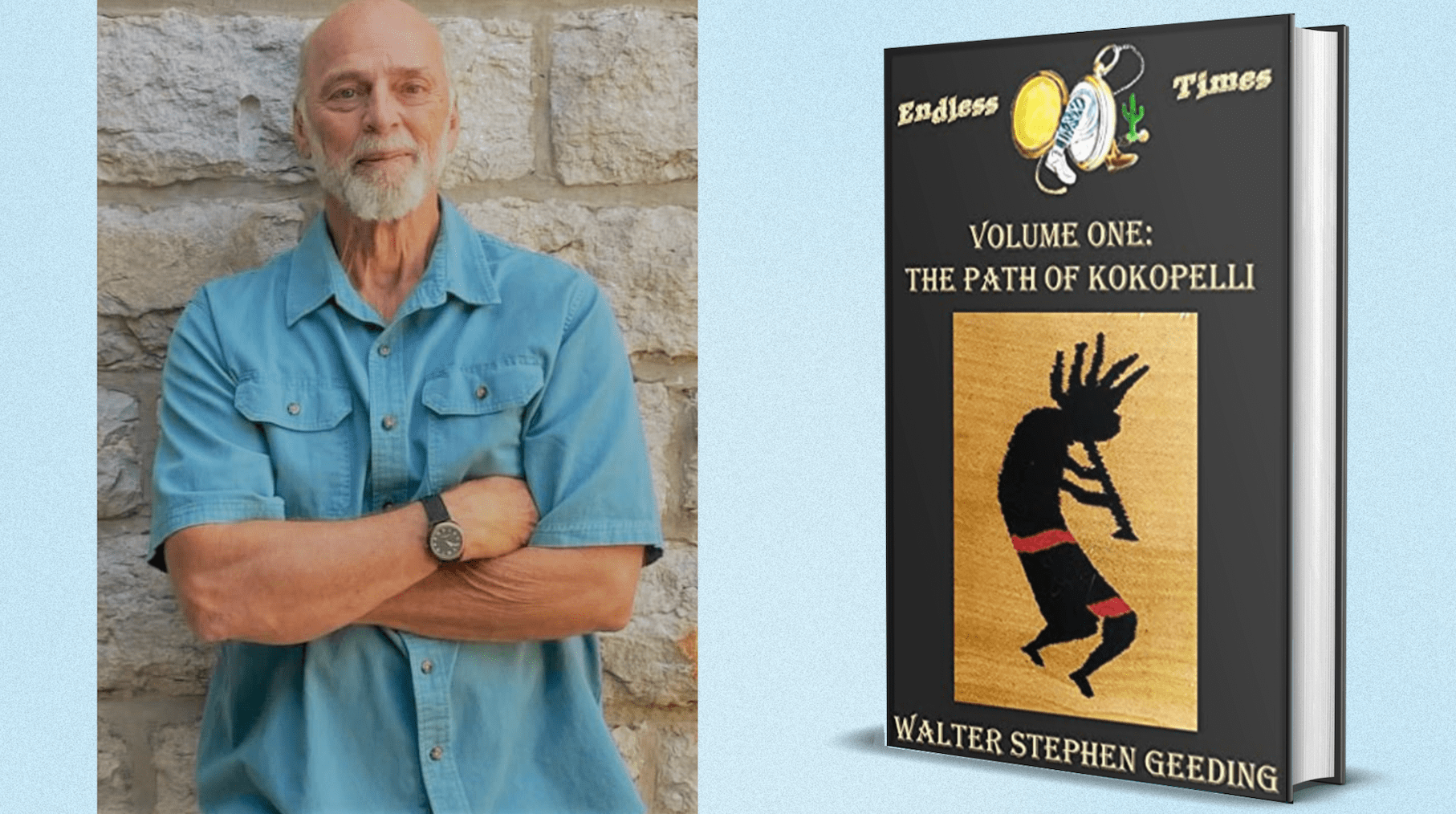 Walter Stephen Geeding is one of those authors, who has you coming back for more, so it makes sense that his book ‘The Path of Kokopelli’ hit the bestseller list. His books are an epic mix of riveting plotlines and fascinating characters, all of which comes together to create a read you will not soon forget. Geeding is also a prolific writer so there is no shortage of books to read and worlds to explore.

‘The Path of Kokopelli’ Jack and Jim, two footloose, lifetime friends and beer drinking buddies, are out back-roading when they spot the cabin. Aha, it’s treasure, treasure indeed, and much more.

As Jack runs out with some little gold figures, deputies start shooting. They have discovered a way to travel the time road disguised as a dilapidated shack. The only problem is those deputies. A “start no violence” command is broken; now, travelers must dodge lawmen. Jack throws the gold back in; time returns to normal. Some old letters reveal the secret: twenty-four figurines, twenty-four destinations; just dodge the law.

After learning to be traders as directed, a year later, they grab Kokopelli and jump into 1822 New Mexico, landing in the middle of some Jicarilla Apache – and the adventure begins. An Adventure that is immersive, riveting and second to none.

We were thrilled that we had a chance to connect with Geeding so we could learn more about storytelling and his epic imagination.

The Path of Kokopelli is a phenomenal read but writing such a book takes a lot of time, dedication, and yes, imagination. How did you come up with such a provocative story?

Kokopelli introduced himself to my wife and me a few years back when we floated the Colorado into Grand Canyon. I’d already gotten the western bug because the west has always held the mysticism of discovery. Enter this little hunched-over man, etched in petroglyphs on canyon walls and everywhere else. I didn’t know him, but he knew me and persuaded my imagination to make him even more famous. The little hunched-back flute player is the god of fertility and good fortune, as well as being known as the prankster god. He’s probably the favorite god of the southwestern tribes, but like all celebrities, he wanted more. Well, later, as my mind drifted around the west, I landed in 1822 New Mexico, and there was my old friend Kokopelli inscribed in stone; every Indian pathway, held his image. Kokopelli is a famous guy in Indian culture down there; so short story long, The Path of Kokopelli was born when he said hi on a float trip in Arizona. That bent-over little guy with his joker attitude just had to become more known, God knows he’s already famous among the Indian nations.

As an extremely creative person, what does success mean to you?

I’d be lying if I said making money wasn’t important, but financial success means being able to pay my friend and editor as I write, and keep the doors open to continue writing. I never started writing to make money, but it’s a necessary evil. I’m all about inventing, putting components together to make common words become something new, an invention. And that is the undeniable pull, arranging everyday words in an original pattern to create new life and invent another amazing story. At the end of the day, to have someone say, “Hey, that was original,” does it for me. True success in my mind is no more than recognition, leaving your mark on the world as a free thinker, what more can there be? Countless people drift through life amassing fortunes, then die. Are they remembered, no; is Huck Finn remembered, Tiny Tim? Sure, they are, immortality is theirs, collaterally so are their creators and not some immense fortune. That, to me, is success.

In many ways, your work illustrates that you are a true visionary. What do you hope readers take away with them when they finish the last page of The Path of Kokopelli?

I hope people realize there is more to life than the computer or I-phone; eating and sleeping, it’s called living while there is breath in your body. Unhook from that big umbilical cord called a computer, try living on your own. Man has always been about self-sufficiency, survival of the fittest, living off your wits. Could you do that today? Unfortunately, very few can, society has forgotten so much, and fears the rest. That is a quality loss of life which hurts all of us. Most want to feel the danger, and savor the craziest most extreme spice of life they can get; provided there’s a safety net. Wake-up call, what happens if computers go down? Life gets real very quickly, you need to feel it, life hurts, fear is exhilarating, mad is cold, tragedy is numbing, take that first step, have a love affair with adventure, extreme danger. Ok, ok, I get it, at least unhook for a while, time really is endless in my world, both in reality and fiction. I live on a continuum where my real-life memories, often unbelievable, mesh with my counter-ego’s fictional exploits. Look up synesthesia, I possess that very real manifestation. Risks are inherent with every journey, so, at least see what’s around the next corner as Jack and Jim continue on in Murphys Diggins. We never had a safety net.

How do you feel the media/technology revolution has changed our intake of stories and storytelling? Has it changed how you tell your stories?

The media/technology revolution has vastly degraded, and in some cases, eliminated the need for an author to be creative enough to carry the story without props. Sadly, our intake of stories, and how they are told, has followed suit. We are an instant gratification society, even in our listening, watching, and hearing expectations. So much of today’s works are big on flash and light on substance. If it’s not believable, make the action full of technical support, and distracting visual manipulations. Unfortunately, a good part of our readers and watchers today, live in an artificially noncompetitive world. Administrative bodies have induced through this procedure shorter attention spans, with even less tolerance for delay in explanation or results. And why not, if there is no competition, why study, much less think through any kind of reasonable answer, deduce logical endings? This attitude of making it happen quickly, finishing the story, we’ll gloss over glaring inconsistencies, has denigrated the world of mass story-telling and visual mediums.

Fast and easy may be the byword for fast and abundant content, but not good content. Research is key to good work. If you need examples of a medium gone south due to an overabundance of inaccuracies and lack of research, look no further than the major part of our news sources; plenty of stories, tons of content; a dearth of accurate reporting. I will not accept shoddy work, either in what I take in or put out. To keep my attention, be accurate in all you do; rest assured, when you read my fictional works, any historical character will be researched and true to life. It’s kind of like ice cream, you can get the cheaper second or third-rate stuff, but close your eyes and taste; you will notice the difference. Now, sample a well-researched story; if you’ve previously enjoyed a good one, you’ll know the flavor.

I know you are working on something new. Can you tell us a little bit about it?

The second volume in the Endless Times series has just been published. Murphys Diggins came out the last week in October of 2022. Jack and Jim take a trip into 1848 California gold rush days. San Francisco is a metropolis of nine hundred souls, Sutter’s Fort still stands, and the dead still haunt Donner’s Pass. Sam Brannon, California’s first millionaire, vies for absolute power with Brigham Young in the Mormon Church. The pair go for money, tempered with a new-found discovery of self-worth. Will limitless wealth and a lawless land tarnish that memory? Killers, lust for gold, two young Indian friends and a wild untamed land challenge the two in ways they never expected. Volume three Making Tracks is being edited, West Coast Turnaround awaits editing, and Gringos is getting started. I’m also trying to finish a children’s book I started writing a year ago. This one is about a tiny runaway frog and his adventures. Cram-it and the Magical Rain Forest is coming along. In between, I blog regularly and write poetry for my website. Check it out, www.walterstephengeeding.com