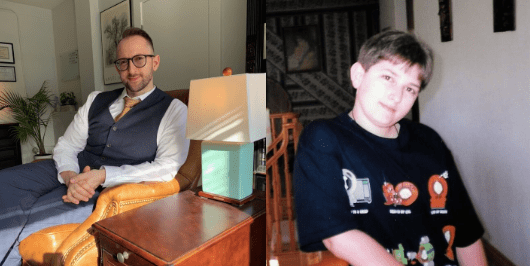 Bullying is the act of coercing or pressuring an individual with the help of fear for various reasons. According to research, being bullied at a young age has led to individuals leading messy lives as they grow up. Although the act ended long back, the effects of it linger till adult life, and sometimes, the feelings never go away.

Similar is the story of Robert Grigore; getting bullied at a young age for being overweight, which was ironic because his father was a doctor (a cardiovascular surgeon to be precise). Robert suffered from deep feelings of shame, guilt and self-hatred, which led to him being disgusted everytime he looked at himself in the mirror.

The emergence into young adult life led to Robert finally shedding his extra body weight. Because he had thought all his problems were because of the way he looked, he now began thinking being in shape would pull his life together. He indulged with many women and finally started hanging out with friends. His social life had taken off and Robert thought he was surrounded by people he loved.

However, he always felt like there was a void that was never filled. To deal with this emptiness, he turned to drugs and alcohol.

As if things were not shaky enough, Robert also got involved in an abusive relationship, in which there was regular fighting and name-calling was a ritual. This was just once incident; Robert had a history of being involved with emotionally and physically abusive girlfriends. It was on a getaway to the Caribbean Island with his girlfriend when Robert finally realised what he’s doing.

After being in an intense physical fight with his then- girlfriend, he ended up alone at a bar. He realized that he had been going through the same thing over and over again. Abuse that he had brought upon himself, being called names and putting up with physical mistreatment. That was when he finally decided that unless he deals with his true feelings and lingering problems, he will be stuck in similar situations such as those in his past. And that is exactly what he did. He embarked upon his journey to start healing.

That was the start of Robert’s journey as a psychotherapist. Later, Robert also wrote a book ‘You NEED Therapy’, in which he talks about the consequences of holding feelings in and bottling them up as a mechanism to avoid them. He says, “pushing problems away does not solve them; it only builds up a volcano inside of you ready to erupt at any moment. That is why it is common to see people having extreme reactions to little problems such as when the waiter gets the order wrong.”

These emotions that are pushed further and further away never leave. In fact, they go round and round and form our core belief system. And according to Robert, these beliefs are the powerhouse that run our lives. If we harbor negative beliefs, we will have a negative attitude toward everything, we will even sabotage ourselves like forcing ourselves to be in abusive relationships much like the story of Robert.

Understanding his own self led to him wanting to help others. And so, he did. The first step to this was truly accepting where he stood in his life. From then on, healing came easy. To break out of his mental chains, Robert faced the truth about his life, and this led to him wanting to get rid of his negativity through which he viewed his everyday situations. The elimination of these negative beliefs was through a process called EMDR, which he now practices himself at his own clinic, Grigore Counselling.

Had it not been for the eye-opening negative experience with his girlfriend that led to Robert realizing his self-worth, the world would be short of one understanding psychotherapist that relates to the problems of others. Indeed, it is important to be able to empathize with what someone is going through to be truly able to help them.