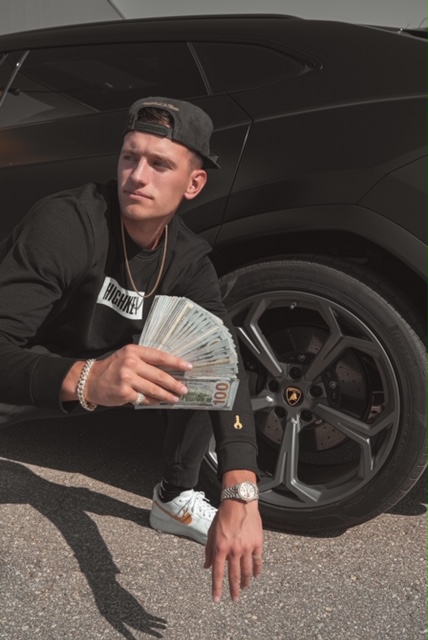 Few people know how to stand out from the crowd quite as well as Jordan Lintz and his team at HighKey. While his business is centered around making other people more famous, Jordan is a trendsetter in his own right, and he’s got the guts and know-how to let that fact take him very far in life. At the age of 23, Jordan owns three companies created under the HighKey brand name, two of which are directed at helping his clients manage and grow their own brands’ social profiles.

Weekly, his companies manage to grow thousands of new followers for their clients, thanks to a structured approach based on consistency and proven strategies. Naturally, Jordan’s companies (and their clients) also manage to stand out through their uniquely captivating flair.

Jordan launched his first company with his brothers when he was 19 and still in college. HighKey Technology is an e-commerce company that quickly rose in prominence and made over $50,000 in sales within the first three months. This first taste of success convinced Jordan to abandon his studies and pursue drop-shipping full-time, instead. However, his long-term goal was always to enter the online marketing industry, which is where his real interests lie.

The HighKey team worked exceptionally hard to get that first company up to a seven-figure-earning business. For the first two and a half years, Jordan was so dedicated to ensuring that the business had as many growth opportunities as possible that he didn’t take a salary. That level of commitment to realizing his goals has paid off for this hardworking young entrepreneur, as the skills and business acumen he gained from that first venture translated really well into his next two companies.

HighKey Agency was Jordan and Luke Lintz’s first foray into the world of social media management. Despite that, he went in already equipped with a deep-seated understanding of the industry as well as an intuitive knack for capitalizing on opportunities at exactly the right time. This allowed him to propel his business toward becoming a leading full-service social media management company that acquires high-profile clients who lack time to grow their own online followings. HighKey Clout, his latest company, takes that idea a step further by offering social growth through big giveaways in partnership with celebrity hosts.

Influencer marketing is a relatively new thing in the world of online marketing. Still, it’s already described as a game-changing strategy thanks to the established engagement that influencers bring to the table. Jordan and his team know this perfectly well, which is why they’re set up to take advantage of everything that social media has to offer. Jordan feels strongly that every entrepreneur and company should be focusing their efforts on social media if they want to grow their brand in a meaningful way.

Thanks to this resolute focus on influencer marketing to push growth, HighKey brand maintains an impressive social media following and uses that to their advantage to boost their clients’ social profiles further, as well.

Check out Jordan Lintz’s Instagram profile, @jordanlintz, for a glimpse into how he approaches online marketing as well as updates on his many plans for the future. “I’m only a few years into my professional business career right now. I have very uncomfortable goals to accomplish in the next 50 years, one of which is to carry HighKey to unimaginable heights,” he says. Only time will tell!