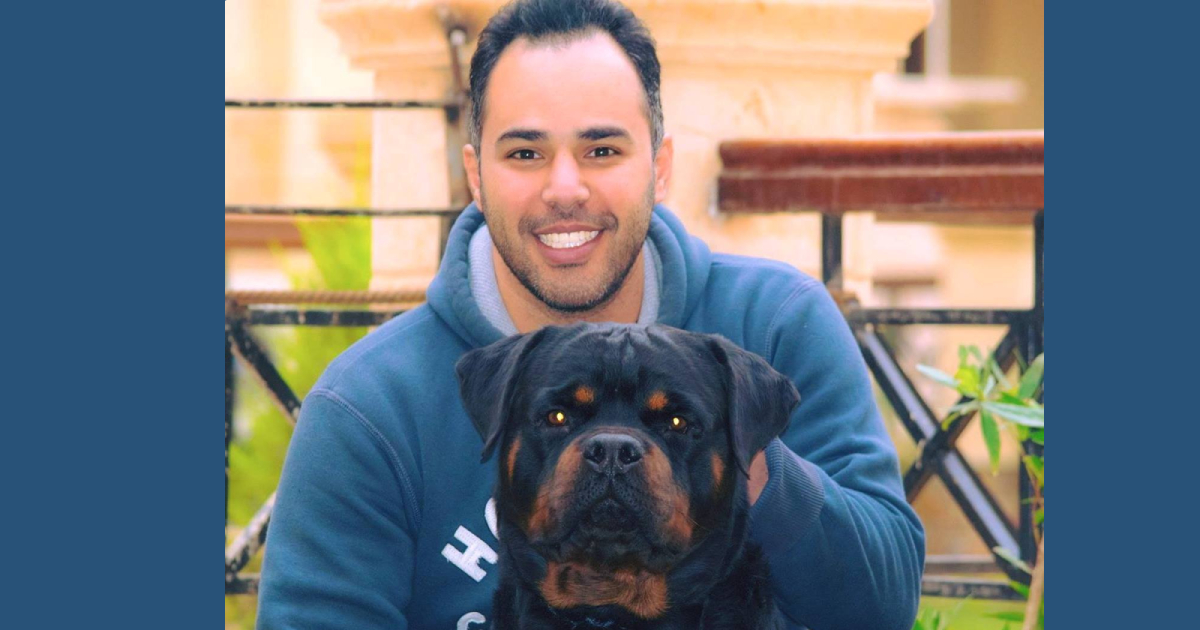 Rottweilers have a pretty bad reputation amongst dogs. There are loads and loads of Rottweilers that are extremely kind, generous, and playful. But the stigma around them portrays them as beasts. And this is the very reputation that Ahmed Sobhy dedicated his entire life to change.

While Sobhy was always passionate about Rottweilers, that was simply not cutting it. It didn’t matter if he loved them; to protect them as a breed, everyone had to be sympathetic to Rottweilers. Precisely why Sobhy brought out a website called Rottweiler Life and a subsidiary Facebook page to the website. As luck would have it, people were interested in learning and knowing more about Rottweilers. And in no time, his website started booming. Now, his Facebook page has close to 1.5 million followers.

There have been many instances in the media where Rottweilers have been said to be dangerous around children. And while there are a few cases here and there, there will always be a difference between trained and untrained dogs.

And this is what Ahmed Sobhy has been trying to portray for ages. Since the beginning, he knew that Rottweilers are a difficult breed to be around. One, because they are big. Two, because there isn’t much information about them around. This is where his website comes to the limelight- it gives a comprehensive guide to everything one needs to take care of their dog. From their history to their maintenance, this is the only guide you will ever need.

Part of the reason why Sohby’s Facebook page and website have taken off so brilliantly is his loyal band of supporters who want to know more. On his Facebook page, he rigorously posts FAQs, where people ask him about the many challenges that come with taking care of Rottweilers. Considering the number of followers he attained in the first three weeks, 200k, he had to take this very seriously. And so he did! His Facebook page is a paradise for dog lovers, who would love nothing better than to give their Rottweilers the love and care they deserve.

But that isn’t all. After his website took off, his fans started clamoring for more. This is when Sobhy brought out his bestselling ebook- Rottweiler Life. This became the Bible for Rottweilers lovers and has secured its position in the Best sellers list in the US. Not just an avid dog-lover, but a keen entrepreneur too, Sobhy’s work ethic led to his blog earning an LLC to become a media company. The company is based in Florida. Sobhy is also the founder of Wow Things Media, something that goes beyond his love for Rottweilers. This company is focused on developing SEO solutions and app developments for its clients.

One can attribute his website’s massive following to his commendable knowledge of Rottweilers. Most sites on the Internet don’t devote their entire space to just one dog, which results in dog lovers missing out on a lot of information. But Ahmed Sobhy’s website provides dog lovers with every bit of information that is out there in the world. Incidentally, they also won the Best Rottweiler Website award in 2014. They have been helping a lot of people understand Rottweilers by breaking the myths that shroud them.

Let’s be clear about one tiny aspect of his work. He isn’t looking to make money off his blog for rottweilers. It is simply his love and passion for them, which made him initiate it in the first place. Being a dog lover, he definitely couldn’t see the mistreatment and prejudice that surrounded Rottweilers. And his blog is simply his way of educating people about Rottweilers and their proper maintenance. This hasn’t been a money-making venture for him.

Sobhy knows that the best way to remove the taint on Rottweilers is to use it in the same way that led to the taint in the first place- media. His website, his Facebook page, and his e-book are all testament to that. While he has been successful in getting people’s interest in this dog breed, he has a long way to go. For this, he has also started the Rottweiler Life Magazine, which comes monthly and provides every single bit of information that is necessary – their care, their upbringing, their diet, training regimen, and their history. Sobhy believes that the development of a Rottweiler depends heavily on its history. Understanding their history would help one deal with their Rottweiler in complete honesty. In fact, one would be able to train their Rottweiler in the way they deserve to be trained. At the end of the day, that’s what matters.

Ahmed Sobhy’s dedication to this cause has resulted in him garnering the success that he deserves. But all this recognition isn’t for him. He wants this for the Rottweilers, who are always suffering from mass prejudice due to negligence by their owners. Anything left untrained would turn out to be wild. And, if a Rottweiler is trained properly, there is no chance of that. That is what Sobhy’s life has been dedicated to making people understand the gentle dog inside that ferocious exterior. His website doles out all the information that people need, from their vaccination to their medication.

But ultimately, it is the people who need to widen their horizons and accept Rottweilers as one of the best dogs to have around us- without fear or distrust.

Meet the hottest top model of the month – Ted Ranghella

Otter PR Finds A Story With Each Client